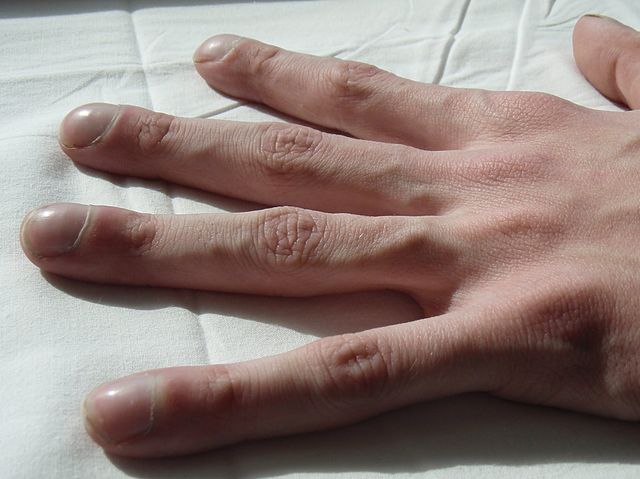 Image: “”Clubbing” of the fingers is a classic feature of Cystic Fibrosis, although not present in many patients.” by Jerry Nick, M.D.. License: CC BY 3.0

This defect disrupts the function of the chloride channel, resulting in the production of sticky secretions by the exocrine glands. The body parts that are most affected include the epithelia of the respiratory tracts, the biliary tracts, the pancreatic duct, the small intestine, the deferent duct, and the perspiratory glands. 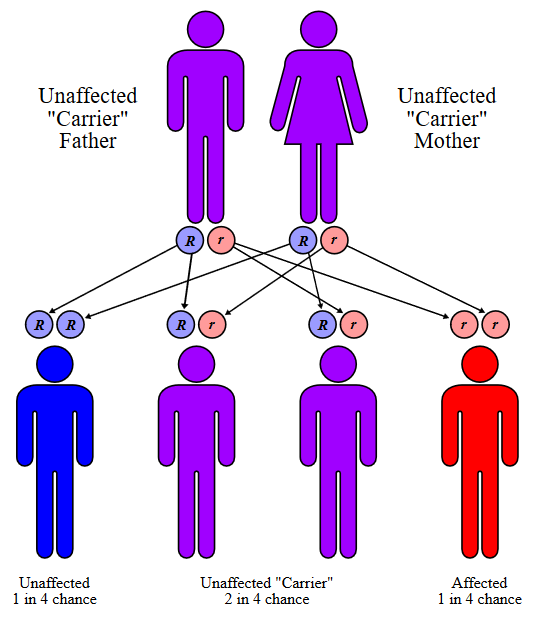 The incidence of mucoviscidosis is higher in Europe than in Africa or Asia. It is about 1:2,500 in Central Europe. The frequency of the heterozygous type in Germany is 1:25, with approx. 8,000 individuals currently affected in Germany, and another 3 million healthy individuals carrying gene mutations that are transmitted hereditarily.

Etiology and Pathogenesis of Cystic Fibrosis

The deletion mutation △F508 is most common in Central Europe and North America, and leads to the loss of the amino acid phenylalanine at position 508 in the CFTR gene.

The type of mutation is crucial in determining the severity of the disease, depending on four distinct scenarios:

As a result of the genetic defect, the chloride channel loses its ability to release chloride and bicarbonate ions from the cell. The increased sodium absorption leads to the formation and accumulation of tough bronchial mucus in the lung (mucostasis), due to the lack of osmotic water absorption from the tissue. The resulting obstipation and inflammation eventually lead to complete organ destruction and functional deficiency. 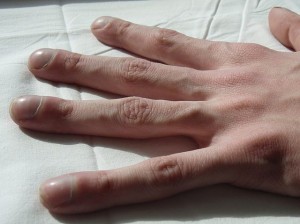 Image: “”Clubbing” of the fingers is a classic feature of Cystic Fibrosis, although not present in many patients.” by Jerry Nick, M.D. License: CC BY 3.0

The increasing lung insufficiency leads to anoxia and exertional dyspnea and bronchiectasis. The oxygen deficiency manifests clinically as Hippocratic fingers and nails. 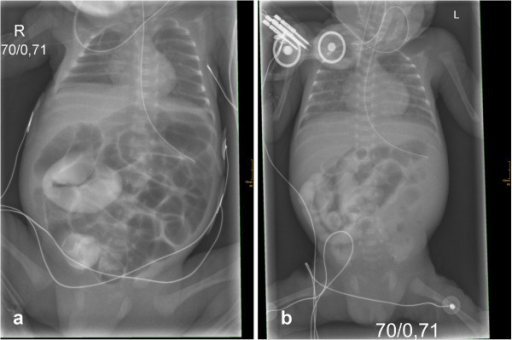 Tough stool can cause rectal prolapse. The manifestation of exocrine pancreatic insufficiency leads to malabsorption of nutrients and liposoluble vitamins.

Due to the lack of digestive enzymes, the body is deprived of macro- and micronutrients that are absorbed with food. Malabsorption, in turn, leads to failure to thrive (dystrophy), despite the increased energy demand.

Male teenagers affected by CF can experience obstructive azoospermia and infertility because of bilateral aplasia and atresia of the deferent duct. 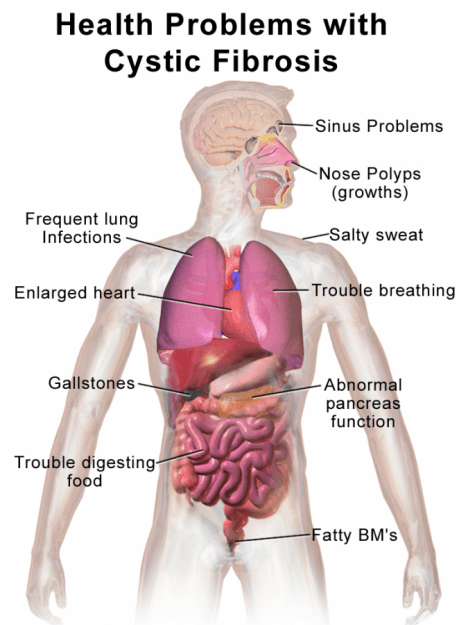 The diagnosis of mucoviscidosis is initially based on clinical symptoms, which is then confirmed by further tests and procedures.

Sweat test
The sweat test is considered as the gold standard of diagnosis and entails determination of NaCl concentration by stimulating sweat using pilocarpine iontophoresis. The chloride ion concentration in the sweat must be > 60 mmol/L in two recordings.

This procedure is indicated for siblings of index patients and those diagnosed with mucoviscidosis, contemplating pregnancy and child birth.

Neonatal screening
In case of suspected mucoviscidosis, a blood test for immunoreactive trypsin is performed as part of neonatal screening. It is, however, not a standard routine procedure.

Note: common diagnostic error: misinterpreting mucoviscidosis as a disease within the spectrum of rheumatic disorders

Once diagnosed, mucoviscidosis requires multimodal treatment where possible. Antibiotic therapy is crucial to attenuate disease progression. A comprehensive overview of the particular pathogens and therapeutics is presented below.

The two different types of antibiotic therapy include:

Long-term prophylactic therapy
This therapy is usually indicated for the treatment of infections due to Pseudomonas aeruginosa. It is administered regardless of symptoms or pathogenic evidence.

Exacerbation therapy
This type of therapy is linked to symptoms and is adjusted to the antibiogram and the specific pathogenic evidence.

Patients diagnosed with  cystic fibrosis live to an age of 30 to 40 years when treated optimally, although 50% of patients die before age 18 from respiratory failure.

The prognosis depends on several factors: