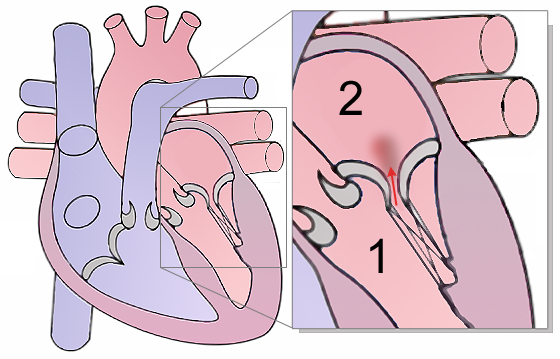 As the second most common disease of the heart valves, the mitral valve insufficiency has various causes but is associated with a favorable prognosis, especially because it can remain asymptomatic for a long time. Good adaptation mechanisms allow the maintaining of the cardiac output. 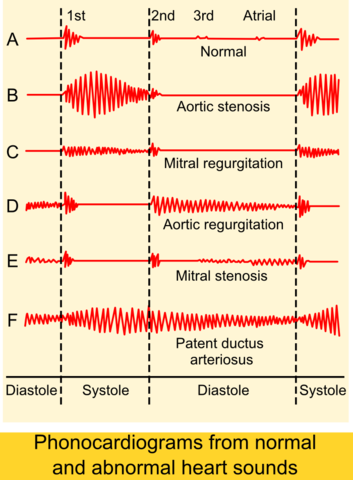 Image: “Phonocardiograms from Normal and Abnormal Heart Sounds” by Madhero88. Licence: CC BY 3.0

A mitral valve insufficiency involves changes of the mitral valve so that it is no longer able to close properly. These changes can affect both the annulus as well as cusp, chordae tendineae, and papillary muscles.

Next to valvular aortic stenosis, mitral valve insufficiency is the second most common disease of the heart valves, with an incidence rate of 2% per year.

A relative mitral valve insufficiency occurs when the reason for the inability to close can be attributed to the dilation of the mitral valve annulus. This can occur as part of a dilated cardiomyopathy. In an acute myocardial infarction, or mitral valve prolapse, as well as a CHD, the chordae tendineae and papillary muscles can be affected.

Calcifications, as well as rheumatic and bacterial endocarditis, may result in a mitral valve insufficiency. Degenerative changes can occur as part of such conditions as Ehler-Danlos syndrome, Marfan syndrome or mitral valve prolapse syndrome.

The 4 grades of severity of mitral insufficiency 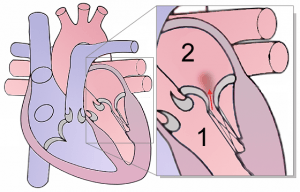 Grade I: Regurgitation fraction < 20%, little contrast agent enters the left atrium; it is completely excreted again in the systole.

Grade II: Regurgitation fraction 20 – 39%, the left atrium fills up completely but is weak after several heartbeats with the contrast agent. 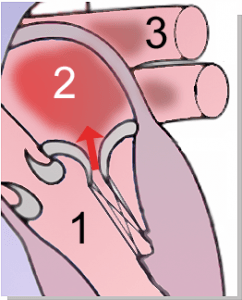 If the mitral valve does not close properly, the blood from the left ventricle is only partially directed into the systemic circulation. The other part is pumped into the left atrium again, and, since the pulmonary veins have no valves, pumped back into the pulmonary circulation. This leads to an accumulation of blood in the lungs and thus to pulmonary hypertension, right ventricular load and right heart failure.

The acute form of mitral valve insufficiency quickly leads to symptoms of heart failure with pulmonary edema, even to cardiogenic shock, due to lack of time for decompensation.

The chronic form may be asymptomatic for a long time and is associated with a good prognosis, since the adaptation mechanisms are very good. Patients may complain of fatigue and dyspnea on exertion. Mitral valve insufficiency is only more pronounced at a higher grade and decompensation: dyspnea at rest and palpitations, as well as nocturnal coughing fits, can occur.

A distinction is made between acute and chronic mitral valve insufficiency. The cause of the acute form is bacterial endocarditis or an acute myocardial infarction. The rheumatic mitral valve insufficiency has a 5-year survival rate of 80%. Generally, the ejection fraction can be maintained for a long time. The progression of the disease should still be monitored every six to twelve months.

Signs during an exam are rare or are based on an eccentric left ventricular hypertrophy. Peripheral cyanoses can be present, as well as a widened and displaced apical impulse. In auscultation, a strip-shaped pansysolic systolic murmur which is heard best over the cardiac apex, whose sounds are propagated into the axilla.

First heard sound is soft, with a wide splitting of the second heart sound.

Signs on the ECG are dependent on the adaptation mechanisms of the heart. In pulmonary hypertension, a right axis deviation, in left ventricular hypertrophy more of a horizontal heart can be seen. The P wave may have two peaks.

On the chest X-ray, an enlarged heart can be seen. Pulmonary venous congestions may also be identified. The valvular apparatus should be assessed using echocardiography. The degree of insufficiency can also be determined.

Conservative treatment of mitral regurgitation includes physical rest, and, if the risk of atrial fibrillation exists, prevention of thromboembolism should be initiated with anticoagulants:

Regular follow-ups ensure that the indication for surgery is not overlooked. Once the contractility of the ventricle is restricted, there is a danger that even a reconstruction will not be able to help produce ventricular function again. Ideally, a mitral valve repair should be carried out. This can be done in a minimally invasive or surgical way. A mitral valve replacement is possible, with a mechanical, as well as a biological, prosthesis.

A complication of mitral valve insufficiency is cardiac decompensation, which may cause pulmonary edema. This can be triggered by atrial fibrillation as well.