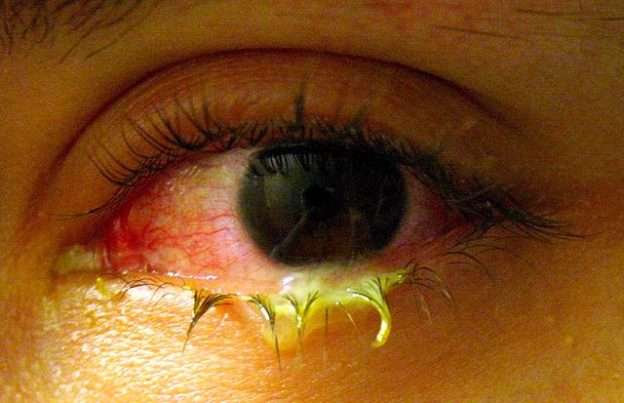 The intrusion of bacteria into a host, either passively or actively, is referred to as an infection (Lat. inficere ‘to put in’) if the proliferation and reaction of the host lead to disease. Bacteria that cause disease in the human body are referred to as human pathogens. 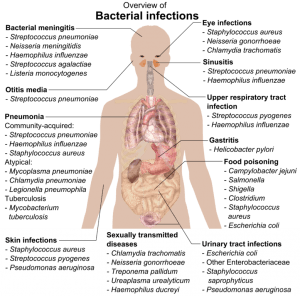 Image: Overview of the main bacterial infections and the most notable species involved. By Mikael Häggström, License: Public Domain

Morphology and Structure of Bacteria

Bacteria range from 0.2–2 µm in size and there are 3 basic bacterial forms comprising the morphology of all eubacteria.

Regarding structure, prokaryotes markedly differ from eukaryotic cells. Although the different types of bacteria vary in metabolism, structure, and virulence, bacteria also possess some common structures. The most important organelles and their functions are listed in the table below (The cell membrane will be discussed in the following paragraph because the cell membrane plays an important role in the classification and treatment of bacteria).

The most important task of the solid cell membrane is to withstand the high osmotic internal pressure of the bacterium and prevent the cell from bursting. The cell membrane of all bacteria consists of peptidoglycans or murein. This grid consists of the polysaccharides, N-acetylmuramic acid and N-acetylglucosamine, both of which are interconnected through short peptide side chains. To better understand the difference between the 2 subspecies (gram-positive and -negative) the gram stain will be explained first.

During the gram-staining process, bacteria are colored using crystal violet and Lugol’s solution. Then, the cells are washed intensively with alcohol and counterstained with eosin (red stain).

Gram-positive bacteria possess a thick cell membrane that consists of multiple layers of peptidoglycans and a thick murein layer. Various proteins, cell membrane-teichoic acid, and a specific polysaccharide can be anchored in the cell membrane. 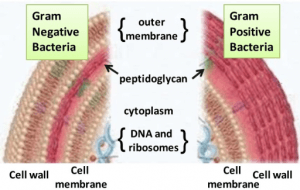 Image: Schematic of the envelopes of gram-positive (on the right) and gram-negative bacteria (on the left). By Filomena Nazzaro et al., License: CC BY 3.0

Gram-negative bacteria possess a single murein layer on the outside of which another 2nd outer membrane is located. This membrane contains, for example, lipopolysaccharides that have an endotoxic effect when the cell breaks down.

Transpeptidases that connect individual components with each other are crucial to the development of a cell membrane. Transpeptidases are an important target for penicillin and other antibiotics.

This article only discusses human pathogenic bacteria. Human pathogenic bacteria are always chemosynthetic (convert carbon into organic matter) and organotrophic (obtain energy from organic substances). The primary means of producing energy is the oxidation of organic substances and the transfer of electrons, such as H+-ions. This procedure is the same in prokaryotes and eukaryotes. Therefore, bacteria use 2 different metabolic pathways.

Respiration is characterized by the transmission of H+-ions to oxygen. Respiration can be aerobic or anaerobic, where oxygen is chemically bound in a type of salt. The energy yield of respiration is approx. 10 times greater than the yield of fermentation.

In the absence of oxygen, another organic compound serves as a hydrogen acceptor. The end-products of this process are alcohol, carbon dioxide, and lactic acid.

The above results in the following classification of bacteria based on metabolism:

Proliferation of Bacteria—Reproduction and Gene Transfer

Bacteria multiply by simple cell division. The 2 daughter cells that result from the original cell have 2 identical (apart from incidental mutations) copies of the genomes. This vertical gene transfer from 1 generation to the next appears clonal.

Therefore, the recombination of genomes as in meiotic reproduction is not possible. Bacteria achieve genetic diversity through horizontal gene transfer, which means the exchange of information between 2 individuals of the same generation. Exchange without meiosis is also referred to as parasexuality.

Transformation is the absorption of naked DNA fragments from lysed bacteria. This occurs without the need for vectors, bridges, or other chemical tools. Some bacterial species possess this natural competence of DNA absorption. Using receptors, bacteria acknowledge DNA strands on the cell surface, and fragment DNA stands into short, single-stranded pieces, and phagocytose DNA stands into the cell interior. If there is a homologous gene segment, the external DNA can mate and take the new information into the genome. This type of gene transfer takes place only within 1 species because the bacteria recognize species-specific DNA.

Via so-called conjugation bridges, individual plasmids between 2 cells are exchanged. The F-plasmid contains the genes that allow the formation of a conjugation bridge and the passing of a plasmid. The bacterium that contains the F-plasmid represents the donor cell and its partner, the recipient. The donor cell forms F-Pili (pilus – Latin ‘hair’), which establishes contact with the recipients.

Afterward, the pili shorten and fuse, so that a pore or a short bridge is present between 2 bacterial cells. Due to the rolling-cycle mechanism, a single strand of the plasmid can be synthesized, which is then later completed in the recipient to a double F-plasmid form. The recipient now can also pass as a donor of the F-plasmid. 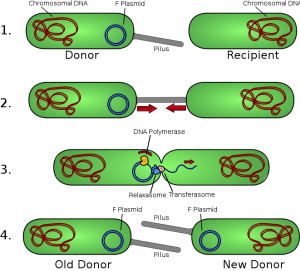 This gene transfer is only unidirectional (in 1 direction). Donors and recipients are sometimes abbreviated with F+ and F– in the literature.

Growth curve of a bacterial population

The proliferation of a bacterial population follows a typical growth curve. It can be observed by exposing a particular number of bacteria in nutrient agar. After an initial slow cellular growth and adaptation to a new environment (lag phase), the population starts to rapidly divide, which quickly results in exponential growth through numerous cell divisions (log phase). During the deceleration phase, the cell growth slows down and culminates in a stationary phase. The bacteria count increases to up to 109 cells/mL. Due to nutrient exhaustion and increased toxic degradation from cellular overcrowding, the death phase commences. 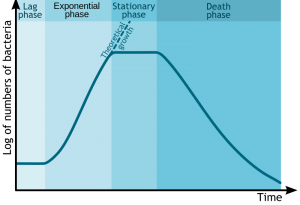 The exponential growth of bacteria shows that the treatment of bacterial infections should be initiated quickly and that waiting can cause a proliferation of pathogens with fatal consequences. However, the growth rate depends on the supply of nutrients and other environmental conditions.

To estimate the growth rate of bacterial strains, generation time (T), which represents the time it takes a parent cell to divide into 2 daughter cells or the time for a doubling of the bacterial population should be determined.

T/t indicates the number of generation times or divisions.

Using logarithms, the equation is:

The virulence of different species can differ widely. Virulence is specified using LD50 (lethal dose 50), which represents the dose at which 50% of an infected test group dies. In bacteria with strong virulence, there are only minor differences between LD50 and the dose at which 100% of the individuals in a test group die. An example of this phenomenon is Streptococcus pneumoniae. The LD50 cannot be determined because only a few cells of S. pneumoniae are able to kill an entire test group. In contrast, there is a clear demarcation between the LD50 and LD100 of Salmonella enterica. Pathogen dose of approx. 100-fold more 100 times more is required to kill the entire test population than to kill 50% of the test objects.