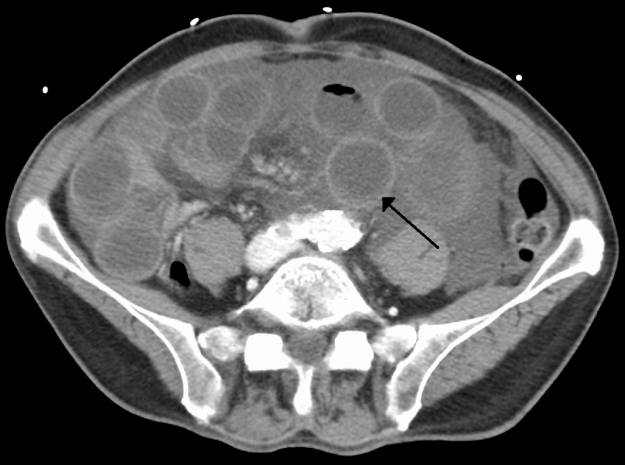 Image: “CT of an ischemic bowl due to thrombosis of the superior mesenteric vein. Note the dilated bowel with a thickened bowel wall” by James Heilman, MD. License: CC BY-SA 3.0

Infarction and necrosis through the mesenteric ischemia

It is a rare but life-threatening syndrome caused by inadequate flow of blood through the mesenteric vessels resulting in ischemia and gangrene of the bowel wall.

The mesenteric infarction is the acute closure of an intestinal vessel, which leads to the critical insufficient supply of blood to the intestine with infarction and necrosis of the portion supplied through the vessel. It can be either an infarction of an artery or a vein around the closure. 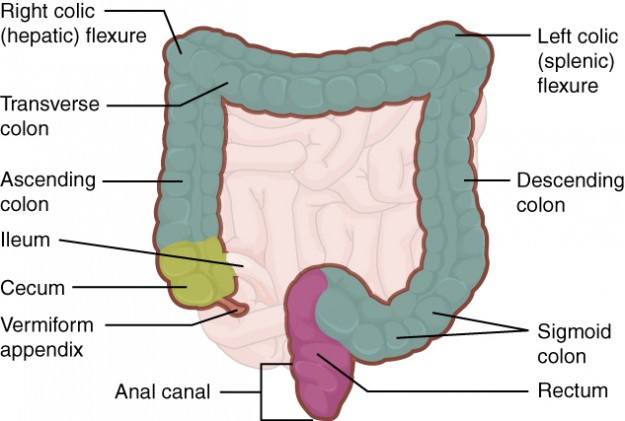 The disease has no sexual predilection, but men are thought to have a higher risk of atherosclerotic disease that is a risk factor. Women on oral contraceptive pills have an increased risk too.

Broadly mesenteric ischemia can be:

It is further subdivided into:

It can take the form of

It is predominantly thrombo-occlusive and thus it is commonly known as mesenteric vein thrombosis (MVT).

The acute vascular occlusion affects about 85% of the superior mesenteric artery, which is predisposed due to its large caliber and the narrow-angle of departure from the aorta for embolism. Closure of the inferior mesenteric artery usually has a mild course, since it supplies a smaller part of the intestine. In 50% of the cases, it is about arterial embolism. The embolus is thereby usually of cardiac origin and is produced, e.g., during atrial fibrillation in the left atrium, in the case of endocarditis or a heart wall aneurysm.

In 20—30% of the cases, it is about the seal-less infarction, also called nonocclusive mesenteric disease (NOD). This leads to reduced perfusion of the splanchnic area here through an extreme α-adrenergic stimulation with a reduction of the cardiac output. The causes can be cardiac insufficiency, heart attack, marathon running, vasospasm, glycoside treatment or long-term high doses of catecholamines.

A 3-phase course is typical of the mesenteric infarction.

Note: Melena is a warning sign at the stage of the ‘false peace’ and should lead to an aggressive diagnosis like exploratory laparoscopy without further loss of time.

Detection of a mesenteric ischemia

Especially in elderly patients with acute abdomen, it is important to think of a mesenteric infarction in the differential diagnosis; in particular, if the patient indicates to have recently noted ‘heart stumbling’. Further risk factors in the anamnesis are the following:

In the case of clinical examination, the abdomen is usually soft with diffuse tenderness during the symptom-free interval. An indication of a mesenteric infarction is given by blood on the finger stall during the digital rectal examination.

Typically, the lactate, the lactate dehydrogenase, and the hematocrit are increased in the routine laboratory due to fluid loss and there exists a metabolic acidosis due to hypoxia in the blood gas analysis; even a leukocytosis is not atypical.

Note: Serum lactate level over 20 μg/mL is almost conclusive at a sensitivity and specificity above 90%.

Indication of the etiology of mesenteric infarction during atrial fibrillation or heart attack may occur in the electrocardiogram (ECG).

Ileus can be detected in a conventional X-ray from the 2nd stage onwards, while it is still unremarkable in the 1st stage. It can also be detected by sonography. The advantage of sonography is the fact that by duplex sonography, the ischemia can be self-represented.

Image: Computed tomography (CT) scan of an ischemic bowel due to thrombosis of the superior mesenteric vein. Note the dilated bowel with a thickened bowel wall. By James Heilman, MD, License: CC BY-SA 3.0

The angio-computed tomography is best suited to rule out other causes of an acute abdomen and is considered the standard investigation per the contraindications. It must necessarily be carried out, even in the lateral projection. Also, the intestinal wall edema and vascular occlusion can be detected here.

The method of choice for the detection of an arterial vascular occlusion in the case of uncertainty of the diagnosis is the conventional celiacography/mesentericography or magnetic resonance (MR) angiography.

Note: Continuous central artery segments in the angiography do not rule out a heart attack.

The treatment of mesenteric ischemia begins with initial stabilization of the patient using immediate measures such as:

If you suspect a mesenteric infarction, an exploratory laparotomy is indicated. Immediate measures that should be taken, even before, are the conditioning of a nasogastric tube to relieve the intestine, the fluid and electrolyte replacement, correction of acid-base balance, and intensive monitoring.

The palpation of the vessels is carried out intra-operatively for the localization of the vascular occlusion; thereafter, an embolectomy, desobliteration or bypass supply follows. Also, a thorough inspection of the intestine for the identification of necrotic sections, which must necessarily be resected, is important.

The assessment of the vitality of an intestinal loop occurs intraoperatively by inspection of the color, which should be rosy, the peristalsis, which can be triggered by knocking, and the pulsation, which must be both centrally as well as peripherally available. Even the arterial bleeding from the cutting edges is important for assessing.

If doubts exist here, the intestinal loop is wound for 10 minutes in wet wipes and then re-assessed. If an intestinal section is not completely removed, it can perforate and lead to peritonitis. The production continuity is carried out through an end-to-end anastomosis, but often only 1 discontinuity resection and drainage are possible in case of intestine ends remaining in situ as stomata.

About 12 hours after the primary operation, a 2nd-look operation is necessary, to ensure that the remaining sections of the intestine are sufficiently supplied with blood. A re-laparotomy is necessary in the case of newly emerging, persistent signs of peritonitis, again increasing lactate levels or angiographic evidence of re-occlusion.

Note: In the case of extensive infarction with the inclusion of the duodenum, there is no possibility of restoration – neither by resection nor by small intestine transplantation. Life-prolonging treatment should generally be avoided in this situation; a therapia minima is recommended.

Conservative treatment is indicated in non-occlusive mesenteric disease with no evidence of peritonitis. You must necessarily be in the intensive care unit (ICU) under cardiological care. The basis is the treatment of the underlying disease to eliminate the vasoconstriction and intestinal ischemia. If there is a reasonable suspicion of intestinal wall necrosis in the NOD, the infusion of papaverine or prostavasin as antispasmodics via an arterial catheter may take place.

Note: In case of signs of peritonitis, the patient must immediately be brought to surgical therapy. 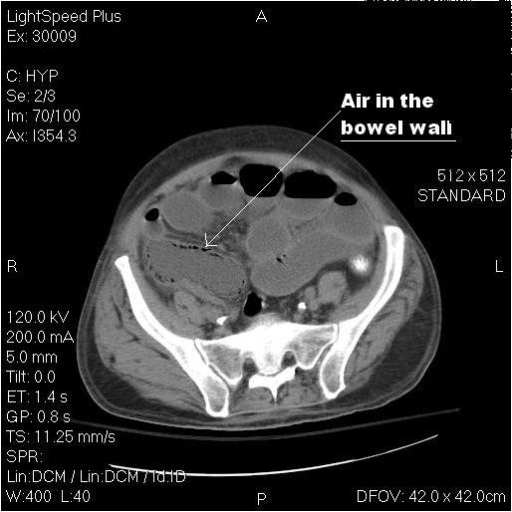 In the early phase of mesenteric infarction, interventional therapy comes into question. A catheter-directed thrombectomy or embolectomy by Fogarty catheter and the selective introduction of lytic drugs are used.

The full heparinization until the conversion to oral anticoagulants is a part of the post-treatment, as soon as the healing has been fully completed, if the embolic risk still exists.

Even the highly dosed broad-spectrum antibiotic is important to avoid peritonitis. During the operation, intra-abdominal swabs should be made so that the antibiotic can be customized.

Postoperative complications in a mesenteric ischemia

Relapse, suture insufficiency, sepsis and kidney, lung or liver failure are among the postoperative early complications. As a late complication, it may result in malabsorption and short bowel syndrome with fluid and electrolyte losses through large resections.

Lethality in a mesenteric ischemia

In the early stage, the prognosis is good for immediate therapy. The operative lethality is about 5%. Depending on the ischemia time, the lethality increases rapidly. After 12 hours, it is 30%, after 24 hours, it is approx. 85 %.

In most cases, the lethality is high because the diagnosis is carried out late. The resection must be large and mostly elderly patients in a rather poor condition are affected.

The acute mesenteric infarction cannot be clinically differentiated from the mesenteric vein thrombosis, which is why they are often only distinguishable from each other by laparoscopy. Possible symptoms are diffuse abdominal pain, and intestinal paralysis, and an emerging ascites, whereby the less painful and slow onset is typically in contrast to arterial occlusive. 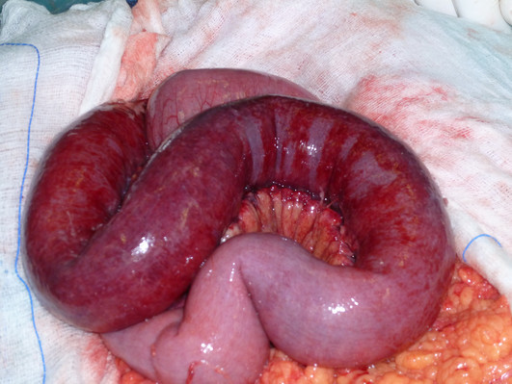 The lethality in the case of an acute mesenteric vein thrombosis is about 20–40%.

Ortner’s Syndrome as a Special Form of the Visceral Arteries

Definition of the Ortner’s syndrome

Ortner’s syndrome, also known as abdominal angina, is the chronic occlusion of visceral arteries, whereby it results in the intestinal claudication with typical symptoms. The patients are usually older than patients with acute mesenteric infarction.

Etiology of the Ortner’s syndrome

Chronic mesenteric circulatory disorders can be caused by arteritis such as thromboangiitis obliterans or periarteritis nodosa, fibromuscular dysplasia or by external compression as in tumors or lymphomas. Since the celiac trunk, as well as the superior and inferior mesenteric artery, are connected via the gastro- and pancreaticoduodenal artery and via the riolan anastomosis, the chronic closures remain asymptomatic for long because of adequate collaterals.

The ischemic colitis is also a frequent complication after the implantation of an aortic prosthesis with ligation of the inferior mesenteric artery.

Symptoms of the Ortner’s syndrome

The typical triad of symptoms of intestinal angina in the case of closure of the superior mesenteric artery consists of postprandial pain, malabsorption with weight loss, and abdominal vascular murmur. Seldom, however, all 3 symptoms are present.

The most common is the 10—30 minutes postprandial-occurring dull abdominal pain. It is peri-umbilical localized and lasts for 1–4 hours. The cause is the increase in blood flow by 10–20 times after the food intake. The flow rate reserve is however limited, whereby it results in the relative circulatory distress of the intestine with pain syndromes. The pains prevent the patient from ingesting large amounts of food. This results in a weight loss accompanied by malabsorption.

It occurs in 4 stages:

Other atherosclerotic lesions such the peripheral artery disease (PAD) or congestive heart failure (CHD) are often found in the patient’s medical history. In the clinical examination, stenosis sounds can be auscultated over the abdominal vessels.

The evidence of the chronic intestinal vaso-occlusive processes usually works out angiographically. 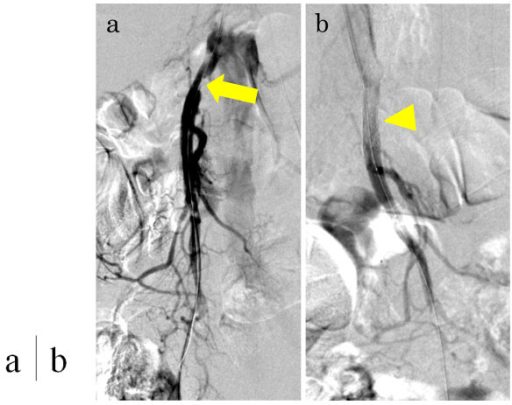 Treatment of the Ortner’s syndrome