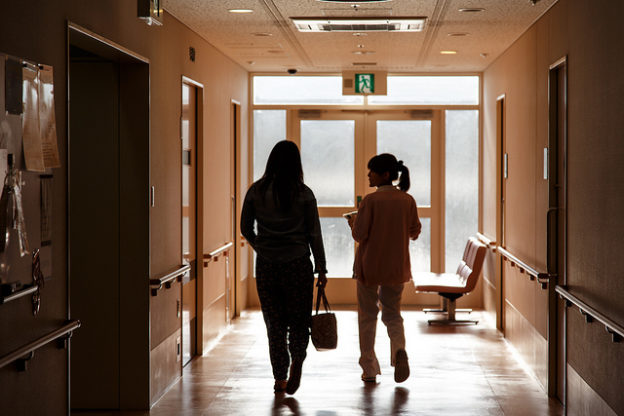 Image: A female patient and nurse walking in the obstetrics and gynecology department. By: seapachi. Licence: CC BY-SA 2.0

The term “premenstrual syndrome,” or PMS, refers to the emotional and physical changes that occur before a woman’s menses begin. Premenstrual syndrome is usually diagnosed based on a daily record of symptoms and their temporal relation to the different phases of the menstrual cycle. As every patient’s symptoms are different, they need to be observed for at least three menstrual cycles for a diagnosis to be made.

It is important for a correct diagnosis to be made, as other conditions, such as clinical depression, may mimic the signs of PMS. Once the diagnosis is confirmed, treatment should be based on three main elements: lifestyle modification, medical intervention, and psychological support. Nonsteroidal anti-inflammatory drugs, new-generation oral contraceptive pills, and antidepressants are the main options for the symptomatic management of PMS. Increasingly, women with PMS are also using herbal interventions.

PMS is the recurrent deterioration of a woman’s quality of life within the luteal phase of the menstrual cycle. It is characterized by physical and psychiatric symptoms. Premenstrual syndrome spectrum comprises three main conditions: molimina, PMS, and premenstrual dysphoric disorder (PMDD); molimina is the least severe, and PMDD the most.

Molimina is a condition that is experienced by about 90% of women during the reproductive years. It is characterized by breast pain, bloating, food cravings, fluid retention, sleep problems, acne, and constipation. These symptoms usually occur before menstruation, during the luteal phase of the cycle. Bloating is usually subjective and weight gain is rarely documented. The term PMS is vague and poorly defined, but is generally used when symptoms are slightly more severe compared with molimina alone.

PMDD is characterized by more severe symptoms that affect a woman’s quality of life and daily routine; work, relationships, and other aspects of life can be affected. The symptoms of PMDD are mostly psychiatric, and the diagnosis is now recognized in the Diagnostic and Statistical Manual of Mental Health Disorders (5th edition; DSM-5). There is no clear understanding of exactly what causes PMS, but because levels of hormones, such as progesterone, keep changing in a woman’s body based on the phase of the menstrual cycle, many researchers attribute the syndrome to this variation in hormones.

Because the definition of premenstrual syndrome can be vague, its frequency is believed to be under-reported, especially in younger women. The average age at which a woman is likely to seek treatment for PMS is in the early 30s. Women who experience mood swings and psychological symptomatology often attribute their symptoms to hormonal changes or stress instead of PMS. Women aged between 25 and 35 years are more likely to have PMS symptoms. It is estimated that 60%–80% of all women of reproductive age will experience molimina, PMS, or PMDD.

The symptoms of PMS occur within the luteal phase of the menstrual cycle, are recurrent, and are severe enough to alter a woman’s quality of life. Symptoms may be psychological, physical, or both. Physical symptoms such as breast pain are typically cyclic.

To improve the definition of premenstrual syndrome and make it easier for researchers to study the condition, strict diagnostic criteria are outlined in the DSM-5. At least five symptoms should recur in most menstrual cycles and be present in the last week before the onset of menses, and they should improve within a few days after the onset of menses. Symptoms should disappear 1 week after menses.

One or more of the following emotional symptoms needs to be present:

One or more of the following physical symptoms needs to be present:

The five emotional and physical symptoms should cause significant impairment with work, school, and social life. Symptoms cannot be attributed to an existing psychiatric condition. The appearance and disappearance of these symptoms in relation to the patient’s menses should be confirmed through prospective daily ratings over at least two symptomatic cycles.

Symptoms should not be able to be explained by substance abuse, medication, or other treatment. Medical conditions that are known to be associated with similar symptoms, such as hyperthyroidism, should also be excluded.

The documentation of emotional and physical changes can offer insight on whether a woman is experiencing molimina, PMS, or PMDD, as no one test can be used to diagnose PMS. Although laboratory investigations are indicated to exclude other causes such as anemia, leukemia, and hyperthyroidism, women with PMS do not have any specific changes in their endocrine, biochemical, or routine blood work.

Some patients with severe and nonspecific symptoms of PMS are found to have a brain tumor; thus, when patients have significant baseline symptoms, a brain magnetic resonance imaging study may be indicated. There should be no symptoms at all within the baseline of the menstrual cycle (i.e., the follicular phase).

The treatment of PMS consists of psychological support, diet and lifestyle modifications, and medical intervention.

The condition’s etiology should be explained to the patient and their family, if they are also affected. Small, frequent meals during symptomatic days have been found to alleviate symptoms. Consuming less salt, more fruits and vegetables, and less sugar and fat are also recommended. Avoidance of alcohol, caffeine, and cigarettes can decrease the severity and frequency of symptoms.

Stress management and sufficient sleep are also effective management practices. Calcium supplementation has been proven to improve the symptoms of PMS in small randomized controlled trials. Exercise, especially running, can decrease the severity of symptoms of molimina and PMS.

Mefenamic acid 500 mg three times a day is often used for the management of premenstrual and menstrual symptoms. Typical oral contraceptive pills are not useful in managing the symptoms of premenstrual syndrome; however, combined oral contraceptives that contain drospirenone are proven to be superior to a placebo in managing symptoms of the disorder. Pyridoxine can help manage symptoms of molimina. Pyridoxine was found to be as effective as a placebo, but the placebo effect in molimina is significant.

The management of breast tenderness is usually based on the administration of danazol. The use of diuretics, progestin therapy, or evening primrose oil has not been found to bt useful in managing PMS and should therefore be avoided.

Antidepressants, such as fluoxetine or venlafaxine, can be used to manage the mood swings and tearfulness that are experienced by some women with PMS. Very-high-dose danazol is known to suppress ovulation in most women and can achieve complete resolution of symptoms. This approach should be reserved for patients with severe symptoms who do not respond to other treatment options. Other methods that induce anovulation, such as the use of gonadotropin-releasing hormone agonists or surgical therapy, may also be considered in severe cases of PMDD.

Vitamins D and B6, wheat germ, and lemon balm may also help with symptoms. Alprazolam can be administered but only in the last 2 weeks of the menstrual cycle, as it is highly addictive. Contraceptive implants and estradiol patches can also improve symptoms.