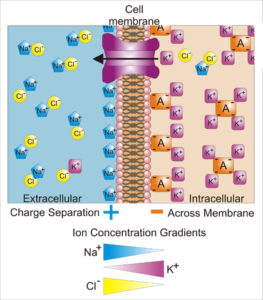 Image: “Figure 1.0: Diagram showing the ionic basis of the resting potential” by Synaptidude. License: CC BY 3.0

Figure 1.0 shows that the inside of the cell is more negative than the extracellular environment. This is because of the cell membrane’s permeability to certain ions and the numbers of those ions.

The concentrations of certain ions in the intracellular and extracellular environment are listed in the table below:

Table 1.0: Concentration of ions across the cell membrane.

The principal anion is chloride, which is mainly extracellular.

The membrane potential is measured with the help of a microelectrode, as shown in Figure 2.0. 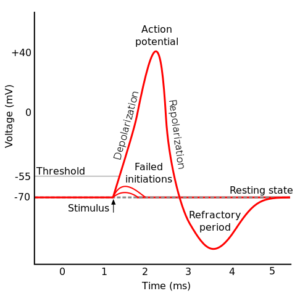 Image: “Figure 3.0: Schematic of an action potential” by Original by en:User: Chris 73, updated by en:User: Diberri, converted to SVG by tiZom – Own work. License: CC BY-SA 3.0

During the resting membrane potential, the sodium-potassium pump uses adenosine triphosphate (ATP) to move three sodium ions out of the cell and two potassium ions into the cell. This creates negativity inside the cell. In addition, there are leaky potassium channels that allow K+ to diffuse out of the cell. The cell membrane is said to be polarized, as shown in Figure 3.0.

Action potential is generated in the presence of a stimulus. The nerve endings are stimulated by a change in the environment, which results in the opening of sodium channels. Sodium ions move into the cell, and the membrane is said to be depolarized.

A stimulus opens some sodium ion channels, which decrease the negativity inside the cell slightly. If the threshold potential is reached, all sodium channels open, and more sodium ions move into the cell.

Once generated, the action potential moves along the entire length of the membrane until the entire membrane is depolarized. 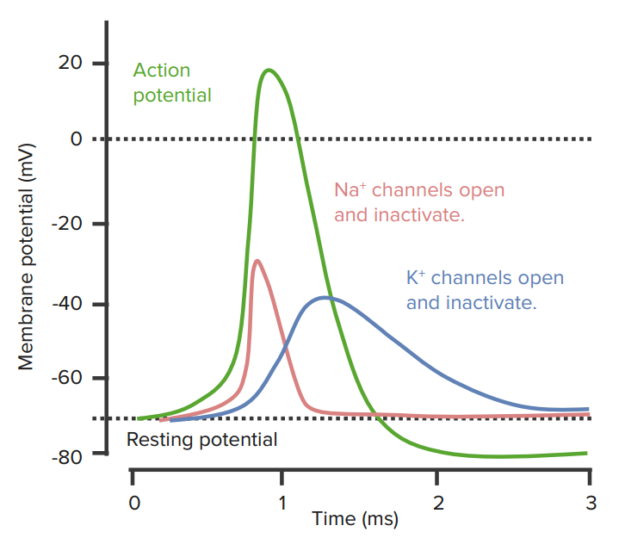 The points where the voltage-gated channels open is called the threshold.

Increasing Vm past the threshold can cause an action potential in certain tissues like nerves.

If the membrane potential becomes more negative than the resting membrane potential, it is known as hyperpolarization. During this state, a new action potential cannot be generated. Therefore, it called the refractory period or resting state, as shown in Figure 3.0.

If another stimulus arrives, the membrane will be depolarized again, and the action potential will be generated.

Effect of Current on Membrane Potential