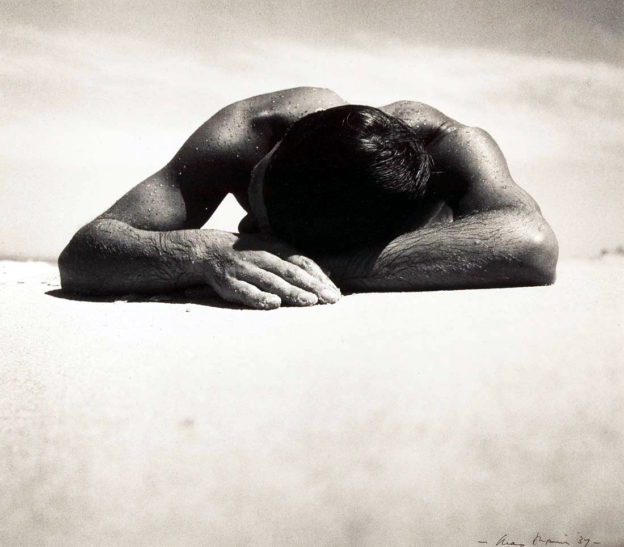 Melasma comes from the Greek word “black-spot”. It is an acquired light-dark brown hyperpigmentation that affects sun-exposed areas such as the face and the neck.

Melasma, also known as chloasma, is a relatively common acquired, symmetrical hyperpigmentation or melanosis that classically develops on the sun-exposed areas of skin and frequently on the face and neck. Melasma conventionally refers to any generalized form of facial hyperpigmentation, resulting in either from inflammation or medication use.

The disease is more common among young adults with females being affected more than males.

Women in the reproductive age are more commonly affected with a prevalence of 50 – 70%, whereas, only 20 – 25% of all cases are seen in men. It is commonly seen in the age group of 20 – 40 years, but it could start in childhood. Dark complexioned individuals (Fitzpatrick skin types III and IV), Asian and Hispanic females are more likely to develop this condition.

The exact etiology is unknown, but the nomenclature is most aptly used to describe the pigmentation associated with pregnancy. Various factors have been implicated as causative factors which include:

Sun exposure is the main factor for melasma. The risk of melasma increases with increasing sun exposure. The probable underlying cause is the over-production of melanin by melanocytes that have become hyper-functional. Ultraviolet rays from sunlight lead to the stimulation of melanocytes irrespective of the amount of sun exposure; thus, the incidence of melasma is highest in the Asian, African American and Hispanic or Latino women, especially during the summer season.

When melasma is seen in pregnant women, it is known as chloasma or mask of pregnancy. Chloasma (chloazein) is a Greek term that means ‘to be green,’ while melasma (melas) is also a Greek term meaning ‘black.’ Melasma is the preferred term as the pigmentation is brown or black, rather than green. Apart from pregnancy, exposure to exogenous estrogen and progesterone due to ingestion of either oral contraceptives or hormone replacement therapy may also cause melasma.

In the case of exogenous hormones, the combination of estrogen and progesterone has been associated with pigmentation. Estrogen replacement therapy alone, without progesterone, does not precipitate melasma.

Rare cases of idiopathic melasma have also been described in females and less commonly in males. In these cases, significantly elevated levels of the luteinizing hormone have been identified in both sexes, with an associated decrease in serum estradiol in females and serum testosterone in males. The elevated levels of luteinizing hormone, along with reduced serum estradiol, are suggestive of mild ovarian dysfunction in females.

Underlying autoimmune thyroid disorders, such as hypothyroidism, is considered as an aggravating factor in the pathogenesis of pregnancy-associated melasma.

Photosensitizing drugs and phenytoin are risk factors that are under study. 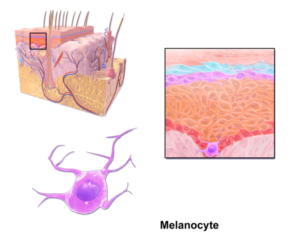 The production of melanin takes place in the melanocytes. The storage of this pigment further is in the melanosomes present within the keratinocytes. The skin color is determined by the number of melanocytes, the melanin content, as well as their location. Melanosomes also contain a copper-containing enzyme, tyrosinase. The role of this enzyme is to catalyze the conversion of L-tyrosine to L-dopa and L-dopa to L-dopa-quinone in the process of melanin synthesis.

A dysfunction in the above described pigmentary system leads to melasma, which is characterized by an irregular brownish or grayish-brown hypermelanosis of the face.

The most common theory is that in people who are predisposed to the development of melasma such as due to their skin type or genetic predisposition. Environmental influences such as sun exposure, hormone changes or medication use trigger the increased production of melanin leading to hyperpigmentation.

Most of the times exposure to sunlight is the most common cause leading to stimulation of α melanocyte-stimulating hormone, corticotrophin, and IL-1 all which increase the production of melanin. 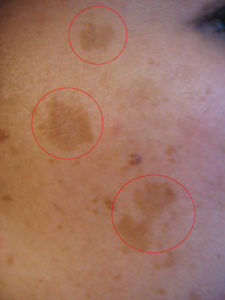 Image: “Melasma on the Face.” by Elord from Wikidocs. License: CC BY-SA 3.0

Melasma appears in adult women as bilateral, light to dark brown, blotchy cutaneous macules that are either confluent with surrounding normal skin or are punctuate. They vary in size from a few millimeters to more than 2 cm in diameter. The lesions are sharply marginated and roughly symmetrical.

Commonly affected areas are mid-face, forehead, upper lip and chin. In many cases, the entire face is also involved. Certain individuals get patches on forearms and neck; however, this is rare. In females, the lesions are spread centrofacially and over the mandibular region, while in males, lesions over the malar region are more common.

Various patterns of lesions are:

The pigmentation may remain faint or darken with time. Melasma generally has a rapid course evolving over a few weeks, and this differentiates it from other types of diffuse melanosis. Sun exposure is considered as an exacerbating factor as the lesions develop slowly with sun exposure.

The diagnosis of melasma is mainly based on clinical examination and a correlation with the history given by the patient. However, sometimes additional diagnostic aids are needed for a confirmatory diagnosis. These are:

The lesions of melasma may spontaneously resolve after parturition or soon after cessation of exogenous hormones or regulation of endogenous sex hormone levels. There is no potential for malignant transformation. Treatment of melasma is exigent due to the dermal component and a propensity for relapse.

The goals of treatment are:

These can be achieved with the fewest possible side effects by:

The following treatment options are currently used and much more are under study:

Medications are the primary line of treatment and are available in the form of creams, lotions, gels or liquids. The first line therapy which is the most efficacious consists of a triple combination topical therapy consisting of 4% hydroquinone, 0.05% tretinoin and 0.01% fluocinolone acetonide. Dual ingredient topical agents include hydroquinone combined with glycolic acid or kojic acid. Single topical agents such as 4% hydroquinone, 0.1% retinoic acid or 20% azelaic acid are alternatives for patients who are sensitive to triple combination therapy. These medicines, however, have side-effects such as skin irritation and darkening of the skin etc. in a few patients.

Various chemical peels are used as an adjunct to medicinal treatment. They comprise of tretinoin peel, obagi blue peel, as well as a glycolic acid peel. Chemical peels can lead to short-term improvement if the pigmentation is epidermal. On the application of peels, the skin initially turns red and then black. The black eschar peels off within a week. However, in some cases, post-inflammatory hyperpigmentation is a complication.

Different lasers are being used for the treatment of melasma. They are as follows:

For melasma, QS Nd:YAG (neodymium-doped yttrium aluminum garnet; Nd:Y3Al5O12) is the most commonly used laser treatment. The combination of ablative and pigment selective lasers has also been used. Ablative lasers remove the epidermis containing excess melanin which is then followed by the use of Q-switched pigment selective laser that can target the dermal melanophages. Lasers should be preferred only in cases of refractory melasma.

Individuals should avoid sun exposure as much as possible. Sun exposure is an important etiologic factor, thus avoidance of sun exposure and use of broad-spectrum sunscreen lotions containing zinc oxide or titanium dioxide are of paramount importance for effective clinical management as they provide protection from both UVA, as well as UVB.

Various sun protection accessories, such as wide-brimmed hats, must be used meticulously. Also, harsh cosmetic products and waxing of facial hair should be avoided. Use of oral contraceptives with a high estrogen content should be avoided.

Melasma has a multi-factorial etiology and thus its treatment is challenging. Proper identification of the etiologic factors helps in the development of an accurate treatment plan and lower recurrence rate. A wide range of treatment options is presently available which helps in providing treatment that is more efficacious, having lesser side effects and longer periods of remission.

More randomized controlled trials are necessary for evaluation of the efficacy of newer compounds. For maximal favorable results and prevention of relapse, ideal combination therapies must be designed and studied.