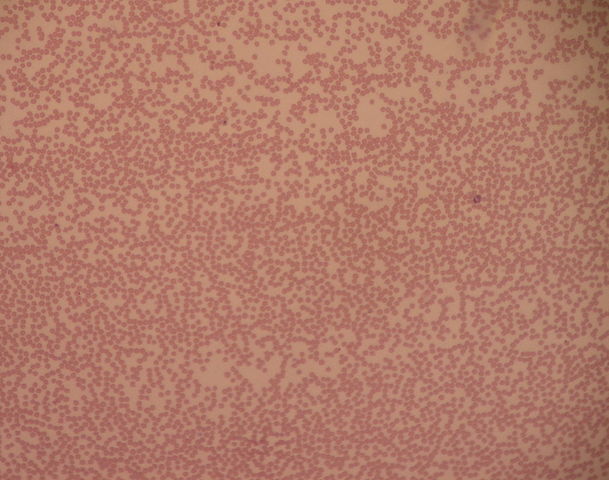 Prevention of DNA synthesis in new cells due to multiple factors may impact the growth of erythrocyte progenitor cells.

Definition of vitamin B12 Deficiency 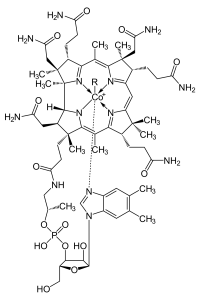 Image: Structural formula of vitamin B12. By Lecturio

Vitamin B12 deficiency results in macrocytic-hyperchromic, and megaloblastic anemia.

The most common etiological factor involves defective absorption of the vitamin. In case the abnormal absorption is caused by type A gastritis resulting from intrinsic factor deficiency, the disease is known as pernicious anemia.

Defective absorption in the area of ileum after resection, Crohn’s disease or exocrine pancreatic insufficiency can trigger megaloblastic anemia associated with vitamin B12 deficiency; however, it is not classified as pernicious anemia.

Evidence of autoimmunity alone establishes a diagnosis of pernicious anemia.

Etiology of vitamin B12 deficiency

The daily intake of vitamin B12, which is also known as cobalamin, is only around 2–3 µg. However, defective incorporation, absorption, synthesis or storage of the vitamin can lead to serious symptoms. This defect mainly occurs in areas of the body where the vitamin is essential, especially in the bone marrow.

Insufficient levels of vitamin can have negative effects on erythropoiesis. As a coenzyme mediating the metabolism of nucleic acids and lipids, vitamin B12 plays an important role in the synthesis of active folic acid. If production is disrupted due to cobalamin deficiency, it leads to defective DNA synthesis, resulting in anemia.

Causes of vitamin B12 deficiency

Vitamin B12 is mainly found in animal products such as meat, fish, milk, and eggs. Therefore, a vegetarian lifestyle that excludes intake of animal products, leads to vitamin B12 deficiency-anemia. However, not every vegetarian necessarily develops anemia.

No other vitamin is stored longer in the liver than vitamin B12, and the B12 supply can last for months, or even years. Therefore, nutritional deficiency of vitamin 12 is rarely the cause of anemia.

Gastric anacidity is one of the more common causes of vitamin B12 deficiency, when the release and binding of the vitamin with the transportation proteins is disrupted, leading to defective absorption, and anemia in chronic cases.

The transport mechanism can also be disrupted in other places. T cells can destroy parietal cells in the stomach triggered by autoimmune reactions.

Defective absorption may also occur directly in the terminal ileum, where the vitamin is reabsorbed from the intestine. Impaired intestinal absorption is primarily induced by:

In addition to the typical symptoms of anemia such as lethargy, pale skin and pale mucosa, a patient with vitamin B12 deficiency may also manifest symptoms of subclinical jaundice characterized by higher levels of serum bilirubin, following defective erythrocyte turnover in the bone marrow.

Since all cells are affected by the disruption, neutropenia and thrombocytopenia can occur at an advanced stage, resulting in thrombocytopenic purpura (hemorrhagic diathesis) and overall weakening of the immune system.

Compared with other forms of anemia, vitamin B12 deficiency can also trigger neurological disorders ranging from isolated peripheral neuropathy to subacute combined degeneration of the spinal cord.

Clinical symptoms include memory disruption, loss of concentration and sensitivity, paresthesia and reduced reflexes, and even muscular paralysis. These diseases are induced by prolonged vitamin B12 deficiency, which leads to demyelination, especially in the dorsal and lateral columns of the spinal cord.

Further clinical signs, which do not exclude other types of anemia, are:

Diagnosis and differential diagnostics of vitamin B12 deficiency

Measurement of serum levels of vitamin B12

In most cases (90%), a lower level of vitamin B12 in the serum is not reliable in establishing clinical deficiency because it can be skewed by proliferative diseases of the bone marrow, or by liver diseases. In addition, patients already manifest symptoms of anemia in the lower normal range of vitamin B12.

In these cases, the serum concentrations of methylmalonic acid and homocysteine, which are increased in vitamin B12-deficiency-anemia, should be measured.

As in most cases, a blood count can reveal the first signs of possible anemia, which normally precede the vitamin B12 levels. A lower value of hemoglobin alone, and in combination with macrocytosis and hyperchromasia, should indicate a diagnosis of vitamin B 12-deficiency anemia.

Compared with iron-deficiency anemia, all the cells are affected by vitamin B12 deficiency, characterized by lower levels of leukocytes and thrombocytes (pancytopenia).

The Schilling test uses radioactively-labeled vitamin B12 to distinguish between defective absorption and intrinsic factor deficiency.

In the case of suspected pernicious anemia, antibodies targeting the intrinsic factor as well as the gastric parietal cells should be analyzed.

Treatment of vitamin B12 deficiency 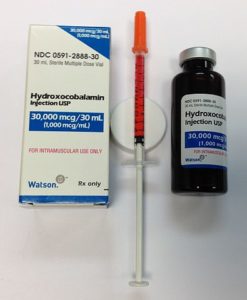 The treatment depends on the underlying disease. Additionally, vitamin B12 supplementation using a high dose of hydroxocobalamin (1,000 µg) is administered parenterally once a week. After the values reach the normal level, patients are recommended lifelong therapy with 1,000 µg every six months.

Course and prognosis of vitamin B12 deficiency

Diagnosis of the underlying disease followed by treatment via appropriate supplementation of vitamin B12 can lead to amelioration of anemia within a couple of days.

Untreated neurological symptoms induced by vitamin B12 deficiency can lead to lasting neurological damage. Because of the atrophic and aplastic changes of the mucosa, the risk of stomach carcinoma, or other carcinoid diseases is higher in patients with pernicious anemia.

Note: Type A gastritis is the most common cause of vitamin B12 deficiency. In addition to the typical symptoms of anemia, the patients also show signs of neurological disruption. Measurement of serum levels of vitamin B12 and antibodies provides path-breaking diagnosis. In addition to treatment of the underlying disease, supplementation with vitamin B12 is necessary. 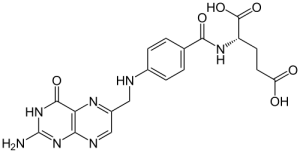 Similar to vitamin B12-deficiency anemia, folate deficiency leads to megaloblastic anemia. The most common cause is insufficient nutritional intake of folic acid. The causes include:

Biochemically, folate represents a whole group of so-called derivatives of pteridine, which are produced by plants and microorganisms. Vegetables, salads, fruits, milk, whole-grain products, and offal are good sources of folate acid. Therefore, before pharmacological intervention, substitution with cattle liver was the first choice.

As the recommended daily intake is approx. 400 µg, in patients with poor dietary folate levels, the symptoms of folate deficiency occur within a couple of weeks as the body reserves of 5 mg folate are exhausted rapidly.

In addition to nutritional deficiency of folate, other possible causes are:

Folate deficiency leads to typical symptoms of anemia. Mucosal atrophy in the larynx (dysphagia) or the gastrointestinal tract (meteorism, diarrhea) are pathognomonic for vitamin B12 deficiency anemia, as well as folate deficiency. However, the folic acid does not play a role in lipid metabolism and, therefore, does not trigger neuropathy.

Because blood parameters and findings of bone marrow also reflect vitamin B12 deficiency (macrocytosis, hyperchromasia), further testing and analysis of other factors are important to distinguish between the two types of megaloblastic anemia. Therefore, it is important to measure the levels of vitamin B12 to exclude vitamin B12 deficiency anemia. Furthermore, the folate level can be determined, which is not clinically meaningful, because it can be influenced very easily. A single meal enriched with folate can restore the levels to normal. A more reliable parameter is the concentration of folate in the erythrocytes.

Normally, the treatment of disease based on the etiological factors such as alcohol abuse and anorexia nervosa, is enough. However, depending on the severity of the disease, it is not always easy and, therefore, difficult to implement. In such cases, it is important to increase the dose of supplementation. A daily oral intake of 5 mg of folic acid is recommended for prophylaxis.

Prolonged and untreated folate deficiency can exacerbate the development of arteriosclerosis, which can increase the risk of myocardial or brain infarction.

Folate insufficiency during pregnancy can lead to neural tube defects in the child during embryonic phase. Further, osteoporosis may be worsened by folate deficiency.

Orotic aciduria is an autosomal recessive disorder characterized by the inability to convert orotic acid to uridine monophosphate  (UMP) via de novo pyrimidine synthesis because of defective UMP synthase.

Clinical manifestations include failure to thrive in children, developmental delay and resistance to treatment with B12 plus folate. No hyperammonemia is observed compared with ornithine transcarbamylase deficiency in which orotic acid is elevated with hyperammonemia.