The History of Medical Genetics | The Lecturio Online Medical Magazine 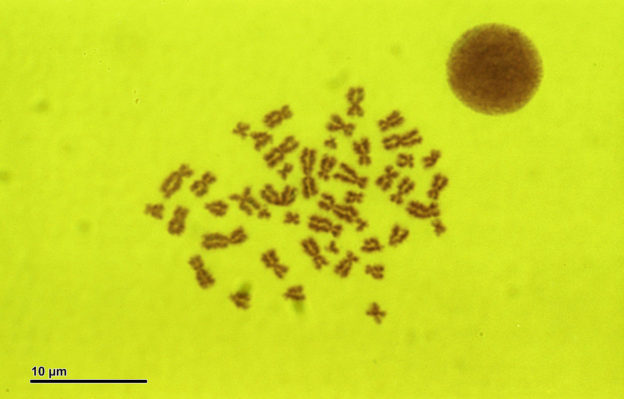 Until the 21st century, medical genetics was considered as the detection and treatment of a few phenotypic rare hereditary disorders like:

Genetic medicine is a new term for medical genetics and includes areas such as gene therapy, as well as the rapid emerging new medical specialties.

Advancement in the fields of genomics, proteomics and DNA sequencing allowed for the development of genomic medicine. This includes:

Applying the analysis of the human genome and its products to medicine, genetics and genomics go hand in hand. We now consider the following factors together:

These are single gene disorders with an atypical pattern of inheritance.

There are a large group of disorders, congenital malformations, which manifest at birth. Genetic disorders cause many of these.

Each nucleated cell in the human body has 46 chromosomes in the form of 22 homologous pairs and 1 pair of sex chromosomes that can either be XX or XY. The arrangement of these pairs on the length of upper and lower arms of the chromosomes, based on the position of the centromere, is known as a karyotype.

Chromosomal disorders can effect autosomes or sex chromosomes, and they can be a result of an alteration in the number or structure; hence,

Chromosome mutation was formerly used in a strict sense to mean a change in a chromosomal segment, involving more than one gene. Chromosome anomalies usually occur when there is an error in cell division following meiosis or mitosis.

This is called aneuploidy (an abnormal number of chromosomes) and occurs when an individual is either missing a chromosome from a pair (monosomy) or has more than two chromosomes of a pair (trisomy, tetrasomy, etc.) There is a gain or loss of one or more chromosomes, autosomal or recessive. A whole set of chromosomes can also be affected.

As the chromosomes are arranged in two sets (2n), the normal chromosomal count is 46.

All trisomies and monosomies by definition are aneuploidies.

Gain or loss of X and Y chromosomes is more common. It is compatible with life. However, any loss of autosomal chromosomes leads to abortions in the early stages of pregnancy.

The causes of trisomy and monosomy:

Types of structural abnormalities are as follows:

Known disorders in humans include Wolf-Hirschhorn syndrome, which is caused by partial deletion of the short arm of chromosome 4; and Jacobsen syndrome, also called the terminal 11q deletion disorder.

There are more than 5,000 known Mendelian disorders. They account for a total 1% of adult hospital admissions and 6-8% of all hospital pediatric admissions. These disorders represent the most common genetic abnormality. They are caused by mutation in a single gene.

Exon is the coding sequence of the genes. Some genes have many exons, and some have only a few. Some genes are large in size, while others are small. This is the reason why chromosomal deletion or duplication of some genes have minimal or no clinical presentation.

Why do some genes act in a dominant manner, while others behave in a recessive one?

Whether the action of a gene is dominant or recessive depends upon the type and function of the protein being produced by that gene, e.g. HLA and ABO blood group antigens.

Usually, the dominant genes produce the following types of proteins:

Mutation in genes producing these proteins will lead to achondroplasia, Ehlers-Danlos syndrome, etc.

Therefore, one single defected copy of a dominant gene can produce signs and symptoms related to the deficient protein. 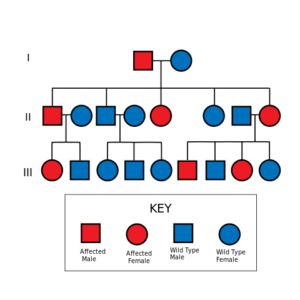 Image: “Autosomal dominant pedigree chart. In autosomal dominance, the chance of receiving and expressing a particular gene is 50% regardless of the sex of parent or child.” by Jerome Walker – Own work. License: CC BY 2.5

Sex linkage is the phenotypic expression of an allele related to the all some (sex chromosome) of the individual. The pattern of sex-link disease transfer is shown in the following figures. Gene mutations can be of the following types:

Multifactorial disorders affect many of the physiologic characteristics, such as:

These disorders have abnormalities in two or more genes of small effect, but environmental non-genetic factors are also involved. Even monozygotic twins can have different weights and heights because of environmental influences. Examples of multifactorial disorders are:

Ever-expanding database of human genetic variations and our understanding of genomics will inevitably lead to extensive discovery and development in public health and availability of tools in practice medicine.