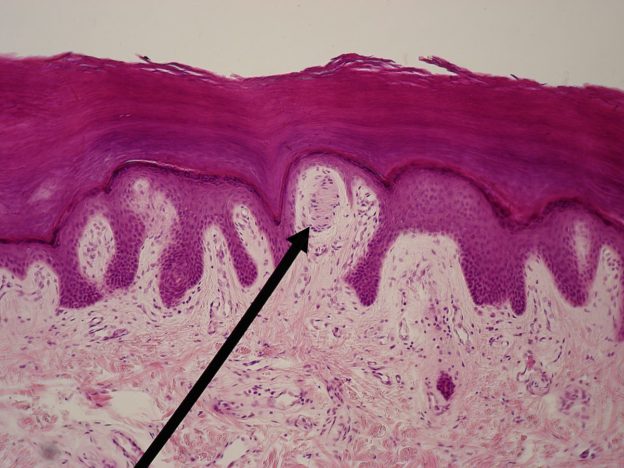 Image: “100x light micrograph of Meissner’s corpuscle (or tactile corpuscle) at the tip of a dermal papillus. As a type of mechanoreceptor it is responsible for sensitivity to light touch.” by Wbensmith – Own work. License: CC BY 3.0

A mechanoreceptor is a sensory receptor that detects the mechanical stimuli of stretch and distortion. It is also known as the tactile receptor. In human beings, four types of mechanoreceptors are present in hairless skin: Pacinian corpuscles, Meissner’s corpuscles, Merkel’s cells, and Ruffini endings. They are discussed in detail below. 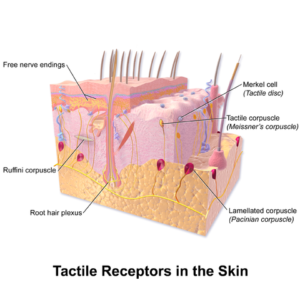 The afferents from the Pacinian corpuscle, Meissner’s corpuscle, and Ruffini ending are thought to link directly the muscle activation.

There are receptors in the hair follicle which detect a change in the hair’s position. Mechanoreceptors are also present in the hair of the cochlea, which transmits vibration signals to the brain.

Baroreceptors are a type of mechanoreceptor in large blood vessels. They detect a rise in blood pressure and send the signal to the vasomotor center in the brain. 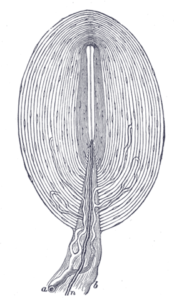 Pacinian corpuscles, also known as lamellar corpuscles, are type II fibers which detect vibration and pressure. They can detect rapid vibrations of 200-300 Hz.

They are the largest of the major types of corpuscles, measuring around 1mm in length, with an oval-cylindrical shape.  They are also the fewest in number. There is an outer capsule present, comprised of fibroblasts and fibrous connective tissue, which is mainly a type II and type IV collagen network.

They are rapidly adapting receptors with a large receptive field. Any disruption in their lamellae causes the sodium channels to open, creating an action potential. The magnitude of the disruption dictates the response. The greater the pressure change, the larger the impulse.
However, as mentioned earlier, they adapt very rapidly, and impulses are not generated after some time. Pacinian corpuscles are present in the skin and fascia. The pancreas also has these corpuscles, which detect vibration changes. 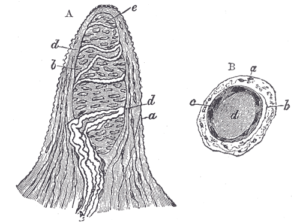 Meissner’s corpuscles, or tactile corpuscles, are type II fibers and respond to a light touch. They have the lowest threshold and are sensitive to vibrations of 10-50 Hz. The length of the corpuscle is twice its diameter. It is an encapsulated, unmyelinated nerve ending, where the cells are arranged in the form of horizontal lamellae, surrounded by a capsule of connective tissue.

Any physical deformation of the corpuscle generates an action potential; however, they are also very rapidly adapting nerve endings. These nerve endings are concentrated in the thick, hairless skin, such as the finger pads and lips. Their number declines with increasing age. 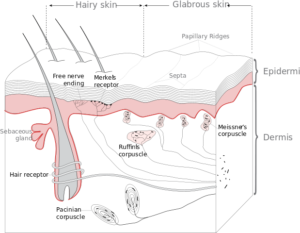 Image: “Arrangement of Mechanoreceptors in the Skin.” by Thomas.haslwanter – Own Work. License: CC BY-SA 3.0

Merkel’s disc, or Merkel’s neurite complex, refers to a group of Merkel’s cells linked to a single afferent nerve fiber. They have a small receptive field and, therefore, are capable of two-point discrimination. They are found in the basal epidermis of the glabrous, as well as the hairy skin, and are usually lost in case of skin burn.

Ruffini endings, or bulbous corpuscles, are type II fibers that detect pressure tension deep in the skin and fascia. They are slow adapting, enlarged dendritic endings with elongated capsules. They are responsible for detecting angle changes of the joints, up to 3 degrees. They also detect slippage of an object or sustained holding. They are most abundant around the fingernails.

A free nerve ending is an unspecialized, unencapsulated nerve ending, which usually carries the signal from the body’s periphery to the brain. They are frequently found in the skin, where they penetrate the dermis and end in the stratum granulosum.

They do not have any complex structure and resemble the branches or roots of a tree. Free nerve endings mostly detect pain. In addition, they may also recognize temperature, mechanical stimuli, or danger (nociception). They express polymodality. The fibers are mostly type III or type IV.