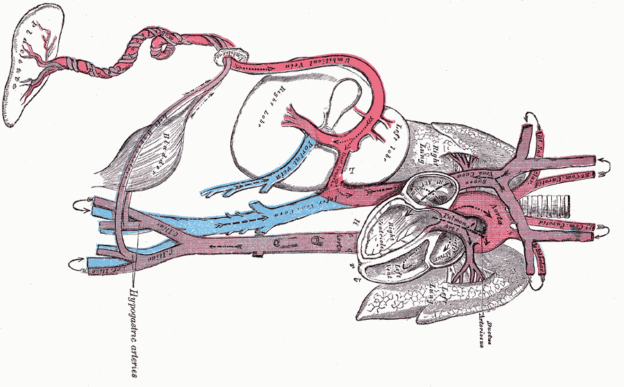 Response of Mother’s Body to Pregnancy

Once a woman conceives and becomes pregnant, several physiological changes begin to occur in her body. This is not only to provide nourishment to the developing embryo but is also an advance preparation of the parturition. The following are the major physiological maternal changes that occur during pregnancy:

The uterine size increases from 50g of non-pregnant female to about 1 kg. The vagina enlarges and the introitus opens more widely.

The breasts also become almost double in size with a 2 pounds increase in weight.

The average weight gain in pregnancy is 24 pounds; of which 7 pounds is of the fetus, 4 pounds of extra-embryonic structures, 2 pounds each of the uterus and the breasts, 6 pounds of the accumulated fluid and the remaining 3 pounds is the fat deposition in various parts of the body.

As the developing fetus removes substrates from the maternal blood, the desire for food is greatly increased. The basal metabolic rate (BMR) also increases by 15% during the later half of pregnancy. Hormones such as thyroxin, adrenocortical and sex hormones also contribute to increase in BMR.

Maternal body stores nutrients that are required by the fetus in the last trimester. The weight gain of the fetus almost doubles in the last trimester and so it requires an excessive amount of nutrients. A pregnant woman, in addition to having other nutrients, must take sufficient iron, calcium, and vitamin D. In the later stage of pregnancy, she may also require vitamin K to prevent the newborn from hemorrhage during childbirth.

Cardiac changes in pregnancy include

There is a 10-20 increase in maternal heartbeat.

Blood pressure decreases in the first and second trimester and returns to normal levels in the third trimester.

The maternal blood volume increases to 30% above normal during pregnancy. This is associated with a constant level of red blood cells hence a fall in the level of hemoglobin and hematocrit and red blood cell count. However, there is a normal level of mean corpuscular volume and mean corpuscular hemoglobin concentration. There is an associated fall in the level of thrombocytes and as such maternal pathological thrombocytopenia is below 100,000. The viscosity of blood also decreases.

Due to the above changes, pregnancy is associated with a two-three-fold increase in iron requirement for hemoglobin synthesis and fetal development. Similarly, there is a need for increased folate up to 10-20 times and two-fold increased need for vitamin B12.

Pregnancy is referred to as a hypercoagulable or pro-thrombotic state. This is thought to prevent blood loss during parturition and it begins in the first trimester all the way to 12 weeks post-partum.

The prothrombin time (PT) and activated partial thromboplastin time (APTT) decrease. There is an increase in procoagulant factors such as VIII, IX, and X. Fibrinogen levels rise by up to 50% and fibrinolytic activity is decreased.

Venous stasis in the lower limbs is associated with vasodilation and decreased flow which is more marked on the left due to compression of the left iliac vein by the left iliac artery and the ovarian artery.

There is a 20% increase in oxygen demand during pregnancy that occurs due to 15% increase in BMR. Due to increased BMR during pregnancy, minute ventilation also increases. Some of it is attributed to an increased level of progesterone, which is a direct respiratory stimulant. The PCO2 level in the blood decreases. As the growing uterus presses upon the abdominal structures, the change in the shape of the diaphragm is limited. So, to maintain adequate ventilation, the respiratory rate increases.

Renal changes in pregnancy include

The 40% fall in systemic vascular resistance also affects the kidneys leading to increased renal blood flow and thus glomerular filtration rate(GFR) increases by 50% to excrete out excessive water and salts retained in the body due to hormonal changes occurring in pregnancy. This increase in blood flow causes an increase of kidney size by 1-1.5 cm. this may be accompanied by a dilatation of the pelvicalyceal system.

Relaxin secreted from the corpus luteum and the placenta peaks in the first trimester to stimulate the formation of endothelin and vasodilatation of renal arteries.

Changes in the alimentary canal

Pregnancy is associated with an increase in nausea and vomiting that is thought to be because of the imbalance of hormones. It is also thought to be a protective mechanism against consuming any teratogenic substances. This phenomenon resolves by the 20th week of gestation in most people.

There is an increased level of all thyroid hormones thus pregnancy is considered a hyperthyroid state.

Reduction in vascular resistance activates the RAAS system causing a three-fold increase in aldosterone in the first trimester and a 10-fold rise in the third trimester.

The pituitary gland enlarges in pregnancy due to the proliferation of prolactin producing cells in the anterior lobe.

Pregnancy is a diabetogenic state associated with an increase in maternal glucose to supply the fetus and accompanying insulin resistance.

Pregnancy is associated with reversible bone loss. There is increased bone turnover to supply the fetus with calcium.

The inability of red blood cell production to keep pace with increasing plasma volume causes hematocrit to fall during pregnancy and leads to physiological anemia.

Parturition refers to the birth of the baby as a result of forceful uterine contractions. Two main effects which lead to the production of such contractions are hormonal changes and mechanical factors.

The pituitary gland of the fetus produces oxytocin, while the adrenal glands produce cortisol. Both of them are the uterine stimulants and initiate uterine contractions.

At the time of labor, the fetal membranes secrete prostaglandins, which too will stimulate the cervix and the uterus.

When the smooth muscles of the uterus are stretched, their contractile power increases. The movements of the fetus cause intermittent stretch of the uterine wall. In a twin pregnancy, the average time of delivery is 19 days earlier than in a single pregnancy. This emphasizes the importance of mechanical forces produced by the fetus.

The weak and rhythmical contractions of the uterus that occur throughout the pregnancy are called Braxton-Hicks contractions. However, at the end of pregnancy, these uterine contractions become stronger in amplitude and frequency and result in the dilatation of the cervix, which forces the baby out of the birth canal.

This process is known as labor. The normal duration of labor in a primary gravida is up to 24 hours and, when exceeded, the woman is said to be in an obstructed labor which requires urgent intervention. With multiple pregnancies, the duration of labor significantly reduces.
The process of labor has been explained on the basis of a positive feedback mechanism.

As the fetal head descends down into the pelvis, it stretches the cervix. This stretch response causes uterine contractions. These uterine contractions begin from the fundus of the uterus above and then propagate downwards, causing a further stretch of the cervical wall. This re-sends the signals to the uterus to produce another forceful contraction, stronger than the previous one. The cervix is stretched and dilated because of this vicious circle and finally, the baby comes out of the birth canal.

Another important event occurring during this process of cervical stretching is the signal transmission from the cervix to the hypothalamus, which results in the production of oxytocin hormone. This oxytocin hormone causes a stronger uterine contraction than the previous one, so every succeeding uterine contraction is stronger than the preceding one.

In the early part of labor, the frequency of uterine contractions is low, occurring after every 30 minutes, but, as the labor progresses, these contractions become stronger and may recur after every 5 minutes. These intermittent, rhythmic contractions of the uterus are of utmost importance as they prevent the blockage of blood flow to the fetus which may result in fetal death. Abusive use of oxytocin may cause uterine spasm resulting in fetal death. 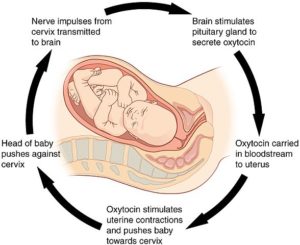 The process of labor is divided into three stages:

During fetal life, the lungs are non-functional. Therefore, the fetus does not have the ability to oxygenate its blood. It gets the oxygen and other nutrients directly from the mother via placental circulation. The fetal circulatory system is therefore different from an adult circulatory system. There are several bypass mechanisms discussed below: 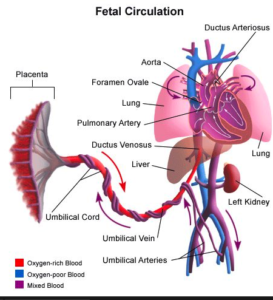 Oxygenated blood and other nutrients travel through the placenta into the umbilical vein. The exchange of gasses occurs at this level.

Ductus venosus shunts the oxygenated blood away from the liver into the inferior vena cava.

The blood then enters the right atrium through the inferior vena cava.

Some of the blood goes directly to the left atrium via foramen ovale, which is a window-like opening between the two atria.

The remaining blood, which enters the pulmonary artery, re-enters the aorta through a connection between the two called ductus arteriosus. It shunts blood away from the lungs.

Mixed blood after supplying the head and the body travels back to the placenta via umbilical arteries. It then enters the maternal circulation.

The first cry of the baby lets the airflow into the lungs. As a result, they expand and the blood starts flowing in the pulmonary arteries. The increase in pressure in the right side of the heart, and in the pulmonary artery, causes the closure of foramen ovale and ductus arteriosus. Prostaglandins inhibition also plays an important role in their closure. 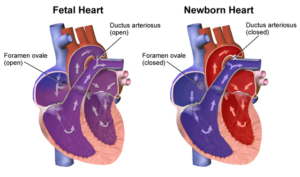 Image: “Changes occurring after the birth in a newborn heart.” by BruceBlaus – Own work. License: CC BY-SA 4.0

The oxygenated blood leaves the lungs and enters the left atrium via pulmonary veins. It then flows into the left ventricle and is then pumped into the aorta and to all parts of the body. This is called systemic circulation.

Comparison of fetal and adult circulation

In fetal circulation, the exchange of gasses occurs at placental level, while in an adult circulation, it occurs in the lungs.

In fetal circulation, the lungs are bypassed by the foramen ovale and ductus arteriosus. In an adult, there are two circuits of blood.

1. A young pregnant lady, in the 3rd gestational month, came for a follow-up observation ultrasound to the gynecologist. She has HR 116/min, RR 28/min and a temperature of 99F. Which of the following would decrease during her pregnancy?

2. A 9-month pregnant female came with a complaint of cramping pain in the abdomen since morning. The pain is now worse and bleeding has started. She has been examined by the duty doctor in the labor room and the head of the baby was seen on per vaginal examination. Which stage of labor is she in?