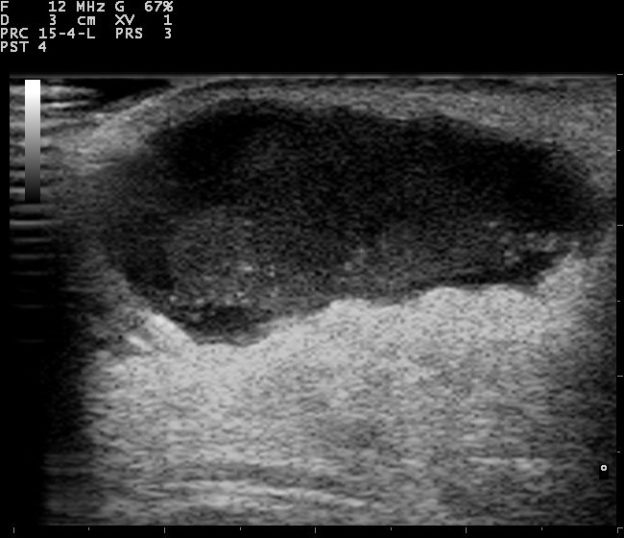 Lactational mastitis is most common in the first six weeks of lactation. It is usually due to milk stasis or breast engorgement with an incidence of up to 10% of breastfeeding mothers.

Breast engorgement is the main offending agent in lactational breast inflammation. This could result from infrequent breastfeeding, maternal or child illness, rapid weaning or blockage of milk ducts.

The gross picture of the breast will show signs of inflammation: redness, swelling and tenderness. When an abscess is formed, edematous cavitary mass filled with pus will be seen. Microscopically, the breast will show inflammatory cellular infiltration with the microorganisms in special stains.

General constitutional symptoms of high fever, chills, fatigue, malaise, and myalgia will be present. Locally, the breast will be swollen, tender and firm, while the overlying skin will be erythematous. Regional lymph nodes may be enlarged and tender.

It is important to initiate the treatment early based on the clinical presentation to avoid the formation of breast abscess. Gram stain and culture of the milk will give conclusive results about the causative organisms which will be unnecessary in most cases unless the infection is severe or recurrent. Ultrasound is used mainly to exclude abscess formation requiring aspiration. 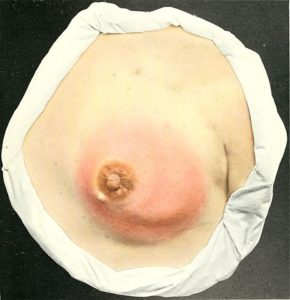 Inflammatory breast cancer should be suspected in any case of mastitis that does not respond to proper treatment. It has the same signs of inflammation – tenderness and enlarged breast – but with malignant features: skin thickening, peau d’orange and axillary lymphadenopathy.

A biopsy is diagnostic. It is an aggressive tumor with lymph node involvement and sometimes distant metastases at the time of presentation. Invasion of lymphatic vessels is responsible for the clinical picture that resembles inflammation.

The pus collection in the breast tissue follows mastitis or cellulitis. The incidence of breast abscess is 3% among women with antibiotic-treated mastitis. It is more common in non-lactational mastitis.

Risk factors include older maternal age, firstborn child, prolonged gestational age more than 41 weeks, and smoking. Breast abscess can sometimes be secondary to another disease e.g. diabetes, steroids, trauma, and rheumatoid arthritis. It has the same clinical picture of mastitis but with tender localized fluctuant mass. The US is the diagnostic modality of choice.

Management of breast abscess is always drainage with antibiotic coverage. The US assisted needle aspiration, or surgical evacuation can be used.

Complications of a breast abscess include recurrence, milk fistula, and antibioma, which results from repeated antibiotic treatment for an abscess leading to hard mass with sterile pus.

It is usually bilateral and sometimes with pain, but no signs of inflammation or systemic symptoms.

This is due to obstruction of a mammary duct with the formation of a cystic mass. There is no pain or tenderness. Diagnosis is made by aspiration of milky fluid from the cyst.

Continuation of breastfeeding with the emptying of the breast either with pumping or hand expression is mandatory for symptoms relief and rapid cure. Anti-inflammatory medications should be initiated to help with the pain and constitutional symptoms.

Antibiotic treatment, according to culture and sensitivity results, should cover staphylococci. Blood cultures can be withdrawn for patients with hemodynamic instability or severe infection. Failure to respond to medical treatment within 48 hours of therapy necessitates abscess exclusion with the US.

Recurrent infection, or infection that does not respond to medical treatment, should raise the suspicion for inflammatory breast carcinoma, which should be excluded with biopsy.

In severe infection or hemodynamically unstable patients, vancomycin should be initiated empirically then according to culture results. The duration of therapy should last for 10-14 days.

Oral Lactobacillus salivarius PS2, which is a lactobacillus probiotic, can be given to pregnant women with a previous history of lactational mastitis in late pregnancy to reduce the risk of infection after delivery.

Non-lactational mastitis is the inflammation of the breast tissue that is not related to lactation. It includes idiopathic granulomatous mastitis and periductal mastitis.

Periductal mastitis is idiopathic inflammation of subareolar breast ducts that have been associated with smoking, thus it can be found both in men and women. Cotinine, which is a nicotine derivative, has been implicated in the pathogenesis with necrosis and inflammation of the breast ducts. The most common organisms isolated are staphylococci, enterococci, bacteroides, and anaerobic streptococci.

The clinical picture is similar to lactational mastitis with inflammation and infection that may progress to abscess formation and sometimes a draining fistula to the skin surface.
Zuska’s disease is a subareolar abscess due to obstruction of mammary ducts with epithelial metaplasia. It has the same clinical picture with signs of inflammation and can mimic malignancy, especially in non-lactating women. Areolar sinus with milk drainage is characteristic.

Differential diagnosis includes duct ectasia, which can lead to duct distension with creamy nipple discharge. It is more common in older women. It is benign and age-related with no inflammation or infection.

Smoking cessation is the first step in management. Periductal mastitis can be managed with antibiotics according to culture and sensitivity results. Amoxicillin-clavulanate is commonly used or clindamycin as an alternative.

Abscess formation or fistula should be treated surgically with drainage and duct excision to avoid recurrence. Drainage of the abscess only without excision of the necrotic duct is associated with a high rate of abscess recurrence and fistula formation.

Peripheral multicentric inflammation of the breast of unknown etiology is characterized by small peripheral abscesses, peau d’orange of the overlying skin, sinus formation and axillary lymphadenopathy.

It can resemble malignancy, especially when mammography and US show a solid mass and core biopsy is necessary for the diagnosis. A biopsy of the mass will show granulomatous inflammation but negative for acid-fast bacilli, fungi and sarcoidosis. The inflammation is self-limiting and can take up to 12 months. Antibiotics are indicated in case of abscess formation, while steroids and surgical excision are not recommended.