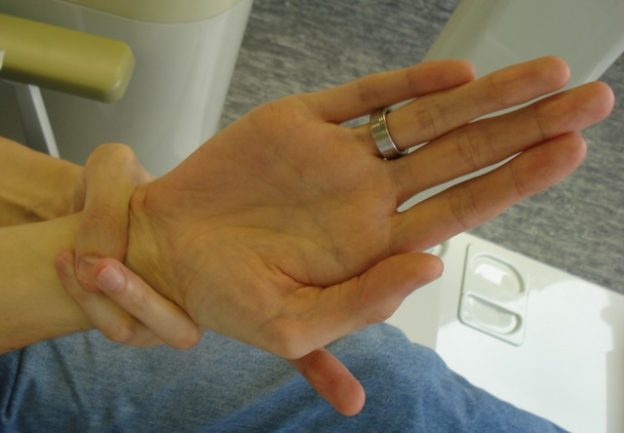 Image: “A positive wrist sign in a patient with Marfan syndrome. In case of a positive wrist sign the thumb and little finger overlap, when grasping the wrist of the opposite hand.” by Staufenbiel I, Hauschild C, Kahl-Nieke B, Vahle-Hinz E, von Kodolitsch Y, Berner M, Bauss O, Geurtsen W, Rahman A – http://www.ncbi.nlm.nih.gov/pubmed/24165013. Licence: CC BY-SA 2.0

Marfan syndrome (MFS) was 1st described in 1896 by Antoine Marfan, a pediatrician in Paris. Unlike many other diseases, there is an equal distribution between the genders and prevalence in all parts of the world. MFS is inherited in an autosomal dominant pattern or caused by spontaneous mutation and is about as frequent as mucoviscidosis.

The mutation is located on chromosome 15q21, Marfan locus. This long arm of chromosome 15 includes the gene encoding for fibrillin-1. This leads to a disturbing synthesis of microfibrils and thus elastic fibers.

Marfan syndrome is an autosomal dominant disorder of the connective tissue. It affects multiple systems including the cardiovascular system, the skeletal system and the eyes. It occurs in 1/5,000 live births.

Image: Lens dislocation in Marfan syndrome with the lens being kidney-shaped and resting against the ciliary body. By National Eye Institute, License: Public domain

The degree of the manifestations varies to a high extent. The main cause of death, aortic dissection, is, however, often not detected. Typical manifestations of neonatal MFS are, in addition to those mentioned above, dolichocephaly, malar hypoplasia, enophthalmos, retrognathia, and an impaired range of motion of the peripheral joints.

Sixty percent of the patients who have Marfan syndrome are known to have dural ectasia.

Ghent’s nosology was introduced in 1996 and has made the diagnosis of MFS easier worldwide by compiling all diagnostic criteria. If the family history is negative, 3 major criteria in 2 different body systems must be present and a 3rd system has to be involved. It was revised in 2010. Seven new criteria lead to a diagnosis.

In the absence of a family history of MFS:

In the presence of a family history of MFS:

Systemic participation is considered when 7 or more points are reached.

Patients can only be treated individually for symptomatic management, but the most important part is to have regular appointments with ophthalmologists, cardiologists, and orthopedic specialist. It is crucial to monitor the aortic root diameter which is assessed by an echocardiograph. Prospective and retrospective trials have shown that propanol and atenolol can slow down aortic dilatation, resulting in increased usage of beta-blockers. This also helps prevent cardiac surgery.

Life expectancy for patients with MFS has increased in the past few years. This is mainly attributed to cardiac surgery to prevent rupture and dissection of the aorta.

The vital factors in the management of MFS are:

During pregnancy – Aortic dissection or rupture may occur when the aortic diameter becomes abnormal. A multidisciplinary approach is recommended.

Pulmonary – Pneumothorax may occur. Lung expansion may be restricted due to pectus excavatum or scoliosis. MFS increases the risk of sleep apnea.

Orthodontic – Maxillary narrowing resulting in the high-vaulted palate and mandibular retrognathia resulting in malocclusion is the most common feature.