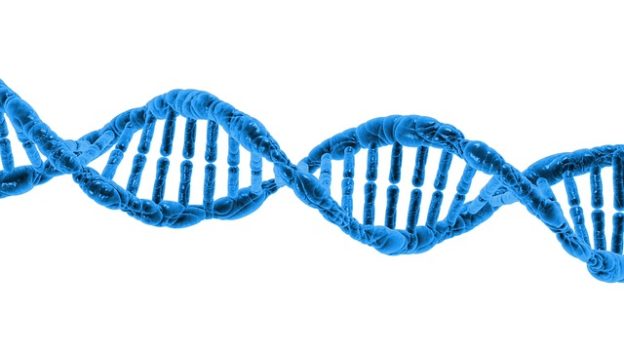 Physical mapping allows us to find the actual physical location of each gene on the chromosome—all the way down to such a granular level we know precisely at what letter a gene begins.

Restriction mapping provides physical maps of DNA fragments. The process is performed in the following steps:

In order to create genetic maps, it is necessary to use labeling and tags, so the result might resemble these cytological maps. The chromosome has been broken down into sections, which show the physical locations of the genes. Cytological maps use staining in order to mark places on the genome, thus allowing for a whole view of each chromosome and therefore, the entire genome. 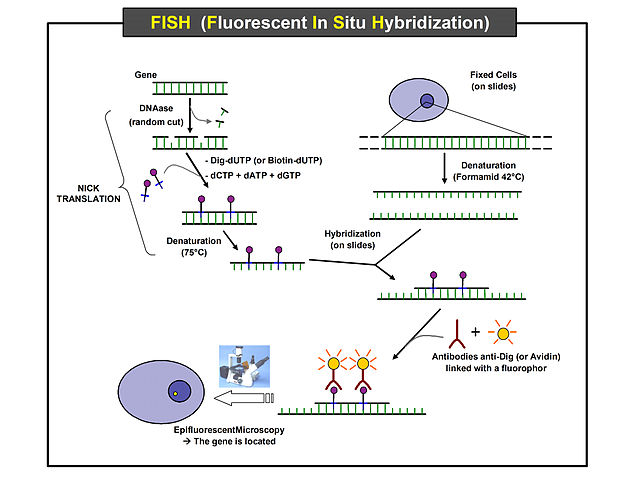 Image: “Scheme of the principle of the FISH (Fluorescent in-situ hybridization) experiment to localize a gene in the nucleus.” by Mr. Matze. License: CC BY-SA 3.0

FISH is one of the staining techniques used to mark chromosomes with fluorescent dyes and see if they contain particular genes. The primary purpose of the cytological maps is to characterize chromosomal abnormalities.

STSs can provide a sort of scaffolding that shows how the pieces in the genome go together. This helps to investigate locations of known DNA sequences on a chromosome. STSs comprise of 200 to 500 base pair sequences that have a single occurrence. DNA fragments from DNA libraries are cut with restriction enzymes and run on the gel, with electrophoresis separating the resulting pieces by size. Each clone provides different pieces of DNA, which can be aligned because of the STSs.

In order to identify these STSs, polymerase chain reaction (PCR) is used with probes; the probes will attach when the DNA separates, then they can be located by using visualization techniques.

The Ultimate Physical Map: The Sequencing of the Entire Genome

The ultimate physical map represents the exact DNA sequence on a chromosome. We can say exactly where a gene is located on a chromosome by using DNA sequencing. Vectors containing cloned DNA from libraries can be used to sequence a genome. 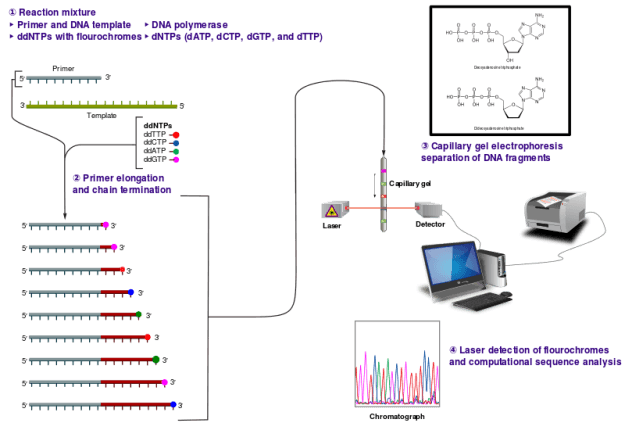 Image: “The Sanger (chain-termination) method for DNA sequencing. (1) A primer is annealed to a sequence, (2) Reagents are added to the primer and template, including DNA polymerase, dNTPs and a small amount of all four dideoxynucleotides (ddNTPs) labeled with fluorophores. During primer elongation, the random insertion of a ddNTP instead of a dNTP terminates synthesis of the chain because DNA polymerase cannot react with the missing hydroxyl. This produces all possible lengths of chains. (3) The products are separated on a single lane capillary gel, where the resulting bands are read by an imaging system. (4) This produces several hundred thousand nucleotides a day, data which requires storage and subsequent computational analysis” by Estevezj. License: CC BY-SA 3.0

Dideoxynucleotides are a critical component. 3′ OH is needed for DNA polymerase to add new nucleotides. 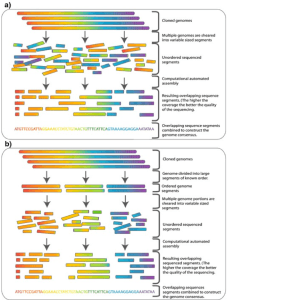 Image: “In whole genome shotgun sequencing (top), the entire genome is sheared randomly into small fragments (appropriately sized for sequencing) and then reassembled. In hierarchical shotgun sequencing (bottom), the genome is first broken into larger segments. After the order of these segments is deduced, they are further sheared into fragments, appropriately sized for sequencing.” by Commins, J., Toft, C., Fares, M. A. License: CC BY-SA 2.5

It’s also known as whole-genome shotgun sequencing and is only possible because of the higher levels of computing that are possible these days.

Rather than doing BAC to BAC, we just hack up the entire genome into millions of little pieces. Previously, this method consumed a lot of computer resources, but nowadays, with the advantage of powerful