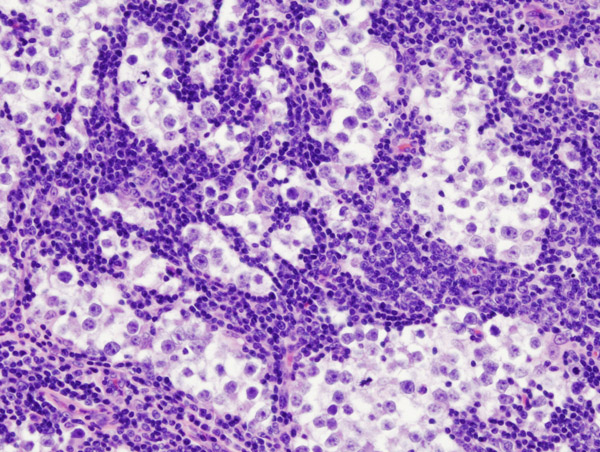 The main difference between benign and malignant neoplasms lies in the ability of malignant neoplasms to metastasize to distant organs or invade adjacent structures. This metastatic phenomenon is responsible for most of the cancer-related mortality and a deeper understanding of its mechanisms can help in developing more specific treatments for malignant neoplasms.

Two important abnormalities are responsible for this malignant behavior; the first is related to cell-cell adhesion, while the latter is about cell-matrix adhesion. 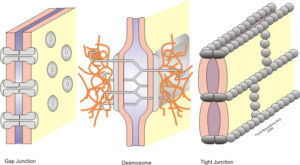 Different forms of cell-cell adhesion complexes exist especially in the epithelial cell line to ensure optimal function. These include tight junctions, adherens junctions, gap junctions, and desmosomes. For tumor cells to be able to metastasize, they should get loose from their micro-environment, and dysfunction of these different adhesion complexes is responsible for that.

Up-regulation or down-regulation of tight junctions (TJ) has been reported in different forms of epithelial cancers, such as colorectal cancer, pancreatic cancer, and breast cancer and is believed to be responsible for cancer invasiveness and metastasis properties. Tight junctions are usually down-regulated, but, even if they are up-regulated, they are believed to be malfunctioning and to result in loss of cell–to–cell adhesion.

Adherens junctions (AJ) are found in the basal side of the epithelium and are of the cadherin family of proteins. In order for the malignant cells to be able to metastasize, they should lose adhesion to the basal membrane and to the cellular matrix, which can be explained in several forms by a loss of cadherin that would eventually lead to decreased cell-to-cell and cell-to-matrix adhesion.

Gap junctions are responsible for the free movement of cell-to-cell small molecules and electrolytes. These junctions are important in signal transduction from one cell to the other, and an abnormality would result in impaired synchrony between the different cells.
Connexin is a protein that is found in gap junctions and its loss has been described in several forms of cancer such as colorectal cancer. Connexin loss in colorectal cancer has been associated with an increased risk of recurrence and a decreased survival rate due to metastatic disease.

Integrins are a group of proteins responsible for cellular adhesion and interaction with the extracellular matrix and have been found to be impaired in different forms of cancer such as colorectal carcinoma, lung cancer, and laryngeal cancer.
The role of integrins in malignancy is more difficult to appreciate as they are found to be decreased or increased in different stages of the disease, but they are clearly related to the metastatic properties of malignant neoplasms. 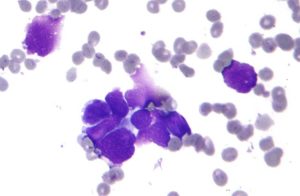 Selectins are another group of adhesion molecules that are related to the cellular interaction with pro-inflammatory molecules, leukocytes, and vascular endothelium. One of the most common examples of early-stage metastatic cancers is small cell lung cancer, which carries a very high mortality risk.
Small cell lung cancer cells are believed to metastasize by adhering to selectins in activated endothelium and to gain access to the bloodstream.

Integrins, as we explained, also play an important role in the interaction between the epithelium and the extracellular matrix. Cell adhesion molecules include cadherin, integrins, and selectins and they have been found to strictly control cellular differentiation and migration properties. In several forms of malignancies, cellular differentiation and migration are impaired due to an abnormal expression of cell adhesion molecules.

CD44 is another cell adhesion molecule that has a close role in the regulation of microRNA. CD44 is over-expressed in cancer cells and is believed to be responsible for tumor invasion, the metastatic behavior of malignant neoplasms and resistance to apoptosis. CD44 is currently being studied as a possible therapeutic target in colon cancer.

The several types of adhesion molecules described here can be used in cancer prognosis and diagnosis. For instance, claudin-7, a tight junction protein, has been found to be highly correlated with invasive ductal carcinoma of the breast. A decreased level of claudin-7 has also been found to be associated with a more severe form of prostatic cancer.

Another tight junction protein, claudin-1, has been found to be an effective therapeutic target for metastatic lung adenocarcinoma.

In order for malignant neoplasms to behave aggressively and metastasize, the tumor cells have to become motile. While cellular motility is normal in certain processes, such as inflammation and wound healing, it plays an important role in metastatic processes.

For tumor cells to become motile, they should have altered cellular adhesive properties as we previously explained, but also need to differentiate and transform into a mesenchymal cell and lose its epithelial properties.

For epithelial tumor cells to transform into mesenchymal cells, they first need to lose cell–to–cell adhesion. This is usually followed by an expression of altered cell surface proteins, degradation of the extracellular matrix and morphological changes of the tumor cells.
The most important adhesive molecule to be lost in order for the tumor cells to become mesenchymal is E-cadherin. E-cadherin is usually substituted with N-cadherin, which is responsible for the metastatic and invasive behavior of malignant neoplasms. In specific tumors such as meningiomas, E-cadherin is over-expressed.

At this stage, it should be evident that malignant neoplasms in order for them to metastasize or invade the lymphatic system or distant organs, they should have access to the blood and lymphatic streams. This is achieved by two processes known as angiogenesis and lymphangiogenesis.

Angiogenesis in malignant neoplasms is the result of the expression of several molecules that are pro-angiogenic. One common example is the over-expression of vascular endothelial growth factors that are responsible for the induction of the formation of new blood vessels.
Lymphangiogenesis is defined as the formation of new lymphatic vessels inside the tumor and is believed to play a key role in the lymphatic spread of malignant neoplasms.

Vascular endothelial growth factors are believed to be one of the most important regulators of angiogenesis and have been the target of different therapeutic anti-cancers with variable success. Additionally, endovascular occlusion of these vessels is essential in controlling the size of the tumor, and can sometimes render a non-operable tumor into an operable one.

The most commonly involved organs in metastatic disease are the lungs, liver, brain, and bone. Malignant melanomas metastasize to the lungs in up to 90% of the cases.