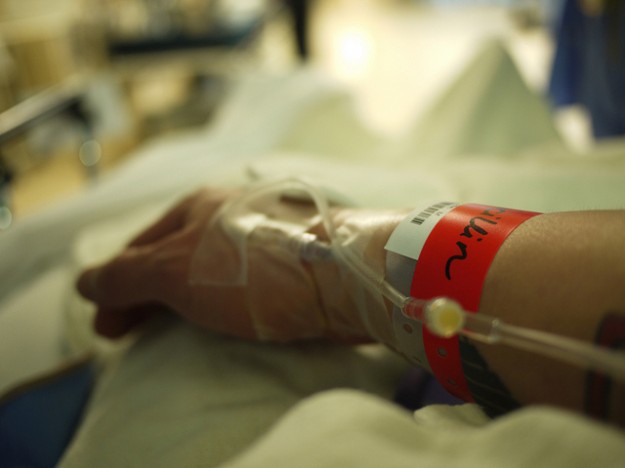 Malignant hyperthermia is one of the most dreaded complications in general anesthesia. Certain anesthetics can trigger it and, if not treated, is lethal in 70–80% of cases. In most cases, it develops during narcosis. However, it might also occur in the postoperative period.

The cause of malignant hyperthermia is a genetic defect in the calcium metabolism of the skeletal muscle cells. It is assumed that there is a mutation in the gene that codes for the intracellular ryanodine receptor. This receptor releases calcium out of the sarcoplasmic reticulum of the muscle cell, which eventually leads to muscle contraction.

In the case of malignant hyperthermia, a ryanodine receptor defect leads to continuous muscle contraction. The reabsorption of calcium into the sarcoplasmic reticulum and the relaxation phase associated with it fail to occur.

The consequence is an increased cellular metabolism (hypermetabolism) with a subsequent massive increase in CO2, tissue hypoxia, increased warmth production, and lactic acidosis. If not treated, cellular decay occurs with an increase in creatine kinase (CK) and myoglobinuria.

These Anesthetics Require Careful Use

Substances that may trigger malignant hyperthermia include inhalational anesthetics (halothane, enflurane, isoflurane, etc.) and the muscle relaxant, succinylcholine. Stress may also be a trigger. Furthermore, ketamine and amide-type local anesthetics are discussed as the possible substances of abuse.

The following are considered ‘safe anesthetics’ for patients with previously diagnosed malignant hyperthermia:

The most frequent early signs of malignant hyperthermia include tachycardic cardiac dysrhythmia in almost 90% of the cases. Unfortunately, this is very unspecific and is often misinterpreted as a very low depth of anesthesia.

A more specific early symptom is hypercapnia. Within a few minutes, the partial pressure of carbon dioxide can rise to three- or fourfold. Indirectly, this becomes apparent through the warming of the CO2 absorber. Direct indicator is capnometry, which is part of standard monitoring in surgery and the intensive care unit. Also, muscular rigor, acidosis, and hyperkalemia are early signs.

Masseter muscle spasms and rigor of the remaining muscles are specific for succinylcholine-induced malignant hyperthermia.

Masseter muscle spasms at the beginning of anesthesia induction are always suspicious and should lead to the termination of the anesthesia administration and the initiation of further diagnostics and therapy. As a late sign, the creatine kinase concentration and body temperature rapidly rise (up to 1.0°C in 5 min). Initially, blood pressure often elevates, and, eventually, it decreases as a sign of circulatory failure.

Immediate action with initial suspicion of malignant hyperthermia includes removing the substance of abuse, terminating surgery as soon as possible, and, if necessary, changing to safer anesthetics (see above).

Ventilation should be changed to hyperventilation with 100% oxygen and three- to fourfold increased respiratory minute volume. Dantrolene, a muscle relaxant that inhibits the release of calcium in the sarcoplasmic reticulum, is administered intravenously to terminate the continuous muscular contraction.

Symptomatic measures include the balance of the acidosis with sodium bicarbonate, the cooling of the patient, volume loading, and electrolyte balance. If myoglobinuria or high level of serum myoglobin occurs, forced diuresis will reduce the complication of a crush kidney. Unless clearly contraindicated, tachycardia may be treated with the administration of beta-blockers.

The test should be performed after an incident during narcosis or postoperatively if relatives are affected by malignant hyperthermia (family history in preoperative discussion).

If malignant hyperthermia is detected, the patient should be informed about the existing risk of narcosis, and an allergy should be noted in the chart along with clear annotation of the allergy to minimize future risk.