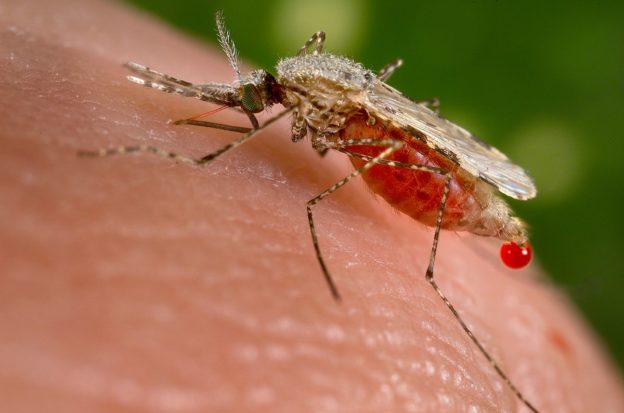 Definition of Malarial Disease in Children

Malaria is a disease that is caused by a parasite known as plasmodium, which is predominant in Africa. The most fatal species of plasmodium is known as P. falciparum. The malarial disease is an intermittent fever that is caused by plasmodium protozoa which invade the red blood cells and are obligate intracellular organisms.

Epidemiology of Malaria in Children

The mode of transmission of the protozoan responsible for malaria is via the bite of the infected female mosquito of the anopheline species. Approximately 3 billion people in the world are at risk of acquiring malaria due to living in one of the endemic 108 countries.

Plasmodium falciparum is responsible for approximately 243 million cases worldwide and was implicated in at least 860,000 deaths per year. Up to 80% of the cases are young children who are less than 5 years of age.

Approximately 2.4 billion of the world population are at risk of acquiring Plasmodium falciparum due to being in exposure to the parasite. Unfortunately, the protozoan is responsible for a significant number of cases in areas where medical facilities are limited and the risk of long-term complications is usually high. 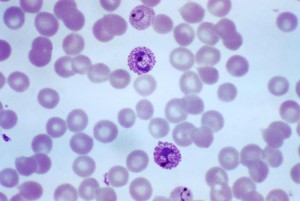 Plasmodium vivax is responsible for a milder form of the disease that is less commonly associated with high fatality compared to P. falciparum. P. vivax malaria is more common in South Asia and Latin America.

As part of studying the epidemiology of malaria, it is also important to understand some important definitions such as malaria control, malaria elimination and malaria eradication.

Malaria control is defined as the process to lower the burden of the disease on the health-care system to an extent where it is no longer a public health problem. This is achieved by malaria elimination, which is defined as the destruction of the mosquito responsible for the transmission of the parasite in a given geographical area.

The goal of current international efforts in malaria control and elimination is to eventually achieve malaria eradication where the worldwide incidence of malaria would drop down to zero permanently.

Pathophysiology of Malaria in Children 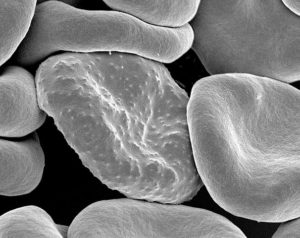 The parasite responsible for malaria, Plasmodium, is transmitted by mosquitoes. Once someone gets bitten by a mosquito that carries the protozoan, the protozoan gets access to the bloodstream.

Plasmodium falciparum, while it proliferates in the liver, is known to reach maturity inside red blood cells. These infected red blood cells are known to sequester in certain tissues and organs, causing microvascular disease. This mechanism is thought to be responsible for the high fatality rate seen with P. falciparum.

Red blood cells infected with P. falciparum express certain surface molecules that interact with the surface of the vascular endothelium and cause the sequestration of the affected red blood cells. The formation of thrombi can be excessive in the cerebral circulation in patients infected with P. falciparum, which explains the neurological symptoms of the disease and the fatality of the condition.

Clinical Presentation of Malaria in Children

Children usually present with fever, vomiting, headache and anorexia. Rigors are more common with P. vivax. At first, the condition can be mistaken for gastroenteritis. Patients can also develop shortness of breath, cough, and tachypnea. 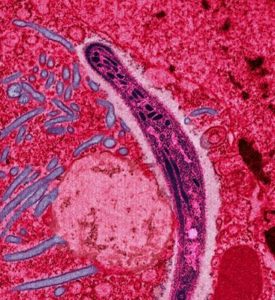 Image: “Malarial sporozoites develop inside oocysts and are released in large numbers into the hemocoel of Anopheles stephensi mosquitoes.” by image by Ute Frevert; false color by Margaret Shear – http://biology.plosjournals.org/perlserv/?request=get-toc&issn=1545-7885&volume=3&issue=6. License: CC BY 2.5

Patients with severe malaria disease are more likely to have a previous medical history of human immunodeficiency virus infection, impaired immune response, or malnutrition. Additionally, this group of patients is more likely to come from areas that are known to have endemics of P. falciparum, such as sub-Saharan Africa.

Patients with severe cerebral malaria usually develop unarousable coma. At this stage, the presence of blood parasitemia with the confirmation of the presence of the parasite P. falciparum has already been made.

Diagnostic Workup for Malaria in Children

Patients who live in areas known to be an epidemic with malaria should receive adequate antimalarial therapy without laboratory confirmation of the diagnosis. While this approach might sound more likely to save lives, it has also resulted in an increase in the incidence of malaria strains that are resistant to classical antimalarial drugs.

Microscopic confirmation of the protozoan is possible and is usually considered as the gold standard. Microscopy confirmation of the diagnosis is more commonly performed in South Asia and Latin America but is rarely used in Africa due to the unavailability of the required equipment or reagents.

Rapid diagnostic tests that are based on simple immunochromatographic tests are also available, especially in limited-resources countries.

Recently, the development of DNA amplification techniques for the detection of Plasmodium parasites without needing specialized equipment has been ongoing. The availability of these tests, especially in countries where microscopy is not available, will prove to be very useful in the confirmation of the diagnosis. These DNA detection tests can confirm the diagnosis even when parasitemia is minimum.

Treatment of Malaria in Children

The treatment of malaria in children should be tailored against the severity of the condition; therefore, we will discuss the treatment of uncomplicated malaria and severe malaria separately.

The treatment of uncomplicated malaria

The treatment of uncomplicated malaria consists of the administration of artemisinin, such as artesunate, artemether or dihydroartemisinin. These antimalarials are superior to chloroquine, sulfadoxine-pyrimethamine, and quinine. The typical treatment duration for uncomplicated malaria is one week, but this can be shortened to three days by the combination of artemisinin with another antimalarial drug. For instance, artesunate can be combined with mefloquine or amodiaquine.

Patients with confirmed P. ovale or P. vivax also might benefit from chloroquine and primaquine use because these drugs have an effect against the hypozoites stage of the parasite when they reside within the liver. Children confirmed to have P. ovale or P. vivax strain that is resistant to chloroquine, might show a good response to dihydroartemisinin combined with piperaquine.

Children with severe malaria who are in a coma or who develop severe cerebral malaria can lose their life within a few hours. Coma in cerebral malaria probably results from parasite sequestration, inflammation, and endothelial dysfunction. Therefore, the administration of artesunate is recommended as soon as possible. Intravenous artesunate is administered as 2.4 mg per kilogram of body weight as stat dose, then the second dose after 12 hours and then two doses 12 hours apart. Artesunate and other antimalarial drugs are usually administered intravenously in patients with severe malaria, but if access to a health-care provider will take time, rectal administration of artesunate might be needed.

Unfortunately, the mortality of severe malaria remains high despite adequate treatment. If artemisinin derivatives are not available, then intravenous infusion of quinine is essential to treat the condition. Intramuscular administration of antimalarial treatments is debatable because absorption has been found to be affected.

P. falciparum has a poor prognosis if left untreated. However, it has an excellent prognosis if diagnosed and treated early. Prognosis of cerebral malaria Is invariably fatal with 15-20% mortality rate.

Malaria in children via nih.gov