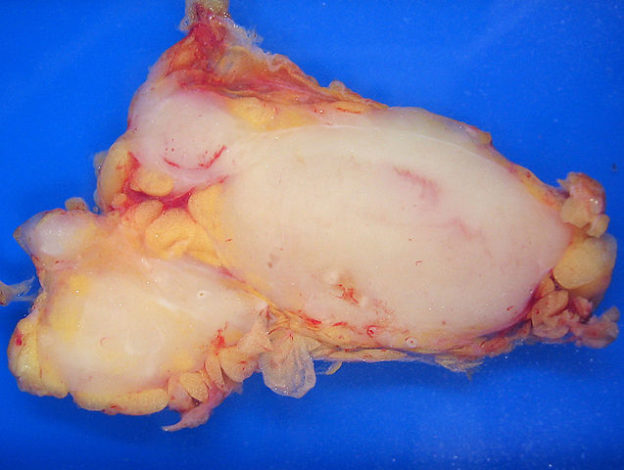 Image: “Macroscopic aspect of the cut surface of a human lymph node replaced by lymphoma. The node was about 6 x 4 cm (2.5″ x 1.5″). The lymphoma is the nodules of pinkish tissue surrounded by yellowish fatty tissue. Upon histological examination, the node contained follicular lymphoma.” by Emmanuelm. License: CC BY 3.0

Hodgkin lymphoma (HL), previously called Hodgkin disease, is a cancer of B-cells that has unique clinicopathologic features and histological composition, hence separated from other lymphomas. It contains pathognomonic Reed-Sternberg cells, having a mirror image (owl’s eye) nuclei, within an inflammatory background.

Hodgkin lymphoma makes up around 10% of all lymphomas. Its incidence in Europe and the United States is around 2-3 cases per 100,000 persons. The incidence of Hodgkin lymphoma has a bimodal distribution with the first peak in young adults (15-30 years) and the second peak in older adults (>55 years). It is also more common in males except for the nodular sclerosing subtype, which is more common in young females. The Epstein-Barr virus infection also increases the probability of contracting HL.

The Hodgkin lymphoma most commonly presents with painless, non-tender, rubbery, lymphadenopathy, typically involving the neck. These persons often have constitutional symptoms (called B-symptoms) such as:

The fever is often intermittent, more pronounced in the evening and night time, and becomes continuous later on. Less often, few people exhibit a characteristic periodic fever called Pel-Ebstein fever, in which fever occurs for 1-2 weeks followed by 1-2 weeks of afebrile periods. Apart from these symptoms, the patient may also present with the following clinical features:

The Hodgkin lymphoma is subdivided into multiple sub-types depending upon the histological characteristics, clinical features, and prognosis.

In general, the prognosis of Hodgkin lymphoma is good if there are large numbers of normal-appearing cells and a less number of Reed-Sternberg cells. 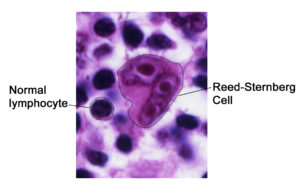 Bone marrow biopsy is indicated in advanced stages of the disease or any abnormality on the complete blood count that is suspicious for bone marrow involvement. Lumbar puncture and magnetic resonance imaging are informative in the cases of CNS involvement

CT scans of the chest, abdomen, and pelvis (used in order to detect abnormal findings include enlarged lymph nodes, hepatomegaly and/or splenomegaly, lung nodules or infiltrates, and pleural effusions)

Positron emission tomography is informative in diagnostics of initial stages of the disease.

Stage II: Involvement of two or more lymph node regions on the same side of the diaphragm alone (II) or with the involvement of limited, contiguous extra-lymphatic organ or tissue (IIE).

Stage III: Involvement of lymph node regions or lymphoid structures on both sides of the diaphragm (III) which may include the spleen (IIIS) or limited, a contiguous extra-lymphatic organ or site (IIIE) or both (IIIES).

All stages are sub-classified to indicate the absence (A) or presence (B) of one or more of the constitutional symptoms i.e. significant unexplained fever, night sweats, or unexplained weight loss.

The International Prognostic Score (IPS) is one of the strongest predictors of prognosis for patients with Hodgkin lymphoma. It can be easily calculated in the clinical setting and is based upon the following seven characteristics:

In IPS, one point is given for each of the above characteristics and the total score may range from zero (very good prognosis) to seven (poor prognosis).

The treatment of Hodgkin lymphoma depends on its staging, sub-type, general health and age of the patient and complete blood counts. For example, the 5-year survival rate of stage I-A nodular sclerosis HL is >90%, while the 5-year survival rate of stage IV-B lymphocyte depleted HL is <40%. The management options are induction chemotherapy, radiation therapy, salvage chemotherapy, and hematopoietic stem cell transplantation.

Recurrent lymphoma or unresponsive to the treatment HL

LYMPHOMA (a part of the group of tumors of the hematopoietic and lymphoid tissues). Lecture in internal medicine for IV course students via http://dspace.univer.kharkov.ua

Epidemiology and etiology of Hodgkin’s lymphoma via watermark.silverchair.com