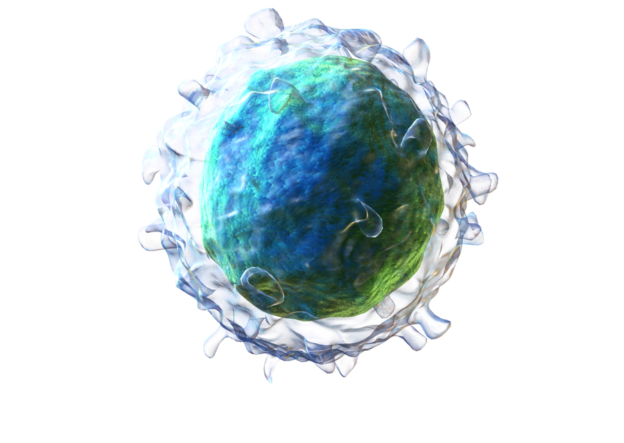 The human body operates on two basic types of immunity. Individuals are born with innate immunity, which includes the skin, stomach acid, the enzymes in tears and saliva, and the complement system. However, when the barriers constituting innate immunity are breached by an invading organism, adaptive immunity comes into play. It is comprised of the highly specific B- and T-lymphocytes, which operate in two distinct modes. Thus, there are two types of adaptive immunity, the antibody-mediated, or immunity of B-cells, and the cell-mediated immunity of T-cells. Lymphocytes are produced from the committed lymphoid progenitor (CLP) cells.

White blood cells are the cellular component of immune responses. The immune system’s function mostly depends on lymphocytes that are either T-cells or B -cells. T-cells are in the highest proportion of all lymphocytes (80 %), followed by B-cells (10 %) and natural killer cells (10 %). The proportions of lymphocytes in the lymph and blood vary continuously.

This is due to the constant circulation of lymphocytes among the lymph vessels, the blood, and sites where antigens may be found, like tissues, the spleen, and mucosal surfaces.

There are two types of circulation:

The T-cells and B-cells have specific TCR and BCR receptors on their membranes, which are highly receptive to a specific antigen. They develop as these cells mature in the thymus and bone marrow, respectively.

During this activation, the antigen-presenting cells (APCs) also secrete costimulatory molecules that will cause T-cells and B-cells to proliferate. These costimulators include the chemokines and cytokines, which are produced by macrophages and activated T-cells.

There is a small group of T-cells and B-cells that are specific for each antigen. The specificity is so great that immunologists believe that there are 107 different specificities in the 1012 cells in the body. The group that is specific for the antigen is then selected and activated.

Hence, the B-cells, T helper cells, and the dendritic cells all interact together to stimulate an immune activation. This results in the recruitment and multiplication of a specific clone that will be released into the blood, a process called the adaptive immune response.

The entire system starts with identifying the foreign antigen, which is the reason why lymphocytes keep patrolling the entire body. They do so to seek out any foreign invaders so they could alert the lymphocytes in the nodes to trigger an adaptive immune response.

By birth, normal adults possess 1012 lymphocytes, 10% of which are in circulation. The circulation starts when the lymphocytes enter the lymph vessels from the lymph nodes. These, then, pass through the efferent lymphatic duct and collect in the main thoracic duct, which drains into the subclavian artery to the hand.

Lymph and lymphocytes from other parts of the body are collected in lymph channels. Then they are coalesced via progressively larger vessels to drain via the afferent lymphatics to the peripheral lymph nodes. From there, they enter the thoracic duct and ultimately the blood.

The naive lymphocytes go through the lymphoid organs, while the activated ones enter the blood to reach the infection site. This circulation is specific for the T-cells because their job is to seek out and attack foreign invaders. B-cells, on the other hand, convert into plasma cells and secrete their antibodies from within the lymph nodes. 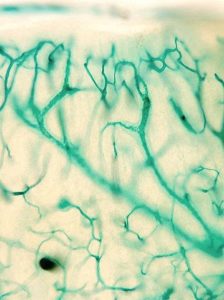 The high endothelial venules have an essential role in cells entering the lymph node. These are simple blood vessels with cuboidal, plump endothelial cells instead of the regular flat ones.

They are present in the post-capillary location in the lymph nodes and house the receptors to bind these lymphocytes. The role of high endothelial venules is to provide a site of attachment for the lymphocyte to home. These venules have the specific ligands for the T-cell homing receptors. The ligands include the CCL21 and the L-selectin ligand, which are called the cell adhesion molecules.

There are basically five groups of these molecules, including the cadherin, the Ig-superfamily CAMS, Mucin-like CAMS, Selectins, and Integrins. Integrins play a vital role in cell-to-cell interactions and cell-extracellular matrix interactions. These will bind to the naive lymphocytes and help them enter the lymph nodes, thus playing a vital role in procuring lymphocytes. This adhesion process is called lymphocyte homing.

Homing is the process by which circulating lymphocytes adhere to specialized endothelial cells within lymphoid organs. The process is facilitated by two main mediators:

Afterward, aided by the chemokine gradient, the cells spread out towards the site of infection in both the dermis and the epidermis. There, they fight against the invading organism along with the natural killer cells, macrophages, and other WBCs.

Similarly, these cells bind to peripheral tissues like the lungs, heart, and GIT, aided by their special binding receptors, including CLA, CD43, CD44, LFA-1, VLA-4, P- and L-selectins. 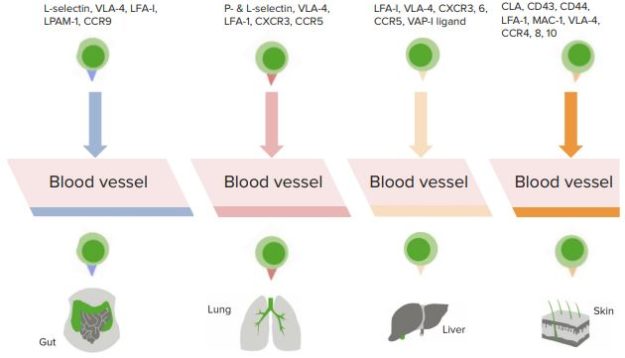 During this process, antigens present in the gut are taken to the Peyer’s patches. Here, antigen processing and presentation to T-cells result in their activation. Activated T-cells are then taken by afferent lymphatics to the mesenteric lymph nodes. There, they undergo proliferation and are then distributed via the efferent lymphatics to the blood. The blood, in turn, distributes all these cells to the mucosal tissues, ensuring lasting and effective immunity.

These are special receptors present on the T-cell membrane hat, allowing it to attach to the blood vessels, bind, and enter the tissues to perform its action. These receptors are specific for certain molecules on the endothelial cells themselves.

There are five types of homing receptors, but the most common are the selectins and integrins. The selectins offer temporary weak attachment, while the integrins offer strong attachment that actually allows homing. Naïve T-cells have L- selectin, CCR7, and LFA-1, while the activated T-cells, both effector and central, have E- and P-selectin ligands, CXCR3, CCR5, LFA-1, and VLA4.

Integrins bind the ECM outside a cell to the cytoskeleton (specifically, the microfilaments) within the cell. The ligand in the ECM that a specific integrin can bind to is highly dependent on the α and β subunits that make up the integrin.

Included among the ligands of integrins are fibronectin, vitronectin, collagen, and laminin. The association between the cell and the ECM strengthens the cell, preventing it from being torn out of the ECM.

Cellular connection to the ECM is essential in the construction of a multicellular living being. Integrins are not just snares; rather, they give the cell important notifications about its surrounding cells and the environment.

Along with signals that stimulate receptors via the help of soluble molecules like VEGF, EGF, and numerous others, they implement a cell’s choice of what natural move to make, be it connection, development, death, or separation. In this way, integrins lie at the heart of numerous cell organic procedures.

The cells connect via an arrangement of intercellular bonds, which comprise of integrins and numerous cytoplasmic proteins, for example, talin, vinculin, paxillin, and alpha-actinin.

These exert their effects by controlling kinases, for example, FAK (central attachment kinase) and Src kinase relatives to phosphorylate substrates. These bond buildings join to the actin cytoskeleton. The integrins serve to connect the two systems over the plasma film: the extracellular ECM and the intracellular actin filamentous framework.

Integrin alpha6beta4 is an exemption. It has connections to the keratin part of the fiber framework in epithelial cells.

Focal adhesions are big complexes, produced by the grouping of several integrin-to-ECM associations. The groups likely give adequate intracellular restricting destinations to allow the arrangement of stable signaling molecules on the cytoplasmic side of the cell layer. Thus, the focal adhesions contain the integrin ligand, integrin atom, and partner plaque proteins.

Binding is stimulated by changes in free energy. As expressed before, these buildings associate the extracellular network to actin packs. Cryo-electron tomography uncovers that the attachment contains particles on the cell layer with a distance across of 25 +/ – 5 nm and separated at roughly 45 nm. Treatment with Rho-kinase inhibitor Y-27632 diminishes the span of the molecule, and it is greatly mechanosensitive.

One imperative capacity of integrins on cells in tissue culture is their part in cell relocation. Cells stick to a substrate through their integrins. Amid development, the cell makes new connections to the substrate at its front and simultaneously discharges those at its back.

After release, integrin atoms are reclaimed into the cell by endocytosis; they are transported through the cell to its front by the endocytic cycle, where they are added back to the surface. Thus, they are cycled for reuse, empowering the cell to make crisp connections at its driving front, aiding in chemotaxis.

Once the T-cells are activated, they result in the formation of three types of cells, the helper T-cells, the cytotoxic T-cells, and the suppressor T-cells, each with their own function. Once these cells enter the blood, they are directed towards the site of infection.

There are four families of chemokines, organized according to the arrangement of cysteine in their molecules. They include the C family, the CC family, the CXC family, and the CX3C family.

The different chemokine molecules are detected by the 7-transmembrane g protein-coupled chemokine receptor that results in the activation of the actin filaments and the locomotion of the cells to the site of infection. This can occur in the Peyer’s patches of the GIT, in the skin, or any other place. Wherever the infection is, lymphocytes have the ability to seek it out and destroy it.

The chemokines function in the activation of both T-cells and B-cells. They also play a vital role in chemotaxis, where they direct the white blood cells towards the site of infection. It is these chemokines which help create a gradient for the lymphocytes to follow, guiding them to the actual infection site.

Besides the cells that are actually involved in the immune response, antigen presentation also results in the production of memory T-cells. These cells possess specificity against the one specific antigen. This helps create a secondary immune response of higher severity if the antigen happens to invade the body again.

These T-cells play the role of the immediate attackers. As soon as the antigen is detected, these cells are activated and serve to eliminate the invading organism without having to migrate from the lymph nodes.

Leave a Reply to Khansa Hagelmahi

One thought on “Lymphocyte Recirculation and Homing”