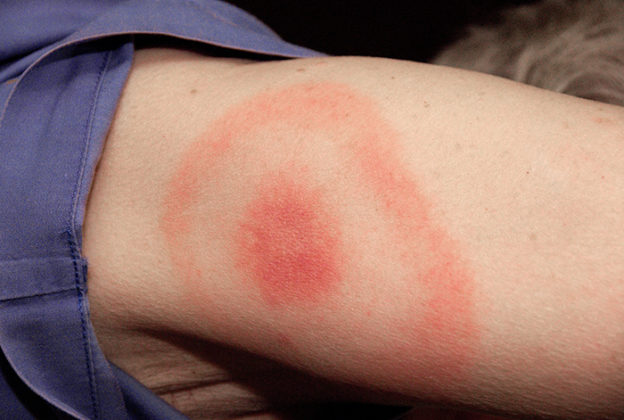 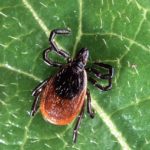 Lyme disease is caused by an infection by bacteria of the species Borrelia burgdorferi, Borrelia mayonii, Borrelia afzelli, and Borrelia garinii. These belong to the family of gram-negative spirochetes. The agents are transmitted to humans via bites of infected black-legged ticks known as deer ticks. The ticks are more common in grassy and woody areas. The disease manifests itself in different organs; most commonly affected are the skin, the neuro system, and the joints.

Lyme-Borreliosis is named after the village Lyme (Connecticut, USA). It was in this village, where joint inflammation occurred frequently. Wilhelm Burgdorfer discovered the bacteria in 1981, but the skin manifestations had already been described in Europe.

Lyme-Borreliosis represents the most frequently transmitted disease via ticks in Europe.

Etiology and Pathogenesis of Lyme Disease

Lyme-Borreliosis is caused by different species of borrelia, that all belong to the complex Borrelia burdoferei sensu lato. The following 4 human-pathogenic species are most often represented:

Reservoir of the Borrelia

Path of infection and pathogenesis of the Lyme Borreliosis

Image: “The black-legged tick (Ixodes scapularis), the primary vector for Lyme disease in the central and eastern United States (and elsewhere too. Uploader).” by A New View on Lyme Disease: Rodents Hold the Key to Annual Risk. Gross L, PLoS Biology Vol. 4/6/2006, e182. License: CC BY 2.5

In Central Europe, borrelia bacteria are transmitted via the bite of the hard tick Lxodes (I.) ricinus and Lxodes scapularis. The ticks can move from low vegetation (1.5 m) to humans.

Borrelia bacteria can survive for many years in the host, for example, in phagocytes.

There are three stages to the symptomatology of a Borreliosis: 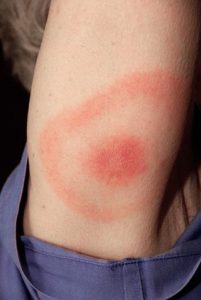 Erythema chronicum migrans is a bull’s eye rash that appears about 2 weeks after a tick bite. This skin reaction corresponds to the local spread of the bacteria in the dermis. Just half of the patients, that are experiencing stage 1, have Erythema chronicum migrans. Symptoms, such as fever, myalgia, arthralgia, and weariness can occur. Typically, the patients without those symptoms have issues in the respiratory tract (flu without a cough, sputum or rhinitis).

Meningoradiculitis or Bannwarth-syndrome can include radicular pains, partly radicular paresis, peripheral facial palsy (often on both sides). Symptoms can include joint involvement, myocarditis, pericarditis or Lympadenosis cutis benigna. The latter describes reactive hyperplasia of the lymphatic cells. The Lymphadenosis cutis benigna manifests itself mainly in terms of bluish-red nodes in the skin, for example, near the earlobe.

The patients can suffer from Acrodermatitis chronica atrophicans herxheimer. This dermatologic manifestation of the Borreliosis has chronic-progressive stages; the extensor sides of the extremities are the most affected. At first, there is edema. Next, atrophy of the subcutis develops resulting in the subcutaneous fat whereby the thickness of the skin becomes reduced and the vessels beneath the skin can shine through. Finally, the affected parts of the skin become sclerotic and develop a significant thickening that is hairless. Other symptoms include Lyme arthritis with a 90% manifestation in the knee joint. There is also a possibility of eye involovment with uveitis, keratitis, episcleritis, and retinal vasculitis.

The symptoms appearing in the stage 3 of a chronic neuroborreliosis are:

Note: The staging for Borreliosis should be considered as a theoretical construct, as it is too artificial.

For the clinical classification, the categorization is considered in an early and late manifestation of the disease:

Diagnosis and Treatment of Lyme Disease

The Lyme-Borreliosis is primarily a presumptive clinical diagnosis that is supported by medical history and laboratory diagnostics. 80–90% of the patients with clinical neuroborreliosis will have the suspicion confirmed by a specific intrathecal antibody synthesis.

Note: If there is at the same time infection with syphilis, it may happen that false positive findings occur because of cross-reactions (TPHA test).

Dependent on the stage of the disease, there are many possibilities that can be considered for a differential diagnosis:

Prophylaxis and Prevention of Lyme Disease

If the tick is removed within the first 12 hours, the risk to be infected with Borrelia is very low. For the removal, a tick tweezer should be used. For persons from non-endemic areas, there is no need for prophylactic antibiotics, but the site of the tick bite should be observed.

Note: There is no vaccine against Borreliosis yet. A person who already suffered from Borreliosis is not immune to a re-infection.