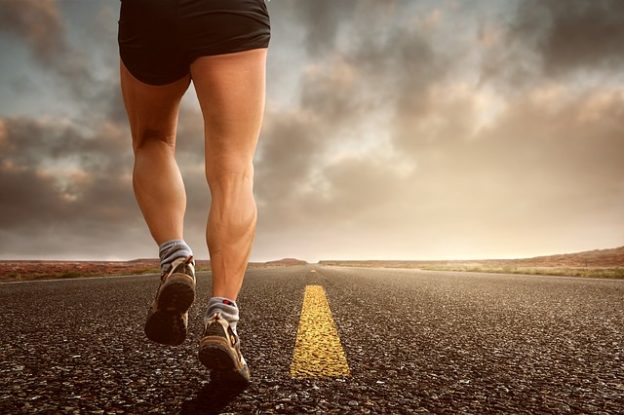 Lower limb anatomy includes the foot, leg, thigh, and gluteal region. The lower limb is comprised of four major parts, i.e., a girdle formed by the hip bones, thigh, leg, and foot. The human lower limb, particularly the gluteal muscles, knee extensors, and the posterior calf muscles are specially adapted to bear weight in an upright position and to walk.

There are 2 layers of muscles in the gluteal region:

They are supplied by gluteal nerves and arteries approaching through the greater sciatica foramen.

The gluteus medius and minimus are fan-shaped and positioned deep to the gluteus maximus, a large muscle with numerous attachments. Laterally, the tensor fasciae latae help stabilize the lateral aspect of the knee joint.

The anatomical and functional details of these muscles can be tabulated as follows:

Within the femoral triangle, the femoral artery gives rise to a branch called the profunda brachii, which is a deep artery. It passes deep to the adductor longus and supplies the thigh musculature. 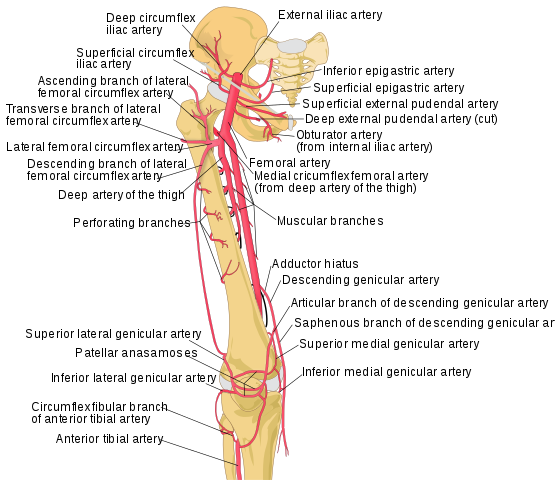 The gluteal region is supplied by gluteal arteries (internal iliac artery) – important anastomoses may occur between the two.

The medial thigh is supplied by the obturator artery (a branch of the internal iliac artery). As the femoral artery passes distally, it changes its name to reflect its new location. 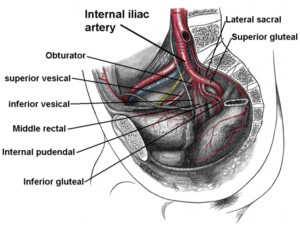 Image: “The arteries of the pelvis. Right side (distal from spectator).” by Mikael Häggström. License: Public Domain

The Cruciate anastomosis connects the profunda brachii and inferior gluteal arteries The contributing branches are:

The piriformis muscle is an important landmark for neurovasculature relations in the gluteal region.

The important structures, and their relative locations to the piriformis muscle, are:

The gluteal region’s nerve supply is maintained by the following:

The piriformis, gemelli, obturator internus, and quadrates femoris are the hip’s lateral rotators. Basic details about these posterior thigh small muscles are summarized as follows: 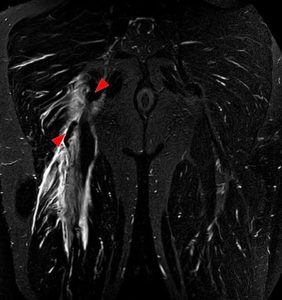 Image: “Tear of the hamstrings muscles at the ischial tuberosity seen on MRI (coronal STIR). The arrowheads indicate the tuber and the retracted tendon stump. Significant bleeding around and into the muscles.” by Hellerhoff. License: CC BY-SA 3.0

‘Hamstring’ muscles are posterior to the femur bone in the thigh. The semimembranous, semitendinosus, and long head of biceps femoris constitute the hamstrings. They originate from ischial tuberosity and insert onto the tibia and fibula, thus crossing two joints: the hip and the knee. They participate in the extension of the thigh and the flexion of the leg.

The short head of the biceps is not a hamstring; it crosses only the knee joint and is innervated via the common fibular nerve.

The hamstring muscles are supplied by perforating branches which originate from the profunda femoris (a branch of the femoral artery). These pierce the adductor magnus to enter the posterior compartment.

The anatomical nature and functional status of the muscles of the posterior thigh “hamstrings” can be summarized as follows:

Cross-section of the thigh

The transverse section of the thigh reveals the fascia lata forming three muscular compartments. The septae in between these compartments are: 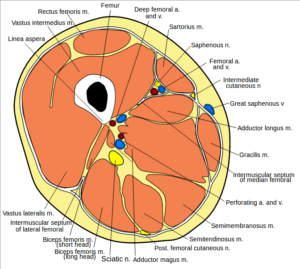 The nerve supply of each compartment can be mentioned as follows:

Arterial supply of the Lower Limbs

Popliteal fossa is a fat-filled, diamond-shaped space located posterior to the knee joint. It contains all the neurovascular structures that pass from the thigh to the leg.

The boundaries of the popliteal fossa are:

The popliteal fossa is comprised of all neurovascular structures that pass from the thigh to the lower leg. 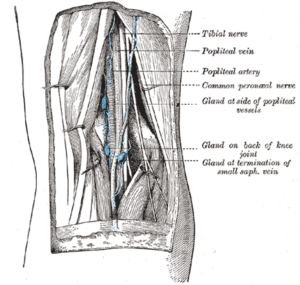 The contents of the popliteal fossa can be summarized by the following:

The popliteal artery is the direct continuation of the femoral artery within the popliteal fossa. It terminates by dividing into anterior and posterior tibial arteries at the inferior border of popliteus.

The popliteal artery gives rise to five genicular arteries that supply the joint capsule and ligaments of the knee joint. They form the genicular anastomosis. They also receive descending branches from the femoral and lateral circumflex arteries. They can be summarized as follows:

The gluteal region consists of the glutei maximus, medius and minimus, and tensor fasciae latae muscles. They are specialized to bear weight and maintain the horizontal balance of the pelvis, while one leg goes in swing phase during walking. The inferior gluteal nerve supplies the gluteus maximus, and the superior gluteal nerve supplies the gluteus medius and minimus.

The posterior thigh muscles are the lateral rotators of the hip, namely:

The hamstrings bring about flexion of the knee and extension of the hip joint. The semimembranosus, semitendinosus and long head of biceps femoris constitute the hamstrings. The tibial component of the sciatic nerve supplies the hamstrings.

The diamond-shaped, fat-filled cavity behind the knee joint is bound by the gastrocnemius and the hamstrings. While the popliteal fascia and skin constitute the roof of this fossa, the floor is comprised of the popliteal surface of the femur, popliteal fascia, and muscle.

The contents of the popliteal fossa are: