Bones of the Lower Extremity — Femur, Tibia, Fibula, Phalanges and More
Are you more of a visual learner? Check out our online video lectures and start your anatomy course now for free! 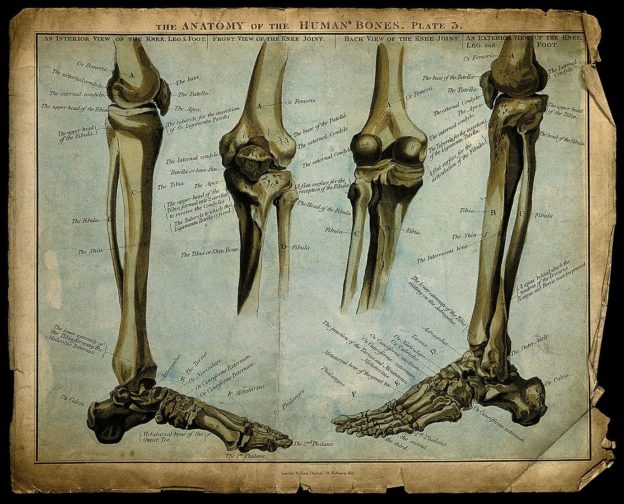 The hip bone articulates with the sacrum, the femur, and its opposite counterpart. It is responsible for movements in all three planes and is therefore prone to injury if its supporting structures fail to function.

Ossification of the hip bone

It is ossified from eight ossification centers: three primary and five secondary centers. The three primary centers – one each for the Ilium, ischium and the pubic bone – unite around a Y- shaped tri-radiate cartilage around puberty. Around this time, secondary centers or epiphyses appear in that cartilage and also in the anterior inferior iliac spine, the iliac crest, ischial tuberosity, and the pubic symphysis. These eventually unite about the twenty-fifth year.

The ilioinguinal ligament connects the anterior superior iliac spine to the pubic symphysis and separates the thigh from the anterior abdominal wall. The iliac crest has an outer and an inner lip which provides attachment to several muscles.

This bone forms the posteroinferior aspect of the hip bone. It consists of two rami (the superior and inferior) and a body. The body forms more than two-fifths of the acetabulum and has an internal and an external surface. The internal surface forms a part of the pelvic wall and the obturator externus muscle originates from it.

Along its posterior border, there is a triangular, pointed eminence called the ischial spine, which provides attachment to the gemellus superior, the coccygeus, levator ani, and the pelvic fascia. The sacrospinous ligament is attached to the pointed tip of the ischial spine.

Superior to the spine is the greater sciatic notch through which passes the piriformis muscle, the superior and the inferior gluteal vessels, nerves, the sciatic and posterior femoral cutaneous nerves, the internal pudendal vessels and nerve and the nerves to the obturator internus and quadratus femoris.

The lesser sciatic notch lies inferior to the ischial spine and is converted into a foramen by the sacrospinous and sacrotuberous ligaments. It transmits the obturator internus, its nerve, and the internal pudendal vessels and nerve.

The gluteus maximus muscle obscures the ischial tuberosity on hip extension, but the tuberosity is palpable when the thigh is flexed. The two rami of the ischium and the pubis form the inferior aspect of the obturator foramen. The external surface of the superior ramus provides attachment to the obturator externus, the quadratus femoris, and the adductor magnus.

This forms the anterior part of the hip bone and consists of the body, a superior and an inferior ramus. The body of the pubis forms one-fifth of the acetabulum. The bodies of the two sides meet at the pubic symphysis in the median plane. The symphysial surface of the body is covered by cartilage, while the pelvic surface supports the bladder.

The rough femoral surface of the body provides attachment to muscles. The pubic tubercle on the anterior aspect of the body is an important anatomical landmark which can be found 3 cm from the median plane by tracing the tendon of the adductor longus muscle superiorly.

The spermatic cord crosses the pubic tubercle, which is a guide to the superficial inguinal ring, the femoral ring, and the saphenous opening. The pectineal line extends from the pubic tubercles along the superior pubic ramus to the iliopubic eminence.

This is also known as the thigh bone and is the longest and the strongest bone in the human body. Extremely strong forces are required to cause femur fractures. The femur connects the hip to the knee. It has a diaphysis and two hypophyses. The superior epiphysis consists of the head, a neck, a greater and lesser trochanter, while the inferior epiphysis consists of the patellar surface, and the medial and the lateral condyle.

The head of the femur articulates with the innominate or hip bone at the acetabulum to form the hip joint. The greater and lesser trochanters are bony projections near the superior aspect of the head. Several hip and groin muscles like the iliopsoas, the gluteus medius, and the adductor longus, are attached to the greater and lesser trochanters of the femur.

The inferior epiphysis of the femur has the medial and lateral condyles, which articulate with the tibia to form the knee joint. The intercondylar fossa is a small depression between the two condyles, which provides attachment to the anterior and posterior cruciate ligaments. These ligaments stabilize the knee joint in the anterior-posterior axis. The patellar surface of the femur adjoins the patella.

Tibia or the shin bone is a long bone which forms the knee joint and connects the femur to the ankle bones. The tibia takes part in forming four joints – the knee joint, the ankle joint and the superior and inferior tibiofibular joints. Its parts include its upper extremity, the body, and its lower extremity.

The upper extremity of the tibia has the medial and lateral condyle. The superior, flat surfaces of the condyles articulate with the femur to form the weight-bearing part of the tibiofemoral or knee joint. The cruciate ligaments and the menisci are attached in the intercondylar area between the two condyles. The patellar ligament is attached to the tibial tuberosity, which is a bony prominence inferior to the condyles.

This is the thin bone on the lateral aspect of the leg, parallel to the tibia. It stabilizes the ankle. The fibular head articulates with the tibia to form the proximal tibiofibular joint.

The distal tibiofibular joint is formed at the medial malleolus with the tibia and the lower end of the fibula. It also forms the ankle joint with the tibia and the talus. Several muscles are attached to the fibula – the peroneus muscles, the soleus, flexors, and extensors of the toes at its distal end, while the biceps femoris is inserted on its head.

The fibula is often a source for bone grafts to reconstruct bone defects in other parts of the body.

The tarsus consists of seven bones: the talus, navicular and the three cuneiforms medially, the calcaneus and the cuboid laterally. In addition, several sesamoid bones may exist e.g. the os trigonum at the posterior aspect of the talus, the os tibiale externum near the navicular tuberosity and the fibular sesamoid.

The talus and the calcaneus start to ossify in fetal life, while the ossification of the cuboid starts immediately after birth. During childhood, epiphyseal centers begin to appear for the calcaneal tuberosity and the talar posterior tubercle.

There are several tubercles, of which the lateral tubercle is called the os trigonum. The tarsal sinus is a deep depression inferior to the neck of the talus and above the calcaneus. The talus and the calcaneus together form the posterior aspect of the transverse tarsal joint.

The calcaneus is responsible for transmitting the body weight from the talus to the ground. It has a prominent bony extension medially called the sustentaculum tali, which supports the talus medially. The calcaneal tuberosity provides attachment to the calcaneal tendon posteriorly and to the short muscles of the sole and the plantar aponeurosis inferiorly. On its anterior aspect, the calcaneus articulates with the cuboid.

The cuboid bone articulates with the calcaneus anteriorly, with the fourth and the fifth metatarsals posteriorly and with the lateral cuneiform and occasionally with the navicular laterally. A groove on its inferior surface may be occupied by the fibularis longus.

The three wedge-shaped cuneiform bones (medial, intermediate and the lateral cuneiform) are located between the navicular bone anteriorly and the first three metatarsals posteriorly. The cuneiforms together form the transverse curvature of the foot.

There are five phalanges: the proximal, middle and the distal. Each phalange consists of a base, a shaft, and a head. Often, the great toe (or hallux) and the little toe have two phalanges each, while the others have one each. The joint between two adjacent phalangeal bones is called the interphalangeal joint.

In the little toe, the middle and the distal phalanges are often fused. During fetal life, the phalanges begin to ossify and postnatally ossification centers appear at their bases.

Flexion and extension, internal and external rotation, abduction/adduction and circumduction. Movements are limited compared to those at the shoulder.

This is a synovial joint which permits flexion, extension and some medial and lateral rotation.

The ankle joint is a simple hinge joint and is capable of dorsiflexion, plantar flexion, eversion, and inversion.

6c. The Bones of the Lower Extremity. 1. The Hip Bone via bartleby.com

The bones of the lower limb via dartmouth.edu

Osteology of the lower limb via orthofracs.com

Structure and Function of the Hip via mccc.edu