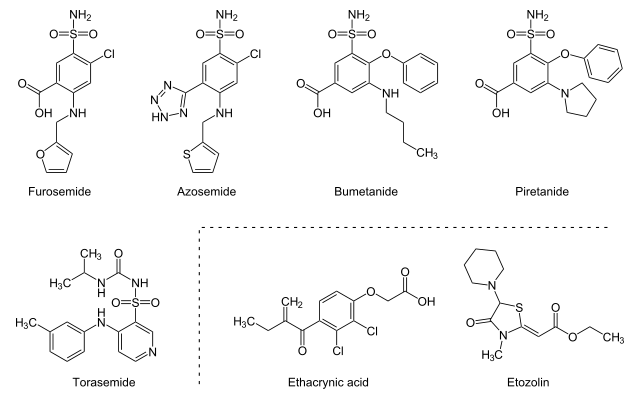 Diuretics are the drugs that increase the urinary output by increasing the excretion of water and sodium from the body. They are considered as the most important therapeutic agents in the treatment of numerous diseases, especially those associated with volume overload such as edema.

Loop diuretics (also called high ceiling diuretics) are one of the most commonly used classes of drug in clinical practice, and exert their action by acting on the thick ascending loop of Henle, hence called “Loop diuretics”.

Among the loop diuretics, the most widely used drugs are:

Furosemide (Lasix): It is one of the most commonly used drugs in the treatment of hypertension and edema caused by congestive heart failure (CHF).

Bumetanide (Bumex): It is indicated for the patients who are unresponsive to the furosemide (called furosemide resistance, occurs during prolonged therapy with furosemide) even at high doses. It is more bioavailable than furosemide and its absorption is not affected by the presence of food. Bumetanide is 40 times more potent (rapid diuresis) than furosemide.

Torasemide (Demadex): It has a more prolonged diuretic action than furosemide, with less potassium loss. No evidence of ototoxicity with torsemide use.

All loop diuretics have the same mechanism of action; however, they differ from each in pharmacokinetics.

They have different routes of administration such as oral and parenteral routes (intravenous/intramuscular).

Thus, switching from intravenous to oral route in those with lesser bioavailability (such as furosemide) requires higher oral doses than the IV dose.

The route of elimination of furosemide is mainly renal with:

The route of elimination is mainly liver, in which they are metabolized by the cytochrome p450 enzyme. 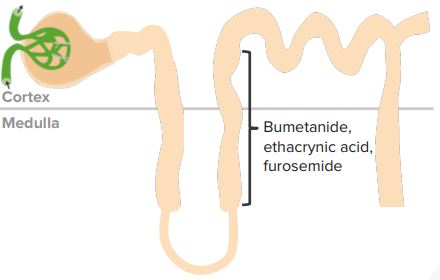 The thick ascending limb of Henle’s loop is the site of action of loop diuretics.

This Henle’s loop is characterized by being impermeable to water, although it powerfully and actively transports the sodium, chloride and potassium ions via the apical membrane Na+-K+-2Cl− cotransporter. This makes the water in early distal tubular fluid hypotonic (about 100 mOsm/kg H2O).

Sodium first binds to the cotransporter, promoting the binding of potassium and chloride ions, followed by binding with a second chloride ion.

Loop diuretic is a powerful inhibitor of Na+-K+-2Cl− cotransporter in the luminal membrane of the thick ascending limb of Henle’s loop, which acts by competing with the chloride site (seemingly the second chloride binding site). 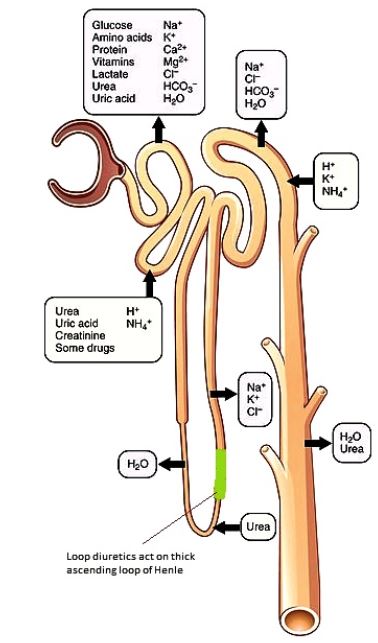 Image: “Site of action (highlighted in green) of loop diuretics in a nephron.” by OpenStax College. License: CC BY 2.0 The image was altered.

This inhibitory effect of loop diuretics results in a decreased rate of sodium, chloride, potassium and other electrolytes reabsorption from these tubules into the medullary interstitium, thus inhibiting the formation of hypertonic medullary fluid. This leads to high osmotic pressure inside the renal tubules associated with a low osmolarity of the medullary interstitial fluid, which results in:

An increased sodium excretion (natriuresis) and increased excretion of other electrolytes, such as chloride and potassium. Magnesium and calcium reabsorption is also inhibited because their absorption in the thick ascending limb depends mainly on the positive lumen voltage gradient, which is lost with loop diuretics usage.

Important: Loop diuretics are the preferred drugs in CHF over thiazides as thiazides are ineffective sometimes and used as maintenance in CHF.

Chronic kidney disease (CKD) and acute kidney insult (AKI) are usually associated with volume overload because of the inability of the kidneys to excrete the salt and water.

Nephrotic syndromes are associated with hypoalbuminemia, which results in driving the water from vascular compartments into the interstitial space, therefore affected patients usually present with volume depletion.

Thus, diuretics should be used in nephrotic syndrome only in cases of severe edema or when there is no significant volume depletion.

Diuretics are commonly used in the treatment of hypertension by increasing water and sodium loss. They can be used as the first-line treatment or as an adjunctive treatment with other hypotensive regimens.

Important: Thiazides are the preferred drugs in hypertension over loop diuretics; furosemide is a weak hypertensive than thiazides.

Loop diuretics increase the calcium excretion by the kidneys; therefore can be used in the treatment of hypercalcemia.

Loop diuretic is usually combined with mannitol in the treatment of cerebral edema to decrease the intracranial pressure. It acts by inhibiting the local brain transport mechanisms, but not by its effect on salt and water excretion.

Large doses of diuretics can lead to volume depletion, with the following subsequent consequences:

(Usually develops within the first 1–2 weeks of therapy.)

In the presence of the antidiuretic hormone (ADH), the high osmotic pressure in the medullary interstitium allows NaCl reabsorption through collecting ducts via the osmotic gradient between the lumen and hypertonic interstitium, resulting in the formation of concentrated urine. Loop diuretics inhibit this normal physiological process resulting in increased sodium and water excretion.

Diuretic-induced volume depletion stimulates ADH secretion from the posterior pituitary, but its effect on the kidneys is limited because of the impairment of lumen-medullary osmotic gradient.

Hyponatremia (serum sodium level of less than 135 mEq/L) occurs usually in the cases of high water intake, especially if associated with impaired water excretion as in elderly patients, and patients with renal diseases.

Important: Thiazides cause severe hyponatremia as compared to loop diuretics; this is due to their action on different sites at the nephron.

Loop diuretics cause potassium depletion by the following mechanisms:

Increased distal delivery of sodium to the collecting duct results in an increased tubular exchange of sodium for potassium with subsequently increased excretion of potassium resulting in hypokalemia.

Hypokalemia can be avoided by:

Most of the reabsorbed potassium from the ascending limb of the loop of Henle via Na-K-2Cl cotransporters is recycled again back to the tubular lumen to drive further absorption of NaCl. Also, the reabsorbed chloride ions move back into the tubular lumen via chloride channels. The cationic potassium and chloride ions generate a net positive voltage gradient which allows the passive absorption of cations: sodium, calcium, and magnesium, via the paracellular pathway between cells.

Loop diuretics can lead to hyperuricemia and gouty arthritis by two mechanisms:

Both loop and thiazide diuretics decrease the uric acid excretion by increasing the reabsorption process of uric acid.

Loop diuretics can lead to metabolic alkalosis (elevation of the serum bicarbonate) by different mechanisms:

Diuretic-induced volume depletion results in the reduction of the extracellular fluid (ECF) resulting in concentrating the bicarbonate (HCO3) in the plasma. This mild rise in HCO3 is buffered by the release of H ions from cells and the uptake of HCO3 into the bone, making this mechanism less effective.

Decreased effective arterial blood volume (EABV) decreases the renal perfusion and thus glomerular filtration rate (GFR) leading to the decreased filtration of HCO3 and its excretion by the kidneys.

Loop diuretics are sulfa drugs that might lead to hypersensitivity reaction, ranging from a rash to acute interstitial nephritis (rare).

Loop diuretics (especially ethacrynic acid and furosemide) can affect hearing temporarily or permanently based on the dose, duration, and route of administration. Ethacrynic acid is the most ototoxic drug in loop diuretics. It causes hearing loss by:

Loop diuretics and other ototoxic drugs, such as aminoglycosides, should be used cautiously together.

Increase the risk of osteoporosis and incidence of fractures due to the diuretics-induced hypocalcemia.

Diuretic-induced hyperuricemia and gout via uptodate.com