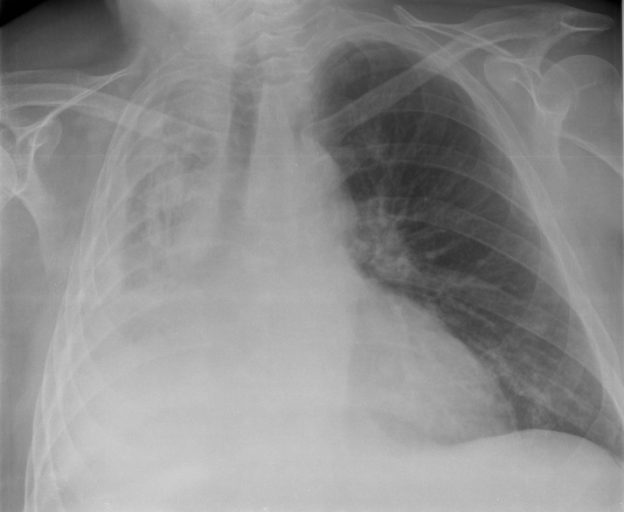 Atelectasis is more common in preterm infants with hyaline membrane disease, patients with acute respiratory distress syndrome, and in the postoperative period. The common features among these three conditions is either the absence of lung surfactant or surfactant dysfunction, both of which are hypothesized to play a crucial role in the pathogenesis of atelectasis.

The postoperative period puts the patient at an increased risk of atelectasis owing to the inability to inhale deeply due to chest pain from an incision, prolonged faulty ventilation, or poor chest physiotherapy.

Children are at an increased risk of atelectasis because of the smaller diameter of their airways, which are more likely to collapse. The chest wall is more compliant in children, which also predisposes them to atelectasis. As stated earlier, the absence or dysfunction of pulmonary surfactants is also a risk factor for atelectasis in children.

Atelectasis is common in both sexes and can occur in individuals of any ethnic origin.

Etiologies of Atelectasis in Children

The primary reasons for atelectasis in children are as follows:

Prematurity can alter the lung-surfactant coating of alveoli. The absence of the lung surfactant is associated with abnormal surface tension; consequently, the alveoli can collapse during expiration.

The other causes of atelectasis in children could result from the following conditions:

The main pathologic change that can lead to atelectasis is an alteration in the surface tension of the alveoli. This can occur due to an absolute deficit of lung surfactant, which is common in hyaline membrane disease, or an alteration in the composition of the lung surfactant, which is induced by anesthetics. The latter is responsible for most cases of postoperative atelectasis.

Obesity, a history of lung disease, duration of surgery, and pulmonary compression are also implicated in the pathogenesis of perioperative atelectasis. If a small bronchiole is obstructed in the lungs, intra-alveolar pores (pores of Kohn) and broncho-alveolar communications (Lambert channels) can ensure adequate ventilation of the affected alveoli and limit the extent of atelectasis.

Note: Lambert channels and pores of Kohn are poorly developed in infants, which explains the increased risk of atelectasis during the post-operative period.

During atelectasis, blood oxygenation is altered. The collapsed lung parenchyma is usually not as compliant as that on the contralateral side. Pulmonary vascular resistance tends to increase in the collapsed lung and pulmonary edema can occur. The consequences of these functional changes are hypoxemia and hyperventilation of the adjacent alveoli. In case of a complete collapse of an entire lung, hyperinflation of the contralateral lung is usually seen.

Clinical Presentation of Atelectasis in Children

If atelectasis occurs during an exacerbation of asthma, bronchitis, or bronchiolitis, the diagnosis can be missed. If atelectasis is extensive and involves multiple lung segments, the patient’s condition may worsen.

The main symptoms of atelectasis in the post-operative period are early fever, tachypnea, cough, and dyspnea. Auscultation of the chest can reveal decreased breath sounds on the affected side. If atelectasis involves a large segment of the lung, a dull or percussion note might be elicited. Wheezing is also a common finding during auscultation of the chest in the case of a collapsed lung segment.

Diagnostic Evaluation of Atelectasis in Children

When a patient presents with the previously mentioned symptoms, a chest X-ray is usually the first imaging modality to be ordered. Atelectasis results in a loss of lung volume and increases in density; thus, the following features may be seen on a chest X-ray:

While a chest X-ray is useful in the identification of atelectasis, it is of limited help in differentiating between the different causes of atelectasis. In fact, some physicians do not consider atelectasis as a diagnosis; therefore, if atelectasis is suspected, the most likely etiology should be identified instead. Treatment of atelectasis is tailored towards the etiology, as discussed in the subsequent sections.

A CT scan is useful in the evaluation of atelectasis in children, as this technique helps in better visualization and accurate localization of pulmonary lesions. Atelectasis is seen as volume loss in a lung CT scan and presents the following characteristics:

If contrast agents are used, hyper-attenuation of the affected segment of the lung may be seen. This presentation is useful to differentiate between atelectasis and lung consolidation due to pneumonia, which does not enhance after the administration of intravenous contrast.

Treatment of Atelectasis in Children

Atelectasis caused by prolonged ventilation can be relieved by the application of PEEP, which stops alveolar collapse by preventing zero-pressure conditions during expiration. PEEP can also re-open collapsed alveoli.

Complications due to atelectasis include respiratory syncytial virus infection, which results in viscous secretions plugging the bronchioles. The use of DNase has been shown to be effective in the treatment of atelectasis. Bronchiolitis-related atelectasis has been previously shown to improve two hours after the introduction of DNase using a tracheal cannula. This condition completely resolves within 24 hours after commencing treatment.

Patients with massive lung atelectasis can have a mucus plug or foreign body obstructing the lumen of a major bronchus. Bronchoscopy with or without bronchoalveolar lavage might be helpful in these situations.

Treatment of the etiology of atelectasis should be initiated as soon as possible to prevent re-collapse of the lung parenchyma. For example, appropriate antibiotics should be used if the patient has an acute exacerbation of asthma due to a bacterial infection in the lung. Bronchodilators or steroids may be needed in a patient with asthma to prevent atelectasis. Plasma electrophoresis and immunoglobulin antibody therapy might be a reasonable option for a child with Guillain-Barré syndrome.