Lipid Control: Niacin, Bile Acid Sequestrants and Fibrates
Are you more of a visual learner? Check out our online video lectures and start your pharmacology course now for free! 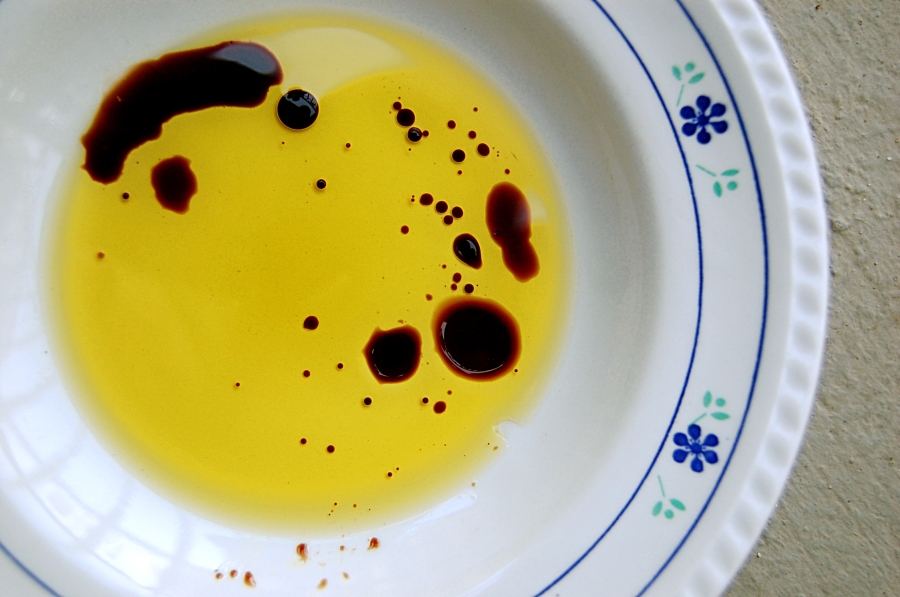 Along with the development of the knowledge base regarding the pathogenesis of dyslipidemia, comes the many treatment modalities focused on lipid control. Bile acid sequestrants, niacin, and fibrates are only among the many drugs used for this purpose.

Screening and Diagnosis of Dyslipidemia

Dyslipidemia is a collective term referring to a group of diseases that are characterized by an increased level of cholesterols and triglycerides in the blood. A lipid panel is usually used for screening and is commonly done in the clinics. Due to the relative convenience and routineness of this screening procedure, it is not uncommon for medical students and interns to encounter problems with lipid metabolism in practice. The measurement of lipids in the blood is optimally done with a blood sample extracted from the patient after fasting.

Aside from identifying which components of the lipid panel are elevated, one should also note if the problem in the metabolism of lipids is primary in nature, or if it is caused by something else entirely. Primary causes of increased levels of cholesterols and lipids are generally genetic and are thought to be brought about by genetic mutations.

Dyslipidemia may also be caused by secondary conditions. Examples of conditions and disorders that could actually raise lipid levels in the blood, without genetic implications in lipid metabolism, are the following:

In the diagnosis and treatment of dyslipidemia, it is important to note which among the components of the said lipid panel is elevated in order to come up with a more specific and efficient approach to treatment. The good thing about this is that the degree of elevation of plasma lipids could actually give health care providers an image of the cardiovascular risks and complications that could arise if the condition is untreated.

Another important thing to note in the management of dyslipidemia is that it can be caused by a magnitude of conditions. In cases of secondary dyslipidemia, one should be sure to manage the underlying cause as well.

Composition and Classification of Lipid Metabolism

Lipids, by nature, are non-polar and may have problems when it comes to transport along with the polar environment provided by plasma, interstitial, and lymph fluid; this is where lipoproteins come in. These complexes are internally composed of triglycerides and cholesteryl esters that bind nonpolar substances such as triglycerides, cholesterols and fat-soluble vitamins to and from the tissues. In order for these to traverse the polar highways, it is enveloped by a hydrophilic shell made up of apolipoproteins, phospholipids and unesterified cholesterols.

Image: “Lipoprotein particles are composed of a lipid core containing cholesteryl esters and triglycerides, and a surface coat of phospholipids, unesterified cholesterol and apolipoproteins.” by AntiSense. License: CC BY-SA 3.0

The densities of these lipoproteins are actually dictated by the number of lipids contained in their core, in relation to the amount of protein they have in their shell. This makes chylomicrons the least dense lipoprotein among the classification, and HDLs the densest.

As mentioned previously, B-48, a component of chylomicrons, come from the intestines. They are responsible for the transport of dietary fats and cholesterols and travels through the thoracic duct into the bloodstream.

In under an hour, a chylomicron is eliminated in the blood by way of lipoprotein lipase (LPL) hydrolysis. LPL is found in the walls of capillaries, and other forms may include those found in the pancreas and liver. From this hydrolysis, the hydrophilic shell and hydrophobic core are taken apart. The lipids and apoproteins found in the surface are taken up by HDLs, while the rest of the chylomicron remnants are endocytosed by hepatocytes by means of a receptor-mediated process.

VLDL and chylomicrons are somewhat similar in terms of metabolism (LPL hydrolysis) but differ in the way they are synthesized. VLDL is created in the liver and delivers triglycerides from there to other parts of the body.

Once they are degraded by the LPL found in the periphery, fatty acids are then produced and used for adipose storage or for fuelling ketone-dependent tissues such as the heart and other muscles. When triglycerides are removed from VLDLs, two lipoproteins come into being – VLDL remnants (IDL) which are endocytosed by hepatocytes, and LDL.

As already mentioned, LDL is synthesized from the triglyceride depletion of VLDLs. Popularly known as ‘bad cholesterol,’ this lipoprotein is known to carry the majority of the cholesterol in the circulation.

Once hydrolyzed by LPL, free cholesterol from these lipoproteins are either used for the synthesis of cell membranes or delivered to the liver for excretion by way of bile production. It has been found out that about 70% of LDL is eliminated from the blood with the help of the cells in the liver.

This is actually a complex formed by the covalent bonding of an (a) protein to one of the apoproteins of an LDL molecule. This lipoprotein is very much similar to plasminogen, the inactive form of the potent fibrinolytic plasmin, in structure. This has been implicated in the formation of atherosclerotic plaques attributed to coronary artery diseases by inhibiting thrombolysis.

The hydrophilic part of HDL, particularly the apoproteins, are produced and secreted by the liver and the intestines. However, unlike the rest of the lipoprotein classes, HDL derives its hydrophobic core from the surface monolayers of chylomicrons and LDL during lipid metabolism, and from cholesterol from the peripheries making them the ‘good cholesterol’. 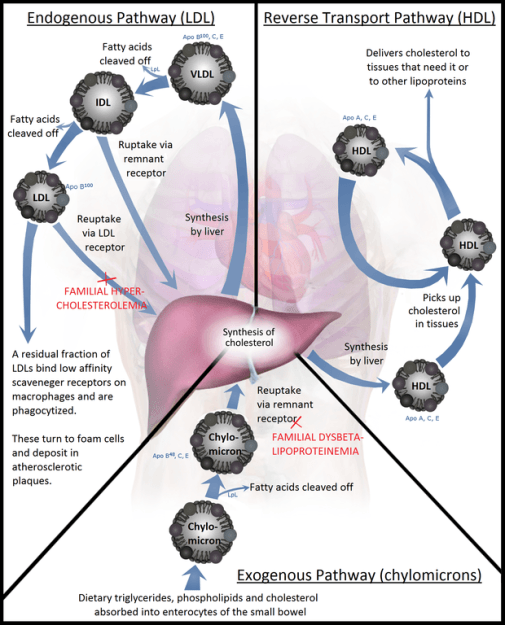 Image: “A diagram to the endogenous and exogenous pathways of lipoprotein metabolism.” by Npatchett. License: CC BY-SA 3.0

Cholesterol may be excreted from the body through conversion to bile acids in the liver. This is made possible through a reaction called 7α-hydroxylation and is regulated with a negative feedback mechanism dictated by the number of bile acids produced. Bile acids, however, are reabsorbed and recycled in the jejunum and ileum, keeping the conversion of cholesterol to bile acids somewhat at a minimum.

With the help of non-absorbable, positively-charged resins such as cholestyramine, colestipol, and colesevelam, bile acids in the digestive tract are prevented from being reabsorbed in the small intestines. This, in turn, depletes the number of usable bile acids, forcing the 7α-hydroxylation reaction in the liver to work faster, using up more cholesterol for bile acid production. Eventually, cholesterol levels in the circulation and in tissues decrease.

Bile acid sequestrants are said to promote a 20% reduction in the LDL levels. However, the consequent decrease in LDL may cause an increase in VLDL in patients with hyperlipidemia. For this reason, it is used along with other medications, such as fibrates or niacin that may address this problem.

Bile acid sequestrants are commonly used for patients with:

These drugs act mainly on the digestive tract and therefore cause local side effects which may include:

Since these drugs bind substances with neutral or anionic charges, these may impair the action of certain drugs. Some examples are:

Niacin or nicotinic acid is found to have effects on the production and degradation of the different lipoproteins in the liver. This compound is said to allosterically inhibit diacylglycerol acyltransferase-2 which is essential for triglyceride synthesis. The suppression of triglyceride synthesis eventually leads to an increase in the intrahepatic degradation of the apoproteins needed for the creation of VLDL and LDL. It also promotes the formation of HDL.

A prostaglandin-mediated effect that manifests as warmth and flushing after taking niacin may be noted. However, this effect may fade off after a few days of taking the medication. It can also be controlled by taking aspirin or naproxen. Other side effects may include:

Gemfibrozil and fenofibrate are absorbed in the intestines, bound to plasma proteins and pass the liver for metabolism. Both decrease VLDL and LDL in some by acting as up-regulators for the transcriptions of LPL and other enzymes involved in the hydrolysis of lipids. This, in turn, promotes the metabolism of fatty acids in the liver and in the skeletal muscles. Since there is increased catabolism of lipids in the peripheries, raw materials for use in VLDL synthesis become short for production. There is also a slight increase in the HDL due to the decrease in the exchange of triglyceride for esterified cholesterols between hepatocytes and HDL.

Fibrates are said to amplify the effects of anticoagulants such as: