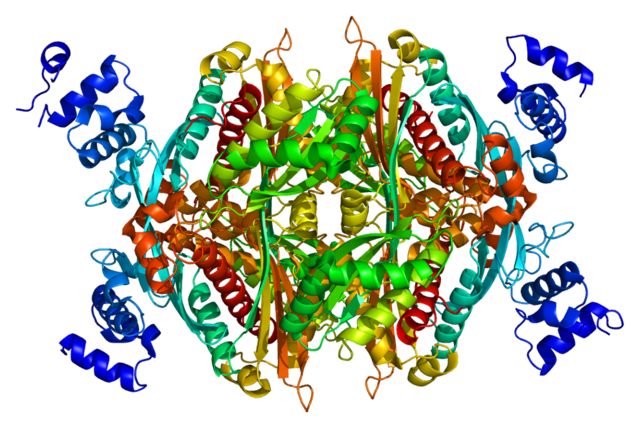 Cholesterol is part of the lipids family, which serves many functions in the body. Aside from the cellular structure, it plays a significant role in hormone production and lipid transport. Cholesterol also plays a major part in the structure of lipoproteins, the primary lipid transport mechanism in the plasma.

A lipoprotein has two essential parts: its hydrophobic core and a hydrophilic shell. This structure helps it to transport non-polar triglycerides and other lipids along a polar pathway created by the plasma, lymph, and interstitial fluid. Its core is made up of cholesteryl esters and triglycerides, while the shell is composed of unesterified cholesterol, phospholipids, and apoproteins.

Lipoproteins are classified according to their densities, which are dictated mostly by the number of lipids contained in their core. Since lipids are less dense than water (or protein), lipoproteins, which contain the most lipids in their core, are said to be low-density.

Chylomicrons are said to be the largest among the cholesterol groups because they contain the most lipids. It stands out among the rest of the groups as the only one which carries exogenous or dietary fat from the gut.

The VLDLs are next to the chylomicrons in terms of size and density. These lipoproteins carry triglycerides from the liver to the peripheries, where they are hydrolyzed into fatty acids and other forms of cholesterol. The former of these products are used for adipose storage or as fuel for muscles that use ketones for energy. such as the heart and skeletal muscles.

LDL is one of the lipoproteins produced when VLDLs are deprived of their triglyceride content. They carry most of the cholesterol in the body. Their degradation and excretion ultimately allow for bile acid formation to occur. They are known as ‘bad cholesterol’.

This lipoprotein is somewhat similar to a potential thrombolytic compound called plasminogen (active form: plasmin) in structure and has been found in most atherosclerotic plaques. It is formed by when an (a) protein covalently bonds with an LDL.

Like the rest of the lipoproteins, the liver secretes the shell of these so-called ‘good cholesterol.’ However, the thing that sets this group apart is that it derives its hydrophobic contents from the triglycerides and cholesterols found lying around in the peripheries. It helps with the eventual metabolism and excretion of these lipids. 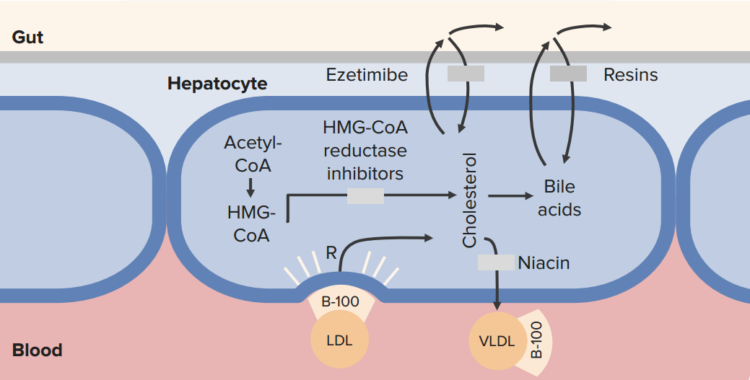 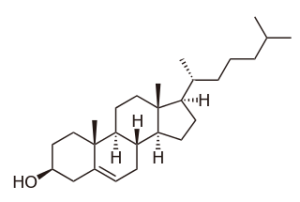 Almost half of our cholesterol comes from our diet; the rest of it is produced by the body. As long as we have nucleated cells, we will be able to synthesize our own cholesterol by metabolizing other macronutrients. The liver and intestines perform about 10% of this metabolic action.

It all starts with acetyl coenzyme a or acetyl-CoA, a product of the catabolism of glucose, amino acids, and fatty acids. It undergoes a series of reactions before its ultimate conversion into cholesterol.

First off, acetyl-CoA is converted into mevalonate. This involves the creation of 3-hydroxy-3-methylglutaryl-CoA or HMG-CoA, an intermediate that must be produced inside the mitochondria. Before this occurs, two molecules of acetyl CoA must be condensed to form acetoacetyl-CoA. Another acetyl-CoA molecule comes into the picture to condense with this product, forming HMG-CoA, which is then reduced to mevalonate with the help of the rate-limiting enzyme HMG-CoA reductase.

Since cholesterol needs a steroid nucleus for its chemical structure, the cell has to convert squalene into something that would resemble one, such as lanosterol. This happens as squalene undergoes a series of reactions with squalene epoxidase and oxidosqualene-lanosterol cyclase enzymes.

Cholesterol is finally created in the endoplasmic reticulum membranes once the side chains and the nucleus of lanosterol are changed by a series of reactions.

Screening for patients who might be at risk for developing lipoprotein disorders is usually part of routine examinations. Therefore, encountering these problems, along with its associated complications, are somewhat common in practice. This is done by extracting blood samples from patients after doing a 12-hour overnight fast.

In general, problems in lipid metabolism are categorized into two. If they are not associated with other conditions such as any concurrent disease, poor diet, or long-term drug therapy, they are thought to be primary dyslipidemia. Single-gene mutations are usually implicated in this classification. Examples are outlined in the table:

Problems in lipid metabolism can also exist as a manifestation of other disorders or conditions in the body. In this case, they are classified as secondary dyslipidemias and may be caused by the following conditions:

The approach to patients with cholesterol metabolism problems is ideally individualized per patient. It usually is geared towards preventing complications, such as the development of cardiovascular diseases. One of the first steps in addressing this goal is the assessment of the patient’s cardiovascular risks.

Lifestyle modification is usually a part of the management of patients with hypercholesterolemia. Obese patients should be counseled to achieve ideal body weight. Nutrition counseling is also advocated for patients to maintain proper nutrition, without significantly increasing lipid levels in the body.

Along with lifestyle changes, the addition of pharmacologic therapy to reduce plasma levels of cholesterol may also be instigated. Medications typically given to patients with hypercholesterolemia may be classified into any of the following groups:

Among these medications, HMG-CoA reductase inhibitors, otherwise known as statins, are frequently the first medications to be prescribed. 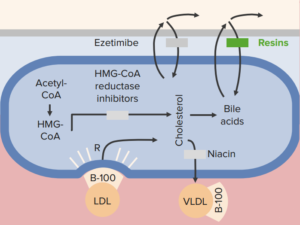 92% of bile acids are reabsorbed normally 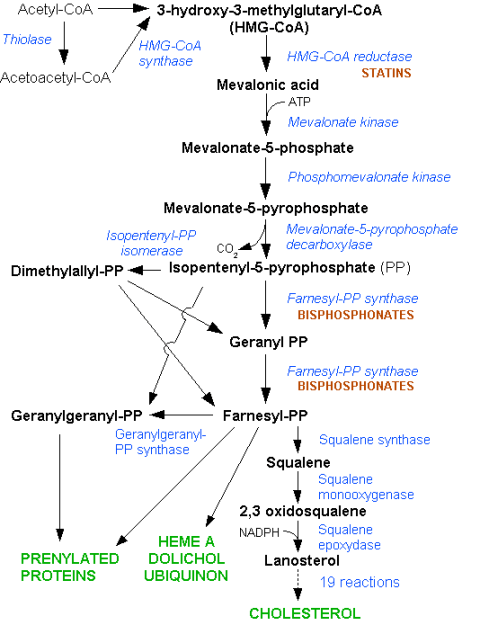 These medications work by acting as analogs to 3-hydroxy-3-methylglutaryl-coenzyme A (HMG-CoA) and are very effective in reducing LDL. From the name itself, HMG-CoA reductase inhibitors, or statins, interfere with the rate-limiting first step of cholesterol synthesis – the conversion of acetyl acetate into mevalonate. This drug also increases the ability of LDL receptors in the hepatocytes to bind with LDL, thereby increasing their degradation and excretion from the circulation. It acts primarily on the liver and is linked to significant decreases in LDL, moderate decreases in triglycerides, and slight increases in HDL.

Most treatment plans to reduce cholesterol levels include HMG-CoA reductase inhibitors for patients who have had acute coronary syndromes. This is because HMG-CoA reductase inhibitors are also proven to reduce vascular damages brought about by oxidation. They also stabilize atherosclerotic lesions, preventing further development of complications from atherosclerotic plaques.

Statins can be prescribed as monotherapy, or in combination with other lipid-reducing medications such as bile acid sequestrants, niacin or ezetimibe. They are usually prescribed for patients suffering from hyperlipidemia (hypercholesterolemia). They are also given to patients with coronary heart disease and atherosclerosis as prophylaxis for myocardial infarction and stroke.

Since these medications interfere with the synthesis of cholesterol needed for fetal development, they are not recommended for use during pregnancy.

Since statins primarily exert their effects on hepatocytes, most of their side effects are associated with altered liver functioning, such as the elevation of serum aminotransferase activity. However, this does not usually warrant discontinuation as long as no other debilitating signs and symptoms of liver toxicity appear. The use of statins among patients with concurrent liver diseases or a history of alcohol abuse may be accompanied by anorexia, malaise, and an undesirable rapid drop of LDL levels in the circulation. For this reason, reduced statin doses are given to these patients. Other side effects that may be seen include:

In contrast, CYP3A4 statins are inhibited by medications that increase the expression of CYP3A4 enzymes:

Fluvastatin, rosuvastatin, and pitavastatin are metabolized using the CYP2C9 enzyme system. Their levels are increased in the plasma by medications that inhibit the expression of CYP2C9 enzymes, including:

Red yeast rice, a fermented product used as a natural food coloring and fermentation agent in Asian cuisine, is known to have statin activity. Therefore, this food should be avoided when taking statins.