Lesions of the Sciatic Nerve 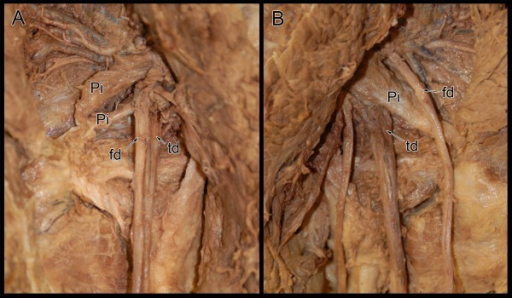 The sciatic nerve is a peripheral nerve emerging from the spinal cord segments L4–S3. It is defined as the strongest nerve in the body and is composed of all the ventral branches of the sciatic plexus.

Motorically, it innervates the ischiocrurale muscles and all muscles of the lower leg and foot. Large part of the skin on the lateral and dorsal surface of the lower leg, as well as the skin of the foot, is supplied by the sciatic nerve. The only exceptions are the medial ankle region as well as a narrow strip along the medial border of the foot, which are innervated by the saphenous nerve.

It leaves the pelvis through the infrapiriform foramen and runs from the gluteus maximus muscle to the obturator internus, the gemelli muscles, and the quadratus femoris muscle. It runs distally between the tibial and fibular flexors of the thigh, below the long head of the biceps femoris.

The sciatic nerve splits into the tibial nerve and the common fibular nerve at the junction of the middle 3rd of the distal femur, before transferring to the popliteal fossa.

The sciatic nerve is susceptible to injuries throughout its anatomic course, being the largest nerve in the human body. The nerve is responsible for the supply of motor functions to the lower limb. Its sensory distribution entails the upper part of the leg as well as the lower part of the leg except for the saphenous territory.

The causes of sciatic nerve lesions are varied. The following causes have been identified:

Sciatic nerve injury through intramuscular injections is the most common among all damages, in which an intense foreign body reaction occurs around the nerve, and the nerve is strangled by the dense scar tissue surrounding it.

Approx. 20% of all sciatic nerve lesions occur during total endoprostheses of the hip. Apart from transection that can happen during detachment of external rotators, pressure damage caused by surgical instruments, as well as the splintering of bone fragments is possible. In addition, mechanical damage by drills, saws, etc. have been observed.

In approx. 14% of all cases in which external pressure was applied, as a result of strain and sprain in flexion of the hip joint, lesions of the femoral nerve were detected. Nervous strain damage is regularly observed during lengthening osteotomies of the femur with length increases of more than 3 cm, provided they are made unilaterally.

Furthermore, sciatic paresis can be caused by exogenous application of pressure and positioning. In children and lean people, compression damage can be caused by prolonged sitting on hard surfaces.

Circulatory disorder, as a result of atherosclerotic stenosis of the common iliac artery, leads to unilateral painful sciatica with vague and not clearly delineated atrophy of the leg muscles. Usually, it then leads to sciatic compression with pain and paresis.

Tumors mainly appear in nerve vicinity and more rarely, in the sciatic stem are detected by magnetic resonance imaging (MRI) or computed tomography (CT), respectively. Tumor can affect the sciatic nerve even before leaving the pelvis.

Infections are rare. Nevertheless, a Staphylococcus aureus abscess in piriformis has led to severe sciatica in the past.

Symptoms of sciatic nerve lesion include pain that starts in the back and moves down to the leg and may radiate into the foot. Weakness, tingling, and numbness in the leg may also occur. The symptoms can get worse through sitting, standing for a long time, or movements that cause the spine to flex. The intensity of the pain is difficult to quantify. However, facial expressions are useful while observing the patient.

Also, the following symptoms in relation to the location of the lesion may occur:

Active flexion of the knee is no longer possible when the sciatic nerve is damaged in the pelvic outlet.

Common fibular nerve (popliteal or head of the fibula)

If damage occurs in this area, the patient has complete paralysis of the dorsiflexion of the foot and toe as well as a tendency to pronate the foot. Further, sensitivity is damaged in the lateral lower leg and dorsum of the foot, and ‘drop foot’ occurs. 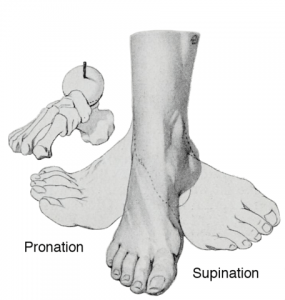 The patient shows the same symptoms as in damages to the common fibular nerve. When the deep fibular nerve is damaged, lifting the lateral margin of the foot is possible. Sensitivity is also ‘only’ disturbed in the dorsal ridge of the foot.

In proximal damage to the tibial nerve, the patient can no longer actively flex the foot and the toes, supinate the foot or spread the toes. Sensory disturbances are found dorsal on the lower leg and the soles.

Tibial behind the internal malleolus

Tibial nerve damage behind the medial malleolus results in pareses of the spreading of the toes, often associated with symptoms of pain and dry soles of the feet. Sensory loss on the soles of the feet is also diagnosed.

Damage to the sciatic nerve through injections in the buttock area is noticeable. Damage arises most commonly from misplaced gluteal injections. Syringe paralysis can occur, which usually causes radiating pain in the leg and results in sensory and motor defects. In some patients, pareses of foot and toe extensors ensue after a few hours or days.

As mentioned above, tumors, fractures, and bruises responsible for damages to the sciatic nerve can be detected by utilizing CT and MRI.

Besides visible movement restrictions, pathological deformities of the feet, pain symptoms, etc., sciatic nerve lesion can be diagnosed through clinical function tests, among other things. The examiner can check the function of the knee flexors to diagnose a lesion. Ideally, the function of the knee flexors is examined when the patient is lying on their front. The patient bends their knee to about 60%, and on applying the test pressure, the distal lower leg will go towards extension. With tension, the medial (musculus semitendinosus and musculus semimembranosus) and lateral (biceps femoris) tendons that form the boundary of the popliteal fossa, are palpable.

Clean sectioning and smaller defects are treated with end-to-end neurorrhaphy (nerve suture), while slight flexion is applied to the knee joint. These usually occur along the thigh up to the division point above the knee pit and are mainly caused by cuts or gunshot wounds.

In cases of major defects, a nerve transplant may be required. In cases of complete injury of the sciatic nerve, the absence of protection sensitivity of the soles of the feet is possible. Adequate protection is, therefore, often considered a success. Restoration of plantar flexion and dorsal extension, to a reasonable extent, are also considered satisfactory rehabilitation results.

The main preventive measure should be preventing the dropping of foot and contracture of calf muscles. An aluminum night-shoe should be worn at night and a shoe with plastic inserts during the day.