Lesions of the Femoral Nerve

Image : “Illustration (A) and photograph (B) reveals unilateral (left side) femoral nerve variant. The femoral nerve (a) emerged bilaterally lateral and deep to the psoas major muscle (PM). While the right femoral nerve maintained its usual path, the left femoral nerve was pierced (arrowhead) and divided into two separate divisions by an accessory slip of the iliacus muscle (*). These two separate divisions of the femoral nerve converged (double arrowheads) into a single division (b) and divided into its usual branches. Also labeled bilaterally is the iliacus muscle (Il). (Original anatomical illustration by Frank Scali, DC).” by Battaglia PJ, Scali F, Enix DE – Chiropr Man Therap (2012). License: CC BY 2.0

The femoral nerve is a peripheral nerve originating from the spinal cord segments L1 to L4 and containing motor- and sensory nerve fibers. The motor nerve fibers are responsible for muscle contractions and control body movements. The motor fibers of the femoral nerve supply the iliopsoas muscle, as well as the extensors of the knee joint. Sensory fibers transfer the signals from the periphery to the central nervous system (CNS). The sensory fibers supply the skin at the ventral surface of the thigh, the medial surface of the lower leg, as well as the tarsal.

As the strongest nerve originating from the plexus lumbalis, its course proceeds between musculus psoas major and musculus iliacus. It passes through the lacuna musculorum and proceeds laterally of the vasa femoralis into the fossa iliopectinea where it divides in a fan-shaped pattern into:

The leading causes of damages of the femoral nerve are distinguished into:

Damages of the femoral nerve in connection with abdominal rectopexy can also result from retrocecal (behind the colon) operations of the appendix or kidney transplants. Furthermore, femoral paresis that does not always recede can be observed after implanting a total prosthesis of the hip joint. In the case of interventions in vascular surgery, lesions of the aorta abdominalis and the iliac vessels caused by ischemia are also possible.

The femoral nerve is a preferred body region for blood clotting disorders. Hematoma can form and show in the groin due to bleedings into the fascia. In such cases, the nerve stem at the inguinal ligament is particularly sensitive to pressure pain. The disappearance of the psoas edge on the paretic side caused by the hematoma can be a hint to the cause of the paralysis. In many cases, the hematoma recedes on its own and there is no need for surgery.

Besides the previously mentioned reasons, medical conditions have also been noticed in cases of retroperitoneal malignant lymphomas, prolonged coma, abdominal aortic aneurysms, or psoas abscesses. Additionally, diabetes is known to be a significant cause of femoral neuropathy as a result of variations in blood pressure and blood sugar. This occurrence may be attributed to the findings by the National institute of diabetes and digestive and kidney diseases (NIDDK), which cites that diabetes is a common reason for peripheral neuropathy in patients diagnosed with diabetes for not less than 25 years.

The characteristic symptoms of lesions of the femoral nerve are:

The musculus iliopsoas is the most important and strongest flexor of the hip joint. Without it, one cannot lift the leg or bend the trunk forward. Sitting up from a supine position would be impossible. Other flexors of the hip joint are the musculus sartorius as well as the musculus rectus femoris. In the case of lesions of the femoral nerve, the movements mentioned above cannot be executed anymore.

The musculus quadriceps femoris is solely an extensor of the knee joint. In the case of lesions of the femoral nerve, the muscle cannot be stretched actively anymore since the extensors fail to carry out their function.

The general symptoms that are indicative of femoral neuropathy may include a dull aching pain in the genital area, numbness in any part of the leg, muscle weakness of the lower extremity, feeling like the knee or leg is going to buckle, and difficulties in extending the knee as a result of weakness in the quadriceps.

Femoral nerve lesions can be diagnosed with clinical functionality tests through which the examiner can check the function of the musculus iliopsoas, the musculus sartorius, and the musculus rectus femoris.

The muscle test of the musculus iliopsoas starts with the patient being in a supine position with the leg rotated outwards in flexion and abduction of about 45°. The examiner places a hand firmly on the contralateral side of the pelvis for stabilizing the patient and prevents the patient from rolling over to the side of the tested muscle. The examiner reaches for the distal thigh with their other hand. The test is performed in the direction of extension and slight abduction. The patient pushes in the direction of flexion and adduction. Alternatively, the muscle test can be done while standing or sitting.

The most suitable position for testing the musculus sartorius is also in the supine position. However, it is possible to perform the test while seated.

In the example of the left leg, the examiner holds the knee from the outside with their right hand and the distal lower leg on the medial side, directly above the ankle joint with the left hand. Then, the patient’s leg is positioned in approx. 30°–45° abduction with maximal external rotation and slight flexion of the hip joint. The patient is in a position similar to the ‘Indian style sitting’. Afterwards, the examiner starts with the test pressure and the patient tenses against the pressure with maximal resistance.

For checking the flexors of the knee joint, the musculus rectus femoris and the musculus sartorius are optimally innervated. The test can also be performed in the supine position. However, the patient must let his legs hang down freely. During the test, the patient tenses these muscles and resists the temptation to inflect the lower leg at the knee.

Additional tests that help in the diagnosis of femoral neuropathy include the nerve conduction test, which checks the speed of electrical impulses of the nerve. Slow time for the transmission of electrical impulses through the nerves implies nerve damage. The electromyogram (EMG) test is performed as a follow-up test to the nerve conduction test, and it measures how well the muscle and nerves are working. In essence, EMG is suitable to assess whether the muscles respond appropriately during stimulation. 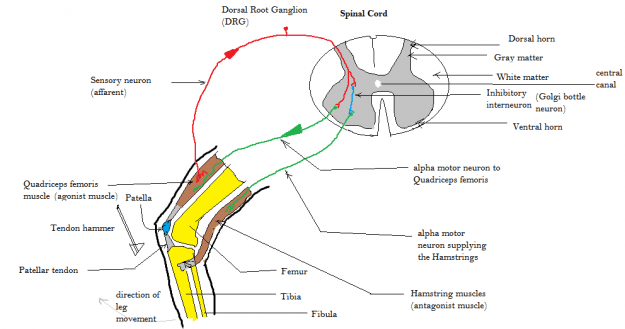 As already mentioned, the femoral nerve is a peripheral nerve that originates from the spinal cord segments L1 to L4. Root lesions of L3 and L4 can cause lumbar disc herniation, paresis of the quadriceps, weakened patellar reflex, and sensory disturbances at the flexor side of the thigh. Functional disorders of the adductors can be seen in root lesions in the areas L2 to L3. L4 lesions usually affect the musculus tibialis.

Pareses of the plexus lumbalis are usually easy to detect due to an extended attack of the muscles in the hip area. In dystrophin-associated myopathies, an isolated attack of the musculus quadriceps and a slowly progressing development that does not show any sensitivity disorders is observed.

In practice, the treatment of the femoral nerve is dependent on the etiology of the lesions. Surgical interventions are usually no alternatives for lesions of the femoral nerve. Diagnostic imaging of the nerve inside and outside the pelvis must be performed. As soon as the continuity of the nerve is interrupted, grafts must be used in almost all cases. Empirically, surgical treatments have an excellent prognosis. Additionally, physical therapy has emerged as a conservative treatment intervention. Other approaches may include avoidance of external rotation and excessive hip abduction and the use of a knee brace, which prevents the buckling of the knee. It is equally important to recommend neuropathic pain medications in cases of painful femoral neuropathy.