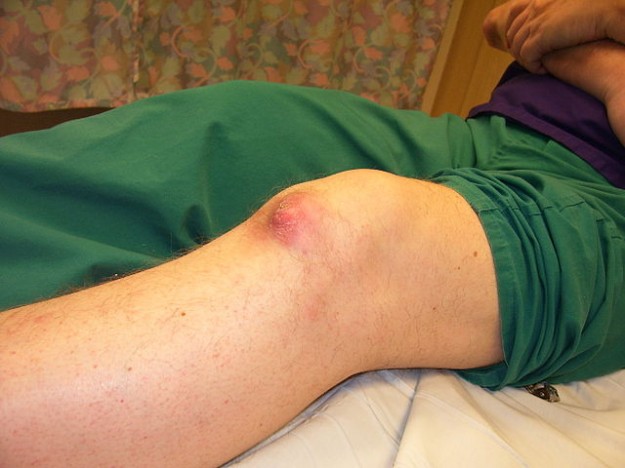 Anatomy of the Knee Joint 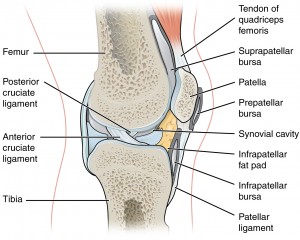 The knee is a complex joint made up of 3 articulations: the medial and lateral femorotibial joints and the patellofemoral joint. It is not a simple hinge joint because it has 6° of motion: flexion/extension, internal/external rotation, varus/valgus, compression/distraction, anterior/posterior translation, and medial/lateral translation. The normal range of knee movement is 10° extension to 130° flexion. 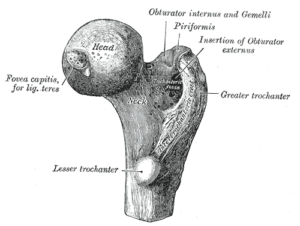 Medial and lateral condyles form the distal femur. Anteriorly, they are separated by the intercondylar notch. Posteriorly, they are separated by the intercondylar fossa. On the medial epicondyle, the adductor tubercle is the insertion point of the adductor magnus muscle. Both condyles are covered with hyaline articular cartilage. The trochlea is the surface that articulates with the patella.

The proximal tibia is made up of the medial and lateral condyles. Gerdy’s tubercle (iliotibial band insertion) is located on the lateral epicondyle. The tibial tuberosity or tibial tubercle, located anteriorly, is the point of insertion for the patellar tendon.

The tibial plateau is the tibial portion of the femorotibial joint. The articular surface is divided into a medial and a lateral facet. The facets have an oval shape. The medial facet is concave in both sagittal and coronal planes. The lateral facet is concave in the coronal plane and convex in the sagittal plane, and this is because as the knee flexes, the lateral femoral condyle slides posteriorly on the tibia, meaning the tibia rotates externally with knee flexion.

The patella is the largest sesamoid bone in the body. The proximal base is wider than the distal apex. It serves as a pulley for knee extension by reducing the movement arm and thereby decreasing the force needed for knee extension.

The retropatellar joint surface articulates with the femur. It is divided into a wide lateral and narrow medial facet. The lateral facet is concave and the medial facet can either be concave or convex.

Joint Capsule of the Knee

The joint capsule of the knee joint is wide and covers all involved osseous structures. It consists of the following layers: the synovial membrane and the fibrous membrane.

The synovial membrane inserts close to the bone-cartilage border of the femur and forms the suprapatellar recess. Tibial insertion points are located on the bone-cartilage border medially, laterally, and ventrally of the tibial plateau. From the medial and lateral facets, it runs ventrally and revolves around the intercondylar area. The cruciate ligaments are located in this region and are covered by the synovial membrane.

In contrast to the complex course of the synovial membrane, the fibrous membrane inserts in almost all areas of the knee joint. The few exceptions are the tibial plateau, the intercondylar area, and the lateral condyles.

This recess is very small and is not always present. It is formed between the lateral femoral bone-cartilage border and the lateral surfaces of the patella.

The capsular bulging between the heads of the gastrocnemius muscle and the femoral condyles is referred to as recessus subtendinea gastrocnemii or the pole caps.

The largest recess of the knee joint is formed by the joint capsule that lies ventrocranial to the patella and contains a superficial and a deep sheet. The deep sheet inserts at the proximal area of the patellar surface and runs cranially to turn back caudally above the base of the patella. Then, it is fixed at the base of the patella as the superficial sheet. This recess is located underneath the tendon of the rectus femoris muscle. This means that the 2 sheets of the recess glide against each other during contraction and stretching of the muscle. 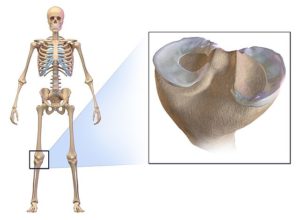 Image: Meniscus of the knee. By Andrewmeyerson, License: CC BY-SA 4.0

Menisci are C-shaped fibrocartilaginous wedges that are thick on the outside and thin on the inside. Their primary purpose is shock absorption. They are made of type I collagenous fibers and elastic fibers. They consist of 3 layers with each layer having its specific structure:

Both the lateral and medial menisci have their respective anterior and posterior horns, an inner section in the articular cavity, and a base.

The anterior horns of the menisci are anchored by the patellomeniscal ligaments and are connected to each other by the transverse ligament of the knee. The inner 2/3 of the menisci are supplied via diffusion of the synovial fluid.

The base of each meniscus is supplied by blood vessels that originate from the fibrous membrane. A special feature of the medial meniscus is that additional vessels radiate into it via the posterior medial collateral ligament. Anterior and posterior horns are vascularized via the meniscotibial ligament.

Ligamentous fixation of the medial meniscus

Ligamentous fixation of the lateral meniscus

During knee flexion, the menisci are pulled dorsally by the femoral condyles. The semimembranosus muscle (medial) and the popliteus muscle (lateral) synergize this gliding motion with their direct connection.

During extension, the femoral condyles push the menisci ventrally on the tibial plateau. The extent of the movement of the lateral meniscus is significantly greater than that of its medial counterpart.

Ligaments of the Knee Joint 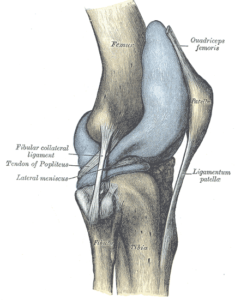 The ACL originates from the dorsal, inner lateral femoral condyle and inserts at the roof of the intercondylar fossa. It has 2 fiber bundles: the anteromedial and the posterolateral bundle.

The ACL stabilizes the knee joint preventing excess anterior translation of the tibia on the femur. It also limits the extension and rotation of the joint.

The PCL originates from the inner surface of the medial femoral condyle and inserts at the posterior intercondylar area of the tibia. The PCL also has 2 fiber bundles: the anterolateral and the posteromedial bundle.

The PCL prevents excess posterior translation of the tibia. It also limits the extension and internal rotation of the knee joint.

The patellar tendon runs from the apex of the patella to the tibial tuberosity and is the continuation of the quadriceps tendon. The superficial infrapatellar bursa lies between the ligament, the tibia, and the infrapatellar fat pad.

Innervation of the knee joint

Cruciate ligament rupture describes the partial or complete rupture of the anterior, posterior, or both cruciate ligaments. Usually, the rupture occurs from direct trauma to the knee or pivoting/buckling injury to the knee during sports resulting in anterior or posterior translational instability. Surgical reconstruction is the treatment of choice.

Dislocation of the patella

The patella usually dislocates laterally, and it can occur due to trauma or ligament laxity. Recurrent dislocation can result in patellofemoral arthritis. Common surgical treatments include medial patellofemoral ligament reconstruction and tibial tubercle osteotomy. 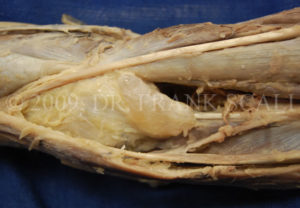 Image: A Baker’s cyst (popliteal cyst) is located behind the knee and is a swelling of the popliteal bursa. In this image, the Baker’s cyst is the yellowish tissue and was discovered during routine dissection. By Dr. Frank Scali, License: CC BY-SA 3.0

Baker’s cysts are common cysts that occur in the popliteal area. In cases of mild swelling, patients hardly notice any symptoms. If the accumulation of fluid increases due to continuous incorrect loading, sensitive structures can be compressed and cause either pain and impairment of movement or both. Baker’s cyst can be treated conservatively or with surgery. However, it has a high rate of recurrence.

There are 3 forms of meniscal injuries: degeneration, impingement, and tear. All 3 forms can occur in isolation or in combination with each other.

Tears can be classified based on their direction or location. Bucket handle tear is a special form of meniscus tear that develops longitudinally and can expand into the ventral direction resulting in a hole in the meniscus. The inner part, the so-called bucket handle, can dislocate and can additionally be tucked between bones at flexion or extension. If the meniscus injury progresses, removal of the damaged structure is often the only solution and involves surgery (meniscectomy). 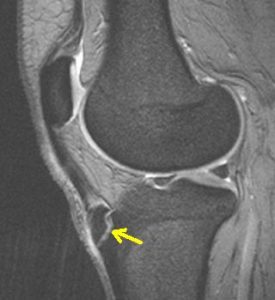 Osgood-Schlatter disease or simply Schlatter’s syndrome is aseptic bone necrosis in the area of the tuberosity of the tibia, which often affects teenage boys and children between the ages of 10 and 16. Patients experience severe pain, especially during climbing stairs or quick torsional movements, which are highly functional loads for the knee joint.