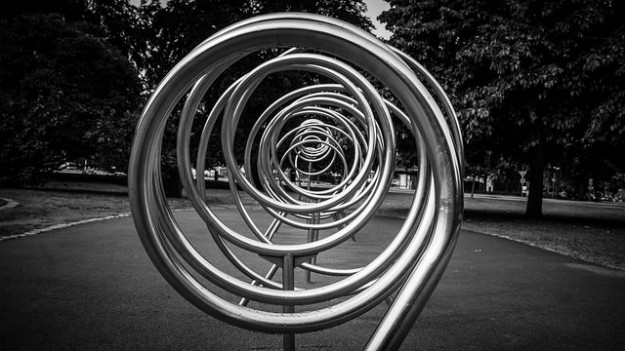 Types of Ketone Bodies and Their Function

Acetoacetate and beta-hydroxybutyrate are synthesized in the mitochondrial matrix of hepatocytes. Because they traverse membranes easily, the brain, myocardial muscles, and skeletal muscles all rely on the re-conversion of these substances when glucose levels are low. Since the brain cannot use fatty acids for energy generation because the blood-brain barrier is not permeable to fatty acids, it is dependent on ketone bodies as its sole energy resource during periods of fasting. Using ketone bodies, the brain can reduce its glucose demand from an average of approximately 150g/day to 50g/day. Ketone bodies are transported to the brain via monocarboxylate transporters 1 and 2.

Diabetes mellitus also causes an accumulation of acetyl-CoA: lowered insulin production or higher insulin resistance leads to an increase in the degradation of fatty acids which, in turn, leads to more acetyl-CoA being produced. Acetyl-CoA can only enter the citric acid cycle if there is enough oxaloacetate available for the 1st reaction in that cycle; however, in diabetes mellitus, the absorption of glucose from the blood into the cell is inhibited, leading to reduced activity of glycolysis and thus reduced production of pyruvate and oxaloacetate.

This means that patients with diabetes have increased amounts of acetyl-CoA and a simultaneous deficiency of oxaloacetate, resulting in an intensified synthesis of ketone bodies via the acetyl CoA and HMG-CoA pathways. As well, there is an attempt to increase the amount of oxaloacetate for the Krebs cycle via deaminated amino acids that are ketogenic, such as leucine. The synthesis of ketone bodies takes place mainly in the hepatocytic mitochondria.

Acetyl-CoA is the product of various metabolic pathways:

Initially, 2 acetyl-CoA are condensed to form acetoacetyl-CoA, catalyzed by the enzyme thiolase. In this step, 1 CoA is cleaved, thereby providing enough energy for the synthesis of the product.

The next step, which is catalyzed by β-hydroxy-β-methylglutaryl-CoA synthase (HMG-CoA synthase), uses water to add another molecule of acetyl-CoA to the beta carbon of the acetoacetyl-CoA.

This step produces β-hydroxy-β-methylglutaryl-coenzyme A (HMG-CoA), which is a branched 6-carbon compound and an intermediate in the synthesis of cholesterol in the cytosol.

One acetyl-CoA is cleaved by HMG-CoA lyase, producing acetoacetate.

Beta-hydroxybutyrate is the ketone body with the highest blood concentration during periods of fasting or starvation. The figure below summarizes ketogenesis reactions. 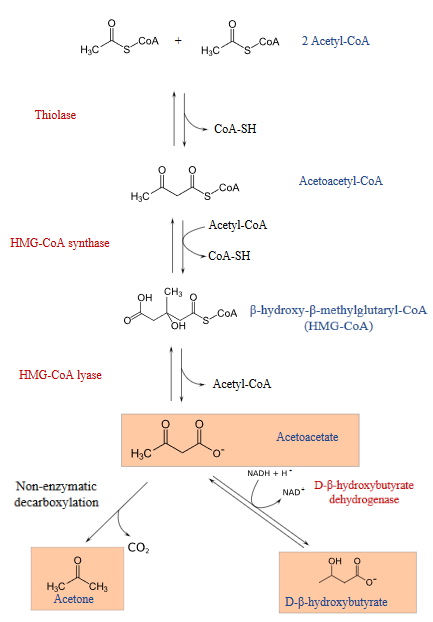 The ketone bodies that have now been formed travel through the bloodstream toward their target tissue. The brain utilizes ketone bodies with the assistance of monocarboxylate transporters (MCTs).

These transporters are located, for example, in the plasma membrane of endothelial cells of astrocytes and neurons; they also organize the transport of lactate, which can be reduced to pyruvate. Uptake occurs through proton symport.

Ketone bodies can be utilized in the entire body (especially the brain) except for the liver, since this organ functions exclusively as a site of synthesis.

In step 2, acetoacetate is then activated to acetoacetyl-COA through 1 of 2 mechanisms:

In the final step, acetoacetyl-CoA is cleaved by thiolase with the use of 1 CoA to form 2 acetyl-CoA.

Acetyl-CoA is now available for energy production in the citric acid cycle and for the synthesis of necessary reducing equivalents to keep the respiratory chain running.

A blood pH level < 7.35 is referred to as acidosis. Ketoacidosis is an acidosis caused by high blood concentrations of ketone bodies.

All 3 types of ketone bodies are acidic; i.e., they can cause a reduction in blood pH, giving rise to acidosis. This is why we can develop ketoacidosis during periods of fasting.

Barker, S. B. (1936). The effects of increased metabolism on the ketone body excretion of depancreatized dogs.