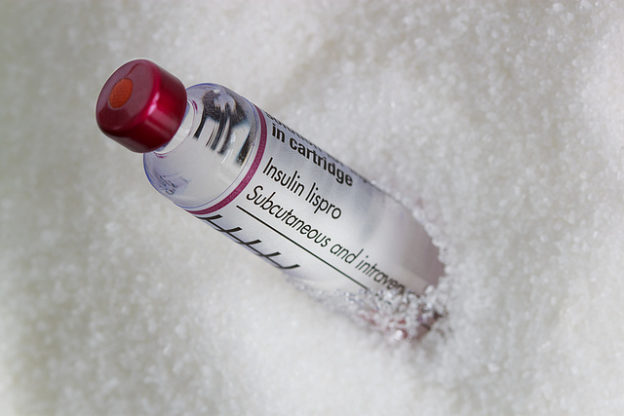 Image: “The Balancing Act of the Diabetic” by
Sprogz
. License: CC BY 2.0

Definition of Type 1 Diabetes in Children

Diabetes is a common chronic disease that is characterized by hyperglycemia and other metabolic abnormalities. In children and adolescents, one variant of the disease is common — type 1 diabetes mellitus or juvenile diabetes.

Epidemiology of Type 1 Diabetes in Children

Type 1 diabetes accounts for 10% of all diabetes cases. It may present at any age, but the mean age of presentation is 7–15 years. More than half of patients with type 1 diabetes are under 20 years of age. However, a quarter of these patients are adults.

Juvenile is a genetic disease and children of parents with type 1 diabetes have a 30% chance of developing juvenile diabetes. The disease has a slight male predilection.

Classification of Type 1 Diabetes in Children

The presentation of juvenile diabetes can take various forms which give rise to the various classes of the disease. The natural stage-wise progress of the disease is outlined as follows:

Etiology of Type 1 Diabetes in Children

Diabetes type 1 is a genetic disease influenced by environmental factors such as viral infections, immunizations, psychological stress, dietary factors such as exposure to allergen-containing cow milk, and perinatal factors that increase the risk of type 1 diabetes. Dizygotic twins have a 5% concordance rate which increases to 50% in monozygotic twins.

Other rare causes of the disease include the congenital absence of the pancreas or removal during surgery, in addition to syndromes that occur in association with a compromised pancreatic function such as Wolfram syndrome, which is characterized by diabetes, optic atrophy, and deafness.

Pathophysiology of Type 1 Diabetes in Children

The main defect seen in the disease is pancreatic cell destruction from autoimmune antibodies which target the islet β-cells that secrete insulin.

The destruction of pancreatic β-cells is caused by the following:

Initially, the damage is minimal and is not clinically evident. The pancreas responds by regenerating new islet cells and there is a reduced need for insulin, a stage known as the ‘honeymoon phase’. However, damage of ≥ 80% manifests with the signs and symptoms of juvenile diabetes. The destruction could take as little as 3 years in young children or up to 10 years in adolescents.

Insulin is important in the regulation of plasma glucose levels, and the depletion of insulin triggers the conversion of stored glycogen into glucose, causing hyperglycemia.

Juvenile diabetes is commonly discovered when a child suffers from ketoacidosis. The mechanism of ketoacidosis involves the following:

Loss of glucose in urine and the inability of the cells to utilize glucose due to insulin deficiency cause a state of starvation in the body. When the body detects this depletion in glucose levels, hormonal compensatory mechanisms are triggered and increase catabolism by accelerating lipolysis and lipogenesis. There is an increase in the plasma concentration of free fatty acids, lipids, and triglycerides. They are readily converted into ketone bodies such as acetoacetate and β-hydroxybutyrate which cause ketoacidosis and ketonuria.

Respiratory compensation to combat the metabolic acidosis sets in and the patient begins to take deep rapid breaths. The breath has a characteristic acetone smell due to the non-enzymatic conversion of acetoacetate to acetone. With the respiratory compromise, hypovolemia due to osmotic diuresis, and plasmatic hyperglycemia, the brain has compromised perfusion and patients may become comatose or even die.

Juvenile diabetes may present in any of the following forms:

The body’s effort to reverse the hyperglycemia without acidosis causes polyuria, polydipsia, and weight loss despite an increase in appetite (polyphagia).

Polyuria occurs when serum glucose concentration exceeds the renal threshold for glucose loss via urine. The body responds by increasing urinary glucose excretion; the body achieves this by increasing both the concentration of urine and frequency of urination. Polyuria may present as nocturia, enuresis, or daytime incontinence in a previous continent child. In children who are not toilet trained, parents may note an increased frequency of wet diapers and/or diapers that are unusually wet.

Increased serum osmolality from hyperglycemia and hypovolemia leads to a demand for more fluid intake (polydipsia).

Increased catabolism of stored glucose due to insulin deficiency gives the body an impression of low glucose supply; therefore, there is increased intake. However, increased fat breakdown and the loss of glucose in urine occur resulting in weight loss. This is known as polyphagia.

Some children may also present with diabetic ketoacidosis

If diabetic ketoacidosis is not controlled in its early stages, it could lead to the following:

Investigations of Type 1 Diabetes in Children

To make a diagnosis of juvenile diabetes, a patient must fulfill the general diagnostic criteria for diabetes, which entail the identification of any 2 of the following findings:

Once a diagnosis of diabetes is made, other tests are conducted to differentiate the various types of diabetes.

Investigations to help both in management and in ruling out differential diagnosis:

Treatment of Type 1 Diabetes in Children

The most important intervention in the management of juvenile diabetes is insulin therapy since there is no endogenous production of insulin.

However, this form of therapy must be administered in conjunction with other supportive measures to maximize the benefits of exogenous insulin with minimum doses. These measures include:

Complications of Type 1 Diabetes in Children

Complications of diabetes can be divided into short-term and long-term complications.

Common causes of hypoglycemia include the erratic use of higher doses of insulin, poor oral intake, or other processes that reduce the body’s glucose or its demand for insulin. Intake of a fast-acting carbohydrate such as glucose, fruit juice, or candy (15 g) treats hypoglycemia.

This occurs when blood sugar rises to extreme levels but ketoacidosis has not yet set in. A hyperosmolar hyperglycemic state arises because of the administration of low doses of insulin or infection which could raise the demand for insulin within the body. Common manifestations include increased urination, thirst, fatigue, and difficulty concentrating. A revision of insulin dose is needed in most cases. A hyperosmolar hyperglycemic state is more common in adults and the elderly.

Cellular starvation of energy leads to lipolysis and conversion into ketone bodies which causes nausea, vomiting, abdominal pain, and the fruity smell of acetone. Inpatient management with vigorous fluid infusion and insulin administration is required. The condition is associated with high mortality due to cerebral edema especially if sodium bicarbonate was used in treatment.

This is a late complication of juvenile diabetes after long periods of the disease. Consistently elevated blood sugar levels lead to the glycation of lens proteins. Other changes that impair vision are the damage to the small vessels that supply the retina and revascularization with new weaker vessels that rupture easily.

Damage to the small arteries that supply the peripheral nerves leads to reduced sensation and damage to these nerves. The loss of sensation predisposes the patients to skin injuries that rarely heal due to high blood sugar levels that support microbial growth.

The recent literature has shown that peripheral neuropathy in type 1 diabetes might also result from toxic end-products of glycation due to hyperglycemia.

The effects of hyperglycemia on the central nervous system include impaired blood-brain-barrier permeability and impaired function of the visual cortical pathways. These can result in impairments in color vision and contrast-detection long before the development of the first signs of diabetic retinopathy.

Hypoglycemic episodes, which are more common in type 1 diabetes, also have an adverse effect on higher cortical functions. Recent studies show a correlation between the rate and severity of hypoglycemic episodes and the onset of mild cognitive impairment.

Course and Prognosis of Type 1 Diabetes in Children

Type I diabetes is a chronic disease that is well managed by the lifelong administration of insulin. The disease, however, if not properly managed, increases the body’s demand for insulin to a very high level. This predisposes the body to the development of complications, shortening a person’s life by about 10 years compared to a normal person.

Children diagnosed with the disease have an altered growth pattern, although they eventually attain the recommended height and weight for age.