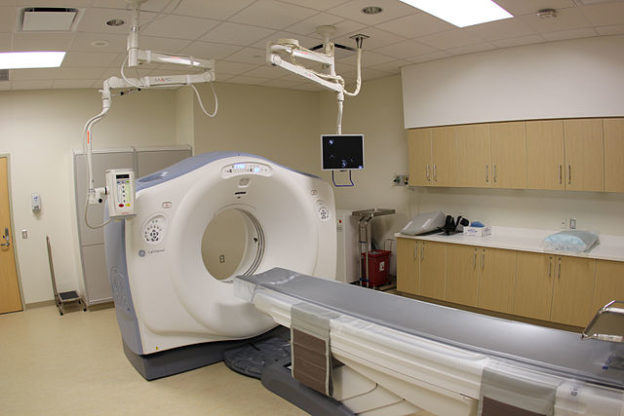 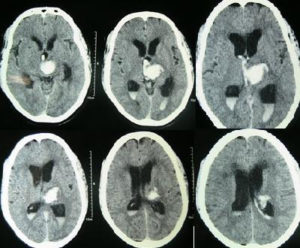 Image: Representative pre-operative CT scan of a patient showing a thalamic hemorrhage with associated hydrocephalus and blood in the 3rd and both lateral ventricles. By: Yadav YR, et al. License: CC BY 2.0

Pre-term delivery is associated with several complications that can be life-threatening or cause long-term disability and sequelae in the patient. Periventricular and intraventricular hemorrhage is a commonly acquired lesion of the central nervous system that specifically affects premature infants. 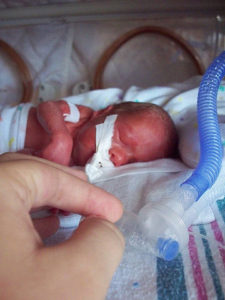 Image: An intubated female premature infant born at 26 weeks and 6 days’ gestation, and weighing 990 grams. Photo was taken at approximately 24 hours after birth. By: ceejayoz; http://www.flickr.com/photos/ceejayoz/3579010939/. License: CC BY 2.0

The most important risk factors for intraventricular hemorrhage in newborns are very low birth weight and delivery at a gestational age of less than 35 weeks. The estimated incidence can range from 20%–50%.

Intraventricular hemorrhage in premature infants is associated with significant mortality, with an estimated rate that can be as high as 50%. The most important risk factor for increased mortality is the extent of hemorrhage. Patients with low-grade hemorrhage have the lowest mortality rate, at approximately 5%.

Intraventricular hemorrhage originates from a capillary network that supplies the subependymal germinal matrix.

After 32 weeks, the subependymal germinal matrix has almost completely regressed, which is why intraventricular hemorrhage is much more common in premature newborns born before 32 weeks of gestation.

Grade III hemorrhage is associated with ventricular enlargement. Grade IV hemorrhage involves the cerebral parenchyma and is not confined to the subependymal and germinal matrix. 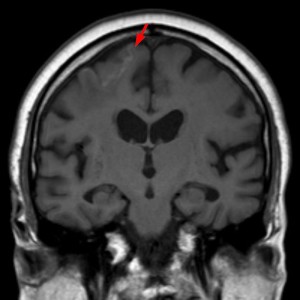 This mechanism of impaired autoregulation and increased cerebral blood perfusion in the fragile capillaries of the germinal matrix is thought to be responsible for grades I, II, and III hemorrhages. Grade IV hemorrhage is caused by cerebral infarction due to increased venous pressure.

The most likely cause of increased cerebral venous pressure is the ongoing hemorrhage from the germinal matrix into the lateral ventricles and the enlargement of the ventricles, which can cause venous engorgement (see image). The term periventricular hemorrhagic infarction can be used interchangeably with grade IV hemorrhage.

Due to the destruction of the motor tracts by the hemorrhagic incident, infants who survive usually have cerebral palsy. The involvement of the cortex can result in seizures and/or cognitive impairments.

Premature babies usually present as ill and therefore intraventricular hemorrhage is rarely associated with any significant changes in the clinical picture of the infant.

Due to the relatively large ratio of the head to the body of the infant and the ability of the head to expand, infants with intraventricular hemorrhage may develop symptoms and signs of anemia. Pallor, increased capillary refill time, or shock can be observed.

Infants with severe intraventricular hemorrhage may also develop metabolic or respiratory acidosis, apnea, hypotonia, and stupor, and may go into a coma. The fontanels are usually full and firm to palpation due to the increased intracranial pressure. Seizures occur in a minority of patients. Children with grades III and IV hemorrhage may die, and therefore the diagnosis can only be confirmed on autopsy.

Imaging studies are the mainstay diagnostic tool for the screening, confirmation, and follow-up of intraventricular hemorrhage. Premature newborns, especially if born at less than 30 weeks of gestation, should undergo cranial ultrasonography at the age of 1 week post-natally. Cranial ultrasonography should be repeated at 36–40 weeks’ postmenstrual age in all premature babies. 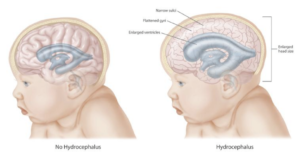 Image: An infant with hydrocephalus (left), and a healthy infant’s brain (right). By: Centers for Disease Control and Prevention. License: Public domain.

If at any point the diagnosis of intraventricular hemorrhage is confirmed by cranial ultrasonography, follow-up serial ultrasonographies are indicated and should be repeated on a weekly basis. They are used to detect the progression of hemorrhage and the development of post-hemorrhagic hydrocephalus (see image).

Computed tomography scanning and magnetic resonance imaging have a limited role in the diagnosis of intraventricular hemorrhage because of the excellent sensitivity and specificity of cranial ultrasonography.

Infants with intraventricular hemorrhage may have hemorrhagic shock, metabolic disturbances, and/or respiratory distress; therefore, cardiovascular and respiratory support are indicated.

Anemia and metabolic acidosis can occur in infants with severe intraventricular hemorrhage. In these patients, acute correction of anemia with blood transfusions may be indicated. Serial lumbar puncture has been shown to be ineffective in the prevention of progressive hydrocephalus.

Infants who develop late or progressive hydrocephalus should receive acetazolamide to decrease the production of cerebrospinal fluid. Post-hemorrhagic hydrocephalus may require a ventriculoperitoneal or ventriculosubgaleal shunt placement.

Indomethacin prophylaxis has been shown to improve the cognitive profile of infants who develop intraventricular hemorrhage, especially males, but not motor function outcome. This effect was preserved and still able to be observed until the children were school-aged.