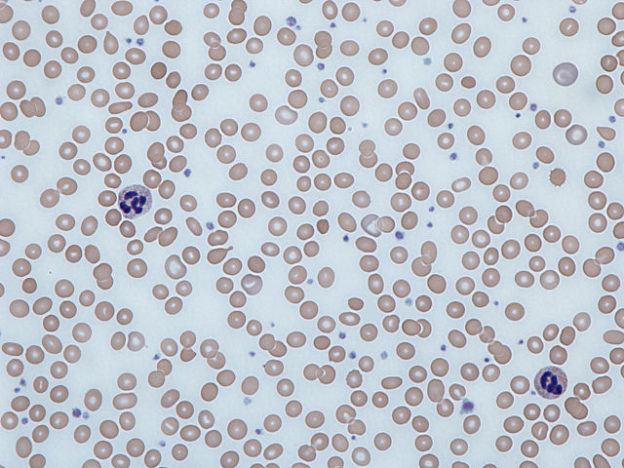 Anemia occurs when the blood hemoglobin (Hb) level is below the reference range for the age and sex of the individual according to the World Health Organization’s (WHO’s) lower limits for Hb. Iron-deficiency anemia (IDA) develops when there is an insufficient amount of iron for hemoglobin synthesis. Despite medical advances in diagnosing and managing iron deficiency at a relatively low cost, pediatric IDA remains the most common anemia and nutritional disorder across the globe, but it is more prevalent in developing countries.

WHO guidelines for the lower limit of Hb:

According to a report published in 2009, approximately 1.6 billion people throughout the world are anemic, and several million of these have IDA. The prevalence of anemia is unevenly distributed: it is more prevalent in developing countries than in developed countries.

In developing countries, according to the WHO, 30% of children up to 4 years of age have IDA, and 48% of children ages 5–14 years are anemic. In developed countries, 30%–40% of anemia cases involve IDA in preschool children. In the United States, there are approximately 5 million people with IDA.

In infants younger than 6 months

Because iron is stored during the prenatal period to provide for an infant’s needs in the first 6 months after birth, IDA develops in infants younger than 6 months due to low birth weight and perinatal blood loss/hemorrhage.

In children aged between 6—24 months

After 6 months, due to rapid growth, sufficient iron is needed to meet the needs of the body. In this period, nutritional iron deficiency is common. Cow’s milk leads to gastrointestinal losses of iron and, therefore, is another factor.

In children older than 24 months (2 years)

A major cause of IDA in children older than 24 months is chronic blood loss (ancylostomiasis). This might be due to peptic ulcers, Meckel’s diverticulum, or inflammatory bowel disease.

This stage is marked by the depletion or absence of iron stores alongside normal serum iron concentration, hemoglobin, and hematocrit. There are reduced or absent bone marrow iron stores and reduced serum ferritin level.

The characteristic feature of this stage is that there is reduced serum iron and transferrin saturation. In addition, there are reduced iron stores, but hemoglobin and hematocrit values are normal.

This stage is characterized by frank features of IDA in which there are depleted iron stores, depleted serum iron, and transferrin saturation, as well as reduced levels of hemoglobin and hematocrit and associated symptoms.

All of these stages are overlapping, and there are no clear-cut boundaries between them. Moreover, laboratory values change over time with iron deficiency; therefore, they should be evaluated meticulously.

The only source of iron during the prenatal period is through the placenta. In the last stage of pregnancy, the aggregate sum of iron in the fetus is 75 mg/kg. The level of iron in breast milk is highest during the first month after birth, and the absorption of iron from breast milk is approximately 50%. Although this absorption rate is high, it is still inadequate for the infant’s growth rate; therefore, iron is extracted from the iron stores to meet the infant’s needs.

In infants with normal weight, the iron stores are sufficient for 6 months after birth. However, the iron stores of infants with low birth weight or blood loss can be depleted before 6 months. This eventually leads to IDA. Consumption of cow’s milk and solid foods that lack adequate iron can further worsen the condition because they disrupt the absorption of iron through the intestinal mucosa.

In older children, IDA is usually caused by an underlying chronic gastrointestinal disruption, such as peptic ulcers, polyps, or inflammatory bowel disease.

Symptoms appear in children with severe cases of IDA and can involve the skin, musculoskeletal system, cardiovascular system, nervous system, and gastrointestinal system.

Note: Pallor, fatigue, irritability, anorexia, diarrhea, and weakness are common symptoms of IDA in children. Unhappiness, a lack of cooperation, and shorter attention span might lead to low scores on Bayley’s Infant Behavior Record (IBR) and Mental Development Index (MDI). However, both IBR and MDI scores will return to normal ranges once the iron deficiency is corrected.

IDA is diagnosed on the basis of microcytic hypochromic anemia, reduced body/serum iron, anisocytosis, and poikilocytosis. In severe cases, hemoglobin might be as low as 3–4 g/dL.

The following investigations are significant in making a diagnosis:

Differential diagnosis of IDA in children should include other similar blood disorders and microcytic hypochromic anemia. These include beta-thalassemia minor, anemia of lead poisoning, and anemia accompanying chronic inflammations or infections.

Anemia of chronic inflammation or infection

In anemia of chronic inflammation, serum level is low, iron-binding capacity is normal, and serum ferritin level is normal or raised. Anemia accompanying infections must be excluded by screening tests for infections.

However, potential adverse effects could occur in the form of nausea, vomiting, diarrhea, constipation, and epigastric pain. Even the recommended dose can cause adverse effects, in which case readjustment of the dose becomes essential.

Note: Optimal absorption of iron occurs when the iron is administered between meals. Simultaneous administration of vitamin C has been shown to increase its absorption. On the contrary, diets rich in phytates and phosphates, such as cereals and milk, respectively, decrease iron absorption from the gut.

Duration of iron therapy usually ranges from 3 to 6 months. Hemoglobin levels are expected to rise approximately 0.4 g/dL/day with therapy.

Factors involving in poor response to oral iron include the following:

Parenteral route of administering iron is indicative in the following conditions:

However, some pediatricians prefer to start with parenteral iron administration. They might administer a few initial injections and then prescribe oral medication to prevent difficulties in treatment.

Parenteral iron can be administered intramuscularly (IM) or intravenously (IV).

Note: The following formula can be used to calculate the total dose:

Here, HB deficit is the difference between the present and required values of Hb. Moreover, an additional 20%–30% of the calculated dose is administered to refill the iron stores.

Iron dextran complex (Imferon) or iron-sorbitol (Jectofer) can be considered for IM administration. A daily dose of IM injection should not exceed 5 mg/kg, i.e. 50 mg in infants and 100 mg in adolescents.

A suitable site for IM injection is the upper and outer quadrant of the thigh. To prevent a repeated injection at the previous site, it is recommended that the injection be administered in a Z pattern.

Iron-dextran complex (Imferon) or iron-sucrose injection (Venofer) can be considered for IV administration. Initially, a test dose is given to assess the sensitivity. After that, the total dose infusion (TDI) is given accordingly.

A blood transfusion should be used in critical and life-threatening conditions of severe anemia when a rapid rise in hemoglobin level is required.