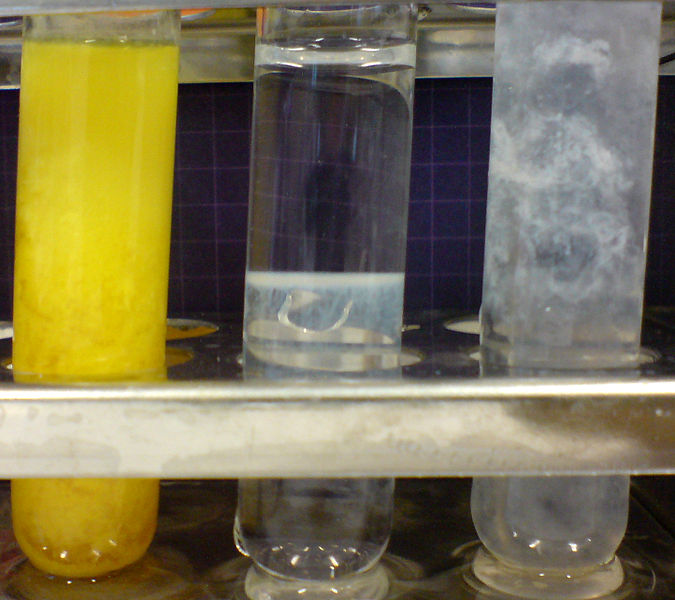 Concentrations of solutions may be expressed in different forms. These include molarity, molality, % weight/volume, % weight/weight, % volume/volume, normality, titer, and much more. The most common concentration quantity for the ionic solution is the molarity. Molarity is expressed as the number of moles of solute per L of the solution. For example, to compute for the concentration of a sodium chloride solution that is prepared by dissolving 1 g of NaCl in 1.00 L of the solution, the following equation will be used.

Each atom that participates in an oxidation-reduction reaction is assigned an oxidation number that reflects its ability to acquire, donate or share electrons.

Redox is a short-hand notation for reduction-oxidation. These reactions are named Redox reactions because the reaction involves two simultaneous steps which are reduction and oxidation reaction. These are reactions wherein electron transfer is involved between two chemical species. In the process, one of the reactants loses electrons, while the other species gain the electron. The charge is also conserved in the process.

Oxidation state, or number, is the total number of electrons that an atom has gained or has lost to form a chemical bond. Each atom participating in an oxidation-reduction reaction is assigned an oxidation state to determine the ability of each atom to accept, donate or share electrons. Changes in the oxidation states of the atom will reflect whether those atoms were reduced or oxidized in the process. Some general rules for assigning oxidation states are listed below.

Like any reactions, redox reactions follow the law of conservation of matter but aside from balancing the elements, overall charges in the reaction are also to be balanced. Balancing redox reactions may be achieved using the steps described below. As an example, consider the reaction of the permanganate ion, MnO4–, and sulfurous acid, H2SO3.

1. The reaction will be divided into 2 half-reactions. To identify the half-reactions, you just need to look at the atoms which changed oxidation states in the reaction.

2. The next step is to balance the atoms beside H and O. Most of the time, these atoms are the ones oxidized or reduced. Since, in the example, there are no differences in the O and H atoms, the half-reactions are retained.

3. The O atoms are then balanced by adding water in either the reactant or the product side.

4. After balancing the O atoms, in most cases, there will be an excess of H-atom on one side. The H atoms are then balanced by adding H+ to either side of the reaction.

5. By this time, it will be noticed that the charges of the half-reactions are not balanced. The next step then is to balance the charges by adding electrons to either side of the reactions.

6. The next step is to add the two half-reactions to get the over-all balanced redox reaction. Since an electron product cannot be yielded in a reaction, each half-reaction will be multiplied by a certain factor so that the electrons will be balanced.

8. In a basic medium, the H+ ions are completely neutralized by adding OH- on both sides of the reaction. The OH- combined with the H+ will produce water.

Sometimes, there is a need to write the Net Ionic Equation (NIE) of a reaction. NIE involves showing the predominant form of a substance when it is in contact with water. For example, a completely soluble salt like NaCl will not exist as solid NaCl in a reaction with water as a solvent. Instead, it will be represented as its ions Na+, and Cl–. Using the NIE, we can emphasize how the precipitates are formed in a reaction.

For example, let us consider the reaction of an aqueous solution of KI and AgNO3. Based on the solubility rules, both compounds are soluble in water. This means both compounds dissociate in water to produce their ionic components. As soon as a drop of KI is added to the AgNO3 solution, a yellow precipitate was formed.

Following the solubility rules, it will only be the AgCl product that will stay as a solid as it is insoluble in water. Using the total ionic equation for the reaction, we can emphasize that it is only the AgCl that is insoluble in our reaction system.

As you can see, there are ions that are present in both the reactant and product sides. These ions are called spectator ions and are canceled to obtain the net ionic equation.

Imagine a 1.00 L sample of polluted water was analyzed for lead(II) ion, Pb2+ , by adding an excess of sodium sulfate to it. The mass of lead(II) sulfate that precipitated was 229.8 mg.

What is the mass of lead in a liter of water? Express the answer as mg of lead per liter of solution.

First, we must obtain the mass percentage of lead in lead(II) sulfate, by dividing the molar mass of lead by the loar mass of PbSO4, then multiplying by 100.

The, calculate the amount of lead in the PbSO4 precipitated.