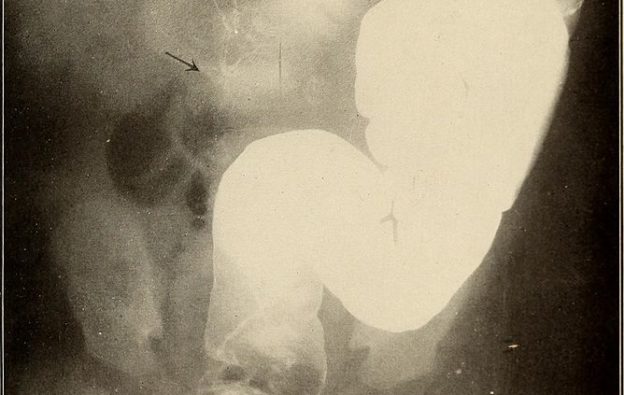 Definition and Epidemiology of Pediatric Intussusception

Intussusception occurs when a distal segment of bowel telescopes into the lumen of a proximal bowel, causing bowel obstruction. Intussusception can occur at any age; however, it is most common in infants between 3 and 18 months of age. It rarely occurs in neonates. Males are more commonly affected with a male to female ratio of 3:1.

Intussusception is the most common cause of bowel obstruction in children between 3 months of age and 6 years of age.

In about 90% of cases of intussusception in children, the cause is idiopathic. In 2-8% of cases, an underlying structural cause is identified, so-called “lead points,” such as a Meckel diverticulum, neurofibroma, intestinal polyp, hemangioma or a malignancy such as lymphoma. Lead points are more commonly a cause in older children presenting with intussusception.

A proposed etiologic mechanism is a gastrointestinal infection or new food proteins that lead to inflammation of Peyer patches in the terminal ileum. Other risk factors include lymphoid hyperplasia and cystic fibrosis.

There is also an association between respiratory adenovirus infection and intussusception. Various conditions may also be complicated by intussusception, such as gastroenteritis, otitis media, upper respiratory tract infections and Henoch-Schonlein purpura.

Pathology and Pathophysiology of Pediatric Intussusception

Intussusception most commonly occurs in the ileocolic region of the bowel. Less common forms of intussusception are cecocolic and, rarely, ileoileal. In very rare cases, the appendix may serve as the apex of an intussusception. 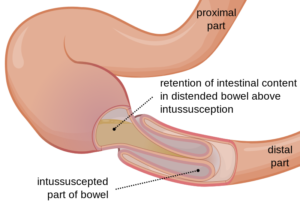 The intussusceptum pulls its mesentery along into the distal lumen with it. The mesentery is constricted and this leads to obstruction of venous return. The intussusceptum becomes engorged with the development of edema.
The mucosa bleeds and this results in blood stool, which may also contain mucus (“red currant jelly” stool). Intussusception can eventually result in gangrene of the bowel and shock. Strangulation usually occurs after 24 hours.
In some cases of intussusception, the apex may extend further into the transverse, descending or sigmoid colon. In neglected cases, the apex of the intussusception may even descend through the anus.

Symptoms and Signs of Pediatric Intussusception

Infants with intussusception experience an abrupt onset of intermittent attacks of colicky abdominal pain and screaming. During these episodes, they become pale and may draw up their legs. These episodes of pain usually last for 2 to 3 minutes and occur intermittently about every 10 to 20 minutes.

Later, the pain becomes more persistent. In between episodes, the infant may appear comfortable and well but, as the intussusception progresses, the infant starts to become lethargic and weak. Lethargy may be a more prominent feature than abdominal signs in some infants.

Other symptoms include vomiting, which is the most common accompanying symptom and occurs early on. Later, the vomiting becomes bilious. Infants may also initially pass a small number of loose stools; this is an early feature of bowel obstruction, with the emptying of the bowel distal to the point of obstruction. Subsequently, small amounts of stool may be passed or more commonly, obstipation develops, with no passage of stool and flatus.

Per rectal bleeding generally occurs in the first 12 hours. Intussusception is also classically associated with redcurrant jelly stools, but this is a late feature. This refers to stool containing mucus and blood.

Infants may appear pale, lethargic and unwell. There may be a sausage-shaped mass palpable, or even visible, in the abdomen. The mass is slightly tender and is usually present in the right or left upper quadrants. However, when the abdomen becomes distended, this may be more difficult to appreciate. Rectal examination may reveal PR bleeding or a mass.

The classic triad suggestive of intussusception includes abdominal pain, a sausage-shaped abdominal mass, and redcurrant jelly stool. However, this is only present in a small number of cases (<15%).

The diagnosis of intussusception is based on a combination of clinical findings and imaging.

A plain abdominal X-ray may be normal or reveal a density in the region of the intussusception. It may also show features of bowel obstruction, and is helpful in excluding bowel perforation.

An abdominal ultrasound is often the most helpful diagnostic test in cases of intussusception. Longitudinal views reveal a tubular mass, while transverse views show a target appearance.

When there is clinical suspicion or evidence on ultrasound of intussusception, an air enema is performed for diagnostic and therapeutic purposes. Alternatives include a hydrostatic (saline), water-soluble contrast or barium enema.
Clinical pictures similar to intussusception: 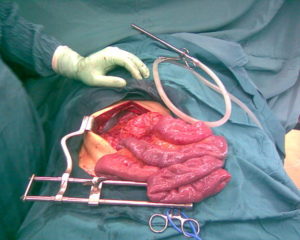 Volvulus (another cause of small bowel obstruction, when the bowel becomes twisted, and in infants, this can be secondary to malrotation).

Strangulated inguinal hernia (also another cause of small bowel obstruction; on examination, the groin has a tender irreducible lump).

Gastroenteritis (the presence of loose stools may resemble gastroenteritis, but the key distinguishing feature is the volume and persistence of diarrhea).

Colic (the infant is found to be healthy and thriving, with a normal exam).

If an enema is unsuccessful, surgery is indicated. Surgery is also carried out in cases of a suspected necrotic bowel, suggested by features such as peritonitis and septicemia.

Progression and Prognosis of Pediatric Intussusception

Some cases of intussusception spontaneously reduce. However, most untreated cases ultimately result in death. Intussusception progresses to bowel infarction and can result in bowel perforation and peritonitis.

The recurrence rate following reduction with an air enema is about 9%.