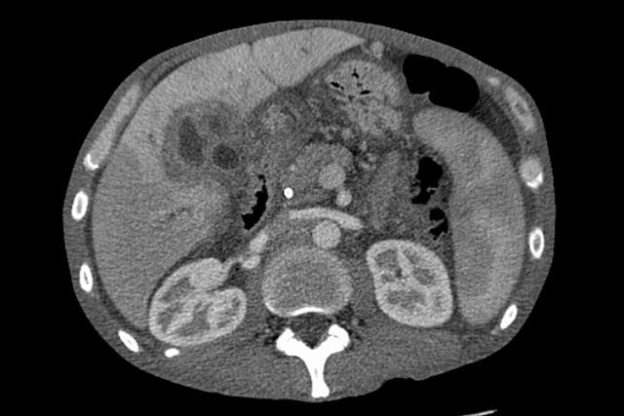 The biliary tree is made up of channels that collect bile from the hepatic parenchyma and transport it to the duodenum. It is divided into the intrahepatic and extrahepatic ducts.

The clinical organization in most of the population is as follows:

The biliary tract can be injured in abdominal trauma but this is usually rare. The estimated prevalence of biliary tract injuries in patients who sustain a significant blunt hepatic trauma is around 2.8%.

The risk of intrahepatic biliary system injury seems to be unrelated to the severity of a hepatic parenchymal injury or the American Association for Surgery of Trauma liver injury grade.

This is the imaging modality of choice in trauma set-ups. A patient with a blunt abdominal trauma usually undergoes a multidetector computed tomography scan of the abdomen to look for solid organ injuries and grade such injuries. When there is evidence of hepatic parenchymal injury, the risk of intrahepatic biliary system injury and leak becomes higher. Unfortunately, the computed tomography findings in patients with biliary injuries are usually non-specific.

Ultrasonography can also be used in the evaluation of the traumatic liver and intrahepatic biliary system. The main goal of ultrasonography is to evaluate the progress and evolution of a biloma rather than to exclude or grade hepatic injuries. Ultrasound-guided drainage of the biloma might be performed if the collection is growing.

The most sensitive and specific imaging modality for intrahepatic biliary system traumatic injuries and leaks is magnetic resonance cholangiopancreatography with a hepatobiliary contrast. The images produced with this technique can help in evaluating the anatomy of the biliary tract from the intrahepatic part to the gallbladder to the extrahepatic part and intrapancreatic portion.

Intrahepatic cholangiocarcinoma arises from the intrahepatic portion of the biliary tract and is considered as the second most common intrahepatic primary tumor. They arise from the biliary epithelium of mucin-producing cells, known as cylindrical cells, which are found within the segmental bile ducts or from cuboidal cholangiocytes which do not produce mucin.

These tumors are very invasive and usually have areas of necrosis, fibrosis, and mucin on histopathology. Intrahepatic cholangiocarcinoma can spread via the biliary system, venous system or lymphatic system.

The clinical presentation of intrahepatic cholangiocarcinoma is non-specific and consists of:

The main imaging modalities used in the radiographic evaluation of intrahepatic cholangiocarcinoma are ultrasonography, computed tomography, magnetic resonance imaging, and positron emission tomography. Each imaging modality has its own strong points, weaknesses, and indications.

Ultrasonography is usually the first imaging modality used in any patient complaining of non-specific abdominal symptoms such as pain and indigestion.

Intrahepatic cholangiocarcinoma can be infiltrative and they usually do not have a capsule which can differentiate them from hepatocellular carcinoma. The lesions appear hypoattenuating on non-enhanced computed tomography.

When contrast is used, intrahepatic cholangiocarcinoma shows enhancement only on delayed imaging series, but not in the arterial or portal venous phase images. When necrosis and mucin are extensive in the center of the tumor, the center of the tumor remains hypodense despite contrast administration. A recent study has found that tumors that show enhancement of more than two-thirds of the tumor’s bulk are usually associated with a worse prognosis.

Hepatocytes typically take more contrast compared to the biliary cells; therefore, a tumor that arises from biliary epithelial cells, such as cholangiocarcinoma, is expected to be hypointense compared to the surrounding hepatic tissue when a hepatobiliary-specific contrast agent is used.

The main purpose of this imaging technique is to identify occult microscopic metastases. Tumor cells are expected to be more metabolically active, hence take more glucose; therefore, tumors that arise from the biliary epithelium are expected to appear as hypermetabolic regions. Unfortunately, benign biliary tumors, such as intrahepatic biliary adenoma, are also metabolically active.

Klatskin tumor: cholangiocarcinoma located at the confluence of the right and left hepatic ducts.

Intrahepatic biliary adenomas are rare benign biliary epithelial tumors that account for about 1% of all primary liver tumors. They are usually an incidental finding and do not cause any symptoms. 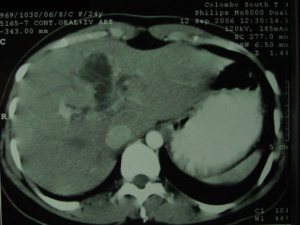 On computed tomography scans, these lesions are usually very well-defined and are small in size. They are typical of low-intensity on unenhanced computed tomography. When contrast is used, these benign tumors typically show heterogenous enhancement with central cystic changes.

Because these tumors are very well-defined, they are unlikely to be malignant and therefore a wait-and-see approach can be followed. A repeat computed tomography scan at two months and six months is recommended to check for any size changes. A benign intrahepatic biliary adenoma is expected to show no growth over this short period or very minimal growth. If the tumor shows slight growth, it is advisable to go for hepatobiliary contrast-enhanced magnetic resonance imaging.

Unfortunately, these findings are the same one would expect in a cholangiocarcinoma except for the lack of invasiveness, infiltrative nature, and irregularity which are seen in malignant lesions. Regardless, most patients opt to go for surgical removal of the lesion with a hepatic segmentectomy. Once the lesion is removed, a biopsy study can then confirm the diagnosis. If the diagnosis was confirmed to be a benign intrahepatic biliary adenoma, further follow-up and treatment is usually not needed.