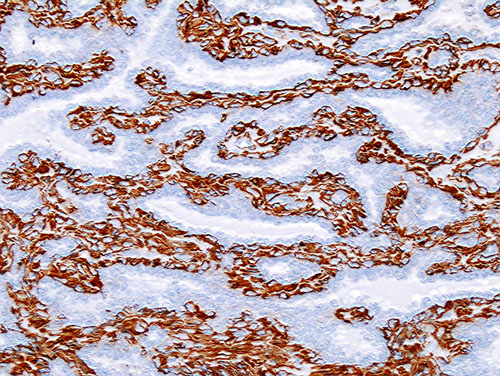 Ductal papilloma is defined as the abnormal growth with a papillary configuration of breast stroma and epithelium within a breast duct. It is a benign lesion that consists of branching fibrovascular cores with overlying layers of epithelial cells. These papillomas can be single or multiple, and when they occur in younger patients are known as juvenile papillomatosis.

Pathological nipple discharge (PND) is a term used to describe abnormally bloody, milky or another form of nipple discharge that is usually a presenting feature of different breast diseases with breast papilloma being the commonest.

Epidemiological characteristics for breast papilloma are different depending on the exact type of papilloma that is in question. For instance, ductal papillomas are usually found in women aged 30 to 50 years with the mean age of presentation being 48 years. The occurrence decreases beyond 70 years. Solitary ductal papilloma is not associated with an increased risk of breast cancer if diagnosed properly.

Once a papilloma is excised, it appears like a lobulated, soft mass that has a cystic cavity. This cyst usually contains a bloody or serous fluid which explains the pathological nipple discharge commonly found in patients with ductal papilloma.

Usual ductal hyperplasia is usually present in patients with ductal papilloma. Ductal papillomas might also have a myoepithelial component.

Intraductal papillomas are usually too small to be palpable. The most common presenting feature in solitary ductal papilloma is pathological nipple discharge that is either bloody or serous. Nipple discharge is confined to a single duct and applying pressure to that duct can express more discharge. This finding, however, is not specific for ductal papilloma, it can also be seen in breast cancer. The discharge is usually unilateral, and the patient may also present with a palpable breast mass and breast pain.

Patients with microscopic papillomas or multiple papillomas usually have small, peripheral lesions that are more difficult to diagnose because they are rarely associated with nipple discharge. Therefore, any patient with suspected ductal papilloma should be fully investigated with imaging modalities to confirm the diagnosis and to exclude breast cancer. 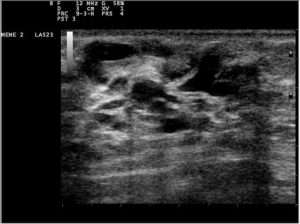 Mammography is mainly indicated to exclude breast cancer as the cause of pathological nipple discharge but cannot confirm the diagnosis of intraductal papilloma. Mammography can show micro-calcifications, which indicate possible malignancy and warrant further studying of the breast mass.

The next diagnostic step would be a ductography. Ductography shows filling defects in the affected breast duct. Choosing the duct to be studied is dependent on which duct expresses pathological nipple discharge on physical examination. Ductography is painful and patients might refuse the procedure.

Ultrasonography is beneficial in younger women and in women who have a palpable mass. Intraductal pathologies including ductal papilloma can be identified using ultrasonography and a percutaneous core biopsy can be performed under ultrasonography guidance to provide tissues for histological examination.

Cytological examination of the nipple discharge can exclude atypia and dysplasia, which are signs of malignancy.

More recently, mammary ductoscopy has been used to evaluate intraductal lesions. A thin scope is passed through the affected duct where direct visualization of the lesion and biopsy can be performed.

Treatment for ductal papilloma is highly dependent on the histological pattern of the lesion as well as on the patient’s individual risk of breast cancer.

Patients with multiple papillomas who are young and choose to undergo conservative treatment should have annual check-ups with breast mammography or other imaging modality to exclude possible transformation into breast cancer.

Future techniques that are less invasive such as imaging-guided vacuum-assisted core biopsy are proving to be both diagnostic and curative in a significant proportion of patients. Unfortunately, this method is applicable only when the intraductal papilloma is discrete and easily identifiable on ultrasonography or mammography, which is not the case in many patients.