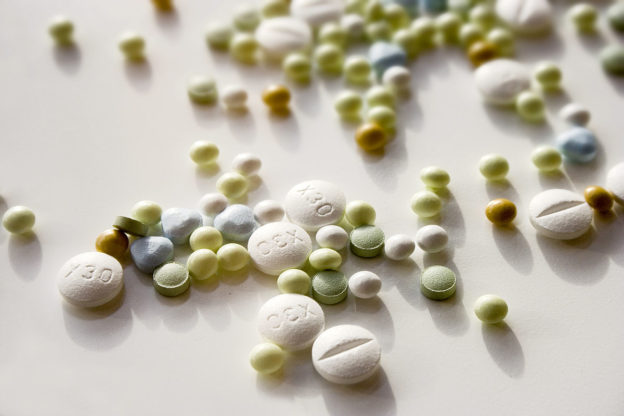 RCT stands for Randomised Control Trial. The results of RCT have gone to the extent of changing clinical practices.

An RCT is defined as an experimental interventional study that is conducted on clinical patients after obtaining their consent to participate where the researcher is controlling the exposure completely (they are prospective and the amount, type, and duration of a new intervention are well defined). The allocation of the patients to receive one intervention or another is randomized. 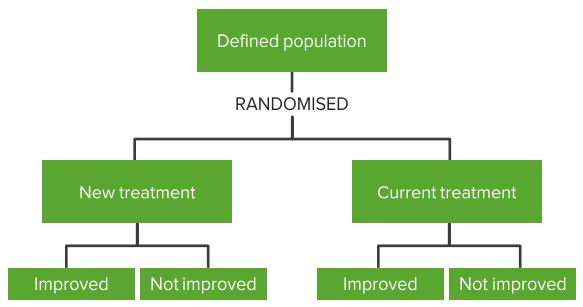 One of the most notable examples to be quoted is the decline in flecainide and encainide (antiarrhythmics) sales. This was after the RCT in NEJM on these drugs reported an increase in mortality (as opposed to the previous non-randomised studies).

While these two examples showed negative results, most RCTs are designed to test a new treatment or intervention that the researchers want to prove is superior to the current standard. A common, and recent example, is the currently ongoing RCT on the role of transcranial direct current stimulation in the treatment of depression and epilepsy in children with drug-resistant epilepsy.

RCT are very expensive and can take a long time to be completed. Secondly, RCT takes time to be published and some of the findings described in the study might not be relevant at the time of publication.

The variables which were evaluated in RCT studies are limited (commonly referred to as the primary and secondary outcomes) and might not represent the complete clinical picture of the patient.

There remains a big problem of conflict of interest while conducting an RCT. Nowadays, most research journals and regulatory bodies such as the FDA have asked the researcher/principal investigator and the other persons involved in the study to fully disclose the competing conflict of interest, however, it still remains debatable whether it is fully authenticated.

The concept of withholding medication to the control group or giving the new medication/intervention to the treatment group (with its possible dangerous effects) remains a commonly discussed ethical question. The RCT requires a proper ethics committee approval of the local governing body to be performed.

The disadvantages can be summarized in the following points:

Difference Between Pragmatic and Explanatory Trials

Pragmatic trials are trials which are carried out in order to evaluate the effectiveness of an intervention in the day-to-day real-life application, whereas the explanatory trials are done under routine stringent conditions (the common way in which RCT are performed.)

As already discussed in the disadvantages, a problem occurs in generalization of the findings of RCT. This is the reason why pragmatic trials are gaining momentum in current medical practice.

Placebo is medication that does not have any effect but are similar to the intervention drug in terms of texture, colour, smell and even in the route of administration. It is also recommended to be given in a similar treatment regimen in order to avoid the confounding effect. The treatment or intervention group may be a single group or it may be many groups.

Different groups may be tested using a number of different medications or different dosages and treatment regimens of the same medication. In addition to using placebo as control, in some of the studies, they also use positive control.

The positive control is the usage of a drug which is already established as treatment and efficacious against the disease of interest. Therefore, in this scenario, research hypothesis focuses on proving that the experimental drug is better than that of positive control.

Blinding commonly refers to the concealment of the allocation with regards to the group of individuals who are involved in RCT.

The old terms of single-blind, double-blind or triple blind is not currently recommended for use following the CONSORT guidelines of performing RCT. The term open or unblinded is used when no blinding is performed in the study.

As the number of blinded groups increases in a study, the risk of bias decreases and the authentication of the study also increases. 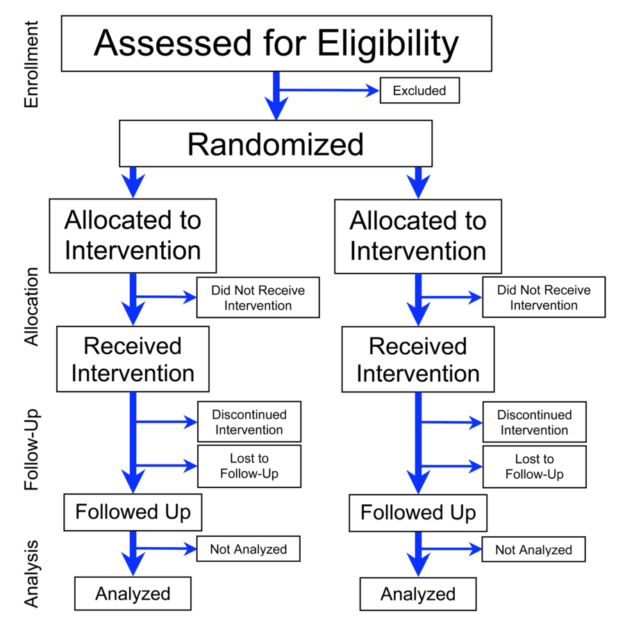 Image: “Assessment of eligibilty according to the CONSORT guidelines which are used for conducting RTC” by PrevMedFellow – Own work. License: CC BY-SA 3.0

The aim is to provide adequate sample sizes for subgroup analysis, which would in turn increase and maximize statistical power to completely eliminate the selection bias, to keep it to the bare minimum and to nullify the effect of covariance by allocating it equally to both groups, so that the covariate effect gets nullified.

RCT can be classified based on: study design, hypothesis or on the pragmatism of the study.

Classification based on study design

The categories are parallel group, crossover, cluster and factorial.

As the name suggests, in a parallel design, when we allocate participants randomly, on the basis of randomization, the participants may be allocated to one group and all the members within the group will receive one of the studied medication. In the crossover design, the participants would be changed to the opposite group (after the washout period of the first drug). So, every participant would receive both interventions but in a different time and at a random sequence.

In some of the cases, it would be that there exists inherent clustering within the studied participants. This would be utilized in the case of cluster study design, where all the persons within the cluster are assigned to a particular intervention. in this case, the clusters are selected randomly rather than by the participant.

Difference between the superiority non-inferiority and equivalence trial

In most RCTs, the hypothesis is to prove that the intervention which is being studied is better than the control or the positive control which is used in the study.

In addition to the superior difference, the researcher can also show that the intervention is equivalent to that of the positive control (this is referred to as the equivalence trial) or that there is a margin within which the intervention studied can be compared with that of positive control. This margin is referred to as the non-inferiority margin within which the outcome of interest should be present.

Experimental studies are also known as interventional studies and are intended to compare the effect of treatment with that of control in humans. In accordance to drug discovery, for a new drug to be approved, it has to pass through the pre-clinical stages, followed by four phases of study.

Phase 1 is conducted in healthy human volunteers and the primary aim is to determine whether the drug is safe and also to establish the maximum safe dosage along with pharmacokinetic and pharmacodynamic measurements.

Phase 2 is conducted in a relatively small number of patients and is intended to determine the effect of treatment after using the drug.

Phase 3 represents a more elaborate study, in which around 1,000 patients are involved and the new drug is compared with the standard drug.

Phase 4 represents the post-marketing surveillance studies, where the drug is checked for any side effects after being approved.

Other types of experimental studies include self-controlled studies whereby patients are evaluated as their own controls over a period of time, the crossover study (already described), observational studies (in turn can be divided into prospective or retrospective studies).
Prospective represents observation of data from the beginning of the study, whereas the retrospective represents the determination of data from the records which have already been taken from the patient.

Ecological studies typically represent studies on factors which modify the risk on a defined population. The population might be defined based on a geographic location or on a temporal basis.

Though it has its own advantages, there exists a component of “ecological fallacy” (the findings might be present in the group but they do not represent the individual person’s data.)

It is highly probable that if the investigator knew the groups to which the patients are allocated, he would be favoring the outcome of interest. This is avoided by means of “allocation concealment” during all times when the study is conducted. This could be done by means of a central monitoring committee, using sealed and opaque envelopes, central randomization processes etc.

Intention to treat and per protocol analysis

The essential aim of randomization is to eliminate the basement confounding factors which are known or unknown in both groups, but it is very possible that some of the participants of the study in both groups might not complete the entire study and could have deviated from the protocol.

There are two options for this scenario: these participants could be eliminated from the analysis and the remaining participants may be used to evaluate the result. This is known as per protocol analysis but the major disadvantage with this method is that we are essentially eliminating the benefit of randomization, which would have taken care of the baseline confounding variables. Secondly, even in real life, it is very possible that the patient might not complete the entire treatment. Therefore, elimination may not be a complete solution.

An alternative method is the intention to treat analysis, where after randomization, all the participants in the treatment and control group, whether they completed the study or not, are taken for analysis and their results are evaluated. This represents a more realistic real-life scenario. However, it also has its own disadvantage in that even the persons, who have not completely taken the drug are included in the analysis leading to misleading results in some scenarios.

It’s a common scenario in RCT to report the results of both the intention to treat and per protocol analysis so that the readers themselves can decide which one to infer.

Perhaps one of the most important aspects in designing an RCT is to identify your study population. This is the reason why RCTs have inclusion criteria and exclusion criteria.

The exclusion criteria, on the other hand, are put to prevent the inclusion of patients who would alter the desired outcome of the study. This might be because such patients have a contra-indication to the new intervention, or they are known to not respond to this new modality of treatment. The following reasons of why we might exclude patients from an RCT help us in identifying the exclusion criteria of our RCT: