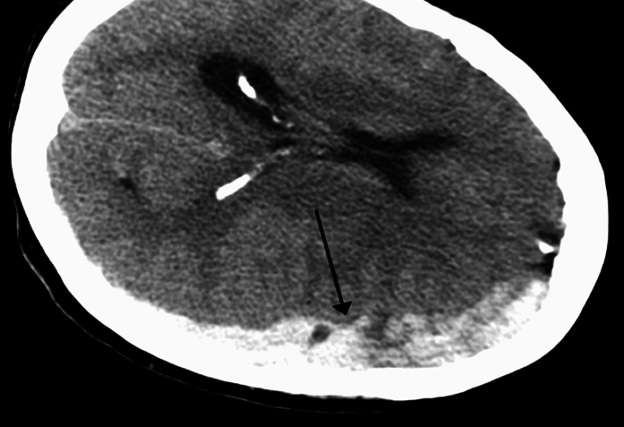 Bleeding within the cranial cavity causes hemorrhagic stroke, and is one of the leading causes of death. Intracranial hemorrhages (ICH) can be a complication of hypertension. They occur in about 12–15 per 100,000 individuals, including 350 hypertensive hemorrhages per 100,000 elderly individuals. There are roughly 7,000 surgical operations to remove intracranial hemorrhages in the US every year. Factors that increase the risk of ICH include male sex and age over 55 years. In younger patients, arteriovenous malformations are usually the cause of ICH.

There are four types of intracranial hemorrhages according to the location:

The brain is covered by 3 protective layers called meninges – the pia mater, arachnoid mater, and dura mater. Dura mater is the outermost membrane covering the brain, located just below the skull. Dura mater contains the major blood vessels which divide into capillaries within the pia mater. The arachnoid layer of meninges is the middle layer cushioning the brain like a loosely fitted sac inside which lies the cerebrospinal fluid (CSF). The subarachnoid space under the arachnoid layer also contains blood vessels which too divide into capillaries in the pia mater. 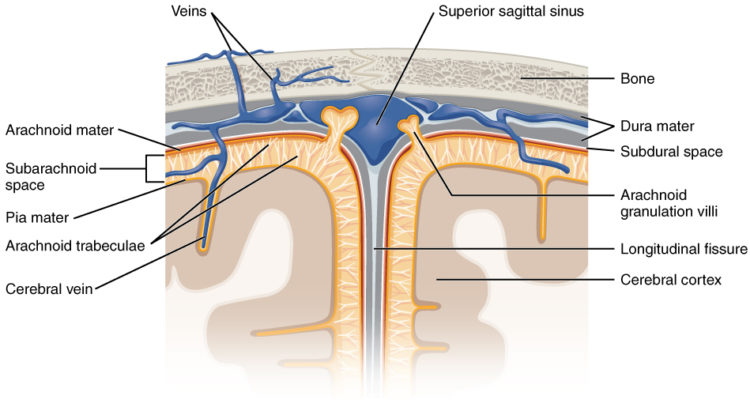 Epidural hemorrhage is bleeding outside/on top of the dura mater – right below the skull. It occurs mostly after direct trauma to the head. Patients present with loss of consciousness after a direct blow to the head and, occasionally, altered mental status. Trauma to the head can fracture the skull and rupture major vessels leading to hematoma formation. This hematoma can cause increased pressure on the brain. Since all three meninges also cover the spinal cord, epidural hematomas can also occur in the epidural space of the spinal cord.

90–95 % cases of epidural hematomas are unilateral, however, multiple hematomas can also be formed. More than 95 % are supratentorial: temporoparietal (60 %), frontal (20 %) and parietooccipital (20 %). Less than 5 % are located infratentorially in the posterior fossa. The most common site of epidural hematoma is the pterion – the temporoparietal locus.

The pterion is the site where the parietal, temporal, frontal and sphenoid bones of the skull meet. The bony part of the skull at pterion is relatively thinner and direct trauma to the head can result in the fracture or dislocation of the suture at this site. The middle meningeal artery emerges from the neck region and travels across the pterion to divide into its branches. Other sites of epidural intracranial bleeds include the frontal area involving anterior ethmoidal arteries, the occipital area involving transverse or sigmoid sinus, and the vertex involving the superior sagittal sinus.

Patients present after trauma to the head associated with an episode of loss consciousness followed by a normal level of consciousness and ongoing headache (called the lucid interval). The duration of the lucid interval without neurological deterioration in epidural hemorrhage is generally short and ranges from several minutes to hours. The lucid interval is dangerous because patients will believe that nothing is wrong, but if the hematoma gets large enough, it can cause a brain herniation and death.

It is comparatively not as common as other types of intracranial bleeds but can be dangerous and lead to increased intracranial pressure (ICP). A unilateral cause of ICP can cause a midline shift of the brain because the hematoma pushes the brain towards the opposite side. Midline shifts are associated with a skull fracture in approximately 75 % of cases.

Both CT and MRI scan can be used to view epidural hematomas, but CT scans are faster and less expensive. CT scan shows a biconvex lens-like hematoma that cannot cross the suture lines.

Epidural bleed can be treated conservatively or can be surgically evacuated. As a whole, this condition has a good prognosis if diagnosed early and managed as soon as possible. 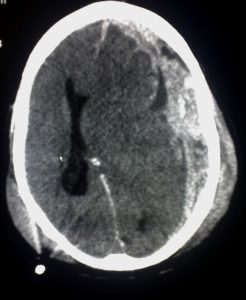 Image: “This CT scan is an example of subdural hemorrhage caused by trauma.” by Glitzy queen00. License: Public Domain

Subdural hemorrhages usually occur in car accidents. When the rapid head movement in one direction is suddenly stopped, for example, in a car accident or child abuse, leakage/tearing of veins leads to blood accumulating below the dura mater. The etiology of subdural hematoma is different in different age groups. Subdural hematoma in infants is due to non-accidental injury, in young adults, the causes are a bike or car accidents and in old age subdural bleed usually follows after a fall. Minor head trauma can also cause subdural hemorrhage in patients receiving anticoagulants.

Subdural hemorrhage occurs between dura and arachnoid mater and involves the tearing of bridging veins. Leakage of blood from the bridging veins causes the accumulation of blood below the dura mater compressing the brain matter and raising the intracranial pressure. A crescent-shaped subdural hematoma that can cross suture lines is seen on the CT scan.

In contrast to epidural hematoma, subdural hematomas can cross the suture lines but are limited by reflections of dura mater, (falx cerebri, tentorium, and falx cerebelli). A patient with a subdural hemorrhage usually presents with severe headache and confusion.

This type of hemorrhage occurs in the subarachnoid space just outside the pia mater. Patients with subarachnoid hemorrhages present with severe, sudden and sharp headache followed by vomiting and unconsciousness (commonly referred to as “the worst headache of their life”). This type of intracranial hemorrhage can be associated with a family history. It is also common in alcoholics and drug abuse patients.

One of the causes of subarachnoid hemorrhage is a rupture of an aneurysm or arteriovenous malformations in the brain. Aneurysms in the brain include saccular (berry) aneurysms, fusiform aneurysms, and microaneurysms (Charcot-Bouchard). Almost 2% of adults have intracranial aneurysms Reference: Harrison’s 20/e).

Saccular (berry) aneurysms vary in size from a few mm to cm {classified as small-less than 10 mm, large-10 to 25mm, and giant-greater than 25 mm} (Reference: Harrison’s 20/e) are spherical shaped and involve only a portion of the vessel wall (they look like a berry popping out of a vessel). They can often contain a thrombus. 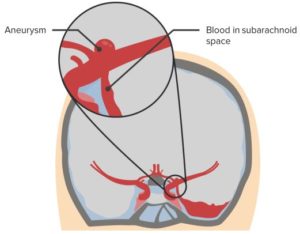 Charcot-Bouchard aneurysms are microaneurysms, which occur in small blood vessels (< 300-micrometer diameter), most often the small vessels of the basal ganglia. They are associated with chronic hypertension. Common sites of aneurysms are in the anterior cerebral artery (part of the Circle of Willis) and at the internal carotid artery. The classical presentation of subarachnoid hemorrhage is a sudden, severe “thunderclap” headache. Urgent neurological evaluation and intervention are required. Even after the intervention, there is high incidence of mortality and permanent neurological deficits in severe cases. The severity of subarachnoid hemorrhage is graded from 1 to 5 using the Hunt-Hess/World Federation of Neurosurgical Societies classification. 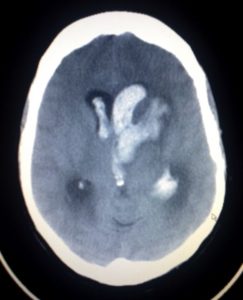 Image: “This image shows an intracerebral and intraventricular hemorrhage of a young woman. The woman was one week postpartum, with no known trauma involved.” by Glitzy queen00. License: Public Domain

Bleeding inside the brain matter is called an intracerebral hemorrhage. Patients present with neurological symptoms/deficits depending on the area of the brain involved. Common symptoms include headache, nausea, vomiting, focal neurological deficit and altered state of consciousness. These types of hemorrhages are usually associated with hypertension. 35–45% of patients with intracerebral hemorrhage die within 30 days.

Causes and risk factors of ICH

CT-scan of the head/brain is the investigation of choice for the diagnosis of intracranial hemorrhages because it is fast and accurate enough to diagnose bleeds, specifically non-contrast CT-scan.

Epidural – convex lens that does not cross the suture lines, can cross the midline