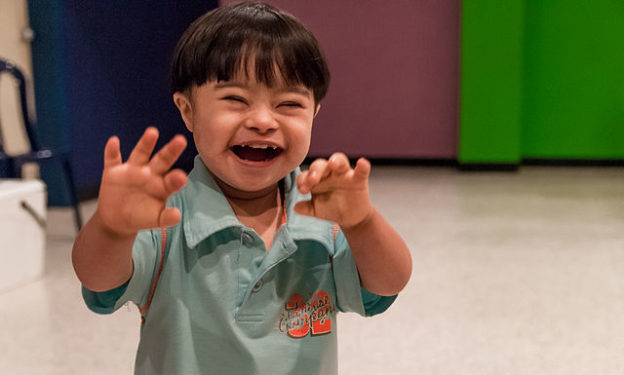 It is also known as a cognitive disability or mental retardation and refers to a chronic condition involving the limitation in mental functioning and skills such as communication, taking care of oneself and others.
This results in social segregation of a child—and thus delayed development of the child’s behavior. The onset of sub-average intelligence is usually in the childhood period, therefore, the development of the child is impaired.

Intellectual disability among children is one of the most common causes of developmental disability. It affects 1–3% of the worldwide population; all of them require special care but very few receive it. Out of this number, 40–50% have emotional and behavioral problems or are affected by a psychiatric disorder in their lifetime.

Note: In the United States of America, 6.5 million children have an intellectual disability, with more than 540000 children requiring special care—such as special education in community-based care centers.

Etiology and Pathophysiology of Intellectual Disability

Intellectual disability is thought to follow certain triggers that alter the development of the child’s brain and cognitive function in uterine life or after birth.

Fetal abnormalities such as NTDs are genetically determined, and the presence of such defects leads to the compromise of brain maturation and cognitive development thus leading to intellectual disability.

Some genetic conditions are associated with impaired intellectual ability:

Tuberous sclerosis is inherited in an autosomal dominant pattern and results from a mutation of the gene that forms the ectoderm. Lack of expression of this gene hinders the development of the derivatives of the ectoderm which include nervous tissue, thus leading to intellectual disability. Skin manifestations of angiofibroma and macules are also seen.

Phenylketonuria is an autosomal recessive disease characterized by a defective enzyme used in the breakdown of phenylalanine, thus the amino acid accumulates in the body. The chemical is toxic to the brain, and accumulation in developmental stages of life leads to cognitive impairment. It has associated symptoms of hypertonia, hyperreflexia, musty color of urine and sweat. Seizures and tremors may also occur in extreme nervous system damage.

Fragile X syndrome is an X linked inherited disorder that is characterized by constriction of the X chromosome at Xq27.3 which renders the X chromosome fragile, and it breaks off easily. It is more common in males and presents with delayed speech development, restlessness, hyperactivity, inattentiveness, social withdrawal and depression.

Infections occurring in the uterus can lead to intellectual disability since they interfere with organogenesis causing mental retardation, microcephaly, hearing, and visual impairment. They include the TORCH complex of organisms.

Once the fetus is exposed to teratogens, such as alcohol, the development process is halted or takes place in a disorganized manner. Microcephaly, growth retardation, CNS dysfunction, and delayed development result.

It causes microcephaly and altered development of the whole brain, including cognition, thus leads to intellectual impairment. Since it results from nutrient insufficiency, an ischemic injury may also lead to brain damage.

Perinatal hypoxia occurring during the birth of the baby leads to ischemic injury to the baby’s brain and damage of the brain regions involved in cognitive functions.
Development of perinatal infections such as HSV-2 virus leads to the development of encephalitis which leads to neurological deficits if untreated. This causes profound retardation and microcephaly.

Hyperbilirubinemia, which is a common occurrence in the neonatal period, is toxic to the brain cells and causes damage of the brain, sensorineural hearing loss and mental retardation. Blood group incompatibility and immature liver function are the most common sources.

The diagnostic and statistical manual of mental health classifies intellectual disability into the following subgroups based on intellectual functioning assessment (IQ score) in relation to the general population’s mean score of 100.

Clinical features of the disease are seen if the patient is severely incapacitated. In most circumstances, however, the symptoms manifest once the child begins to attend a school or play with fellow children. The symptoms that are evident include delay of motor functions and social development.

There is delayed achievement of the developmental milestones in comparison to other children. It occurs in association with fine motor delay and infrequently accompanies the cognitive and language delay. Subtle delays in a gross motor acquisition, or clumsiness, may be identified in the developmental assessment.

The children are not able to undertake activities such as self-feeding, toileting and dressing as seen with the normal population. Prolonged, messy finger feeding and drooling are signs of oral-motor incoordination.

Children with intellectual disability have difficulties with memory, problem-solving and logical reasoning. They have difficulty following instructions or directions well displayed in class. Special attention is needed to help them.

Intellectual disability occurs in an array of different conditions and the features commonly associated with it include microcephaly, macrocephaly, history of intrauterine growth retardation, prematurity and congenital anomalies.

These patients feed poorly and end up having stunted growth with a short stature that may suggest a genetic disorder, fetal alcohol syndrome or hypothyroidism.

This examination should include assessments of head growth, muscle tone, strength and coordination, deep tendon reflexes, persistent primitive reflexes, ataxia and other abnormal movements such as dystonia.

Vision and hearing should always be tested particularly among those with severe impairments since these patients have auditory and visual impairments in association with the intellectual disability.

If the patient has any form of aggressive or self-injurious behavior the treatment of choice is to reinforce the evasion mechanisms.

It should be determined whether the patient has any problems with attention and communicating with people or following instructions.

Medical conditions must be checked out as they could be the cause of the discomfort.

These patients are predisposed to the development of certain depressive and bipolar disorders due to the social alienation. They must be identified if present and treated appropriately.

To ascertain that the patient has an intellectual disability, the following must be done:

This is performed using standard tests, such as the Binet intelligence testing. The normal population has a mean score of 100. Intellectual disability is defined as a variation of more than 2SDs (30) below the average population score which is a score of < 70.

Assessment of adaptive behavior and play

Interaction and behavior in comparison with other children of a similar age to demonstrate delay or altered behavior.

Identification of the physical characteristics

Characteristics that are seen in the diseases associated with intellectual disability such as:

Some investigations to consider include:

Mental retardation is treated mainly by psychosocial counseling and environmental modulation to avoid the occurrence of depression and other mental illnesses. Once they occur psycho-pharmacology should be employed.

This is applied to address behavioral problems:

Behavioral interventions such as behavioral analysis and reward of specific behavior at their occurrence lead to an acceleration of the rewarded behavior. Behavior decelerating tactics involve rewarding in the period bad behavior did not occur.

Environmental management and elimination of any stresses or triggers of bad behavior such as noise, increased temperature, the transition from school or residence, personal loss or rejection by friends, hostility from friends, physical abuse and confrontation of large crowds.
Client and family education is to allow the patient to get maximum attention and support in his/her activities. This reduces the social alienation associated with mental retardation and the accompanying occurrence of depressive episodes.

The use of pharmacological methods is restricted only to the diagnosis that is made as per the DSM V criteria. Clozapine and risperidone are common medications for depression and behavior modulation.

Other forms of therapy

The doctor-patient relationship is important in treating and preventing the occurrence of depressive episodes in both the affected child and his/her parents. Genetic counseling, especially when a prenatal diagnosis is made, is necessary. This treatment can be instituted together with other therapies.

Nutritional therapy such as intake of a low phenylalanine diet soon after birth is useful to avoid brain damage upon identification of PKU. The dietary restriction is continued for life, although the most important period is the developmental period.