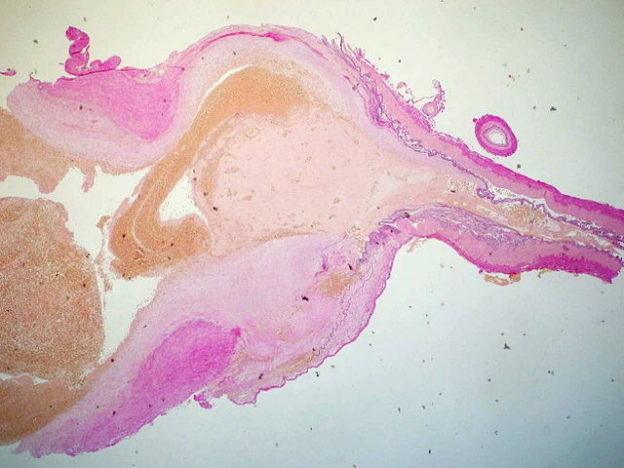 Definition and Epidemiology of Intracranial Aneurysms

A cerebral aneurysm is an abnormal dilation of a local area of the artery wall in the central nervous system (CNS). The term is commonly used interchangeably with intracranial aneurysm. Most occur at junction points of the major arteries of the brain. This is usually around the circle of willis. They can either compress adjacent structures or rupture and cause hemorrhagic stroke.

Studies done at autopsy show that 1 – 5% of the population suffer from unruptured intracranial aneurysms.

The majority of aneurysms occur around the circle of Willis, which makes up the major blood supply to the brainstem and supplies most of the cortex.

Incidence of ruptured aneurysms is around 10 in 100,000 people per year. Adults and women are at an increased risk of developing cerebral aneurysms, as are those with a family history of them.

Cerebral aneurysms are an acquired defect typically resulting from hemodynamic stressors. However, they can arise as a result of infections, tumors, and trauma.

A genetic component is likely as a family history is a risk factor for the development of an intracranial aneurysm. Patients with inherited connective tissue disorders like polycystic kidney disease, neurofibromatosis type 1, Ehlers Danlos syndrome type IV and Marfan’s syndrome have also been shown to have an increased risk of intracranial aneurysm development, and this should be taken into account during history in a patient with a suspected hemorrhagic stroke. 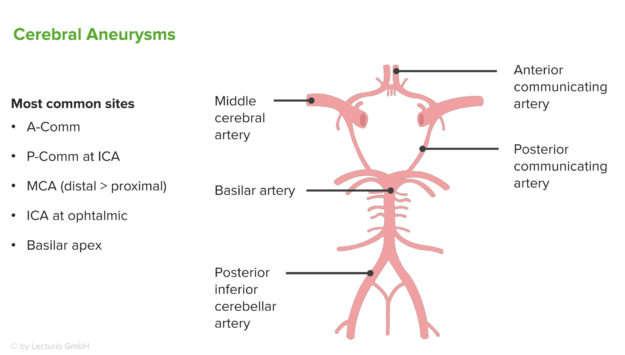 Intracranial aneurysms are classified by size and shape. Their shape is split into three groups:

Pathophysiologically, aneurysms form when there are weaknesses in the walls of the arteries supplying the CNS. However, it is less easy to ascertain how these form and the etiology of different classifications and sizes of aneurysms may be different.

Many hypotheses have been suggested for the link between smoking and saccular aneurysms. It has been suggested that inhibition of proteases (by smoking) causes the loss of connective tissues in the arterial walls. The pressure at these points along the arteries causes outpouching and development of aneurysms.

The obvious progression of a cerebral aneurysm is a rupture.

Many patients will have no symptoms associated with an unruptured aneurysm. However, an outpouching of the vessel can press on surrounding structures and cause various symptoms. Patients can experience:

Aneurysms can rupture, typically causing a subarachnoid hemorrhage. This is often described in patients as “the worst headache of their life” and its onset will be sudden. Patients will often also experience:

Diagnosis of an unruptured cerebral aneurysm 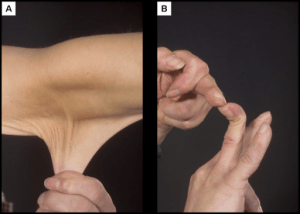 Other weaker risk factors can include:

Common symptoms were described above. The patient will typically give a history of a headache. They may have had seizures or have some nuchal rigidity. A decreased level of consciousness can be found in some patients.

The examination is typically unremarkable. In patients with strong risk factors and unexplained symptomatology, it may be prudent to order a number of diagnostic investigations. Investigations that may aid diagnosis are:

Diagnosis of a ruptured cerebral aneurysm

Patients whose aneurysm has ruptured will have a different presentation from those who have unruptured aneurysms. If a patient is suffering from a sudden onset severe headache, a subarachnoid hemorrhage (SAH) should be ruled out. Typically, these patients will also suffer from vomiting and loss of consciousness – coma and death can occur quickly and so suspected SAH is considered a medical emergency.

Other symptoms will include neck stiffness (nuchal rigidity) and Kernig’s sign.

CT head scan is your first port of call with any patient with severe onset headache. SAH is usually seen on a CT and has a sensitivity of 95% within 24 hours. If a CT confirms a subarachnoid hemorrhage, then lumbar puncture is not necessary, although in some cases where CT is inconclusive this may be indicated.

On lumbar puncture, you typically find xanthochromic CSF (yellowing of the CSF). Visual inspection of the CSF is usually sufficient for diagnosis. 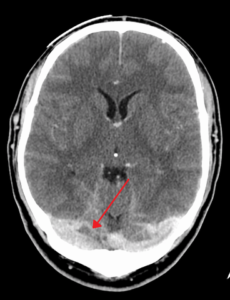 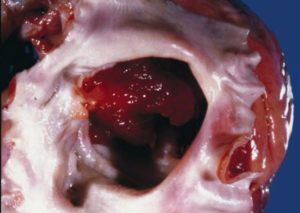 Image: “A gelatinous tumor is attached by a narrow pedicle to the atrial septum. The myxoma has an irregular surface and nearly fills the left atrium.” by The Armed Forces Institute of Pathology (AFIP) – PEIR Digital Library (Pathology image database). Image# 410012. License: Public Domain

Patients can either be treated conservatively and be observed, or surgery can be performed. Treatment is either by “clipping” or endovascular obliteration. This decision is made on a case by case basis.

When making the decision, a number of things should be considered. These include the patient’s age (older patients with less life expectancy are more likely to be given observation), the size and location of the aneurysm (some aneurysms are very unlikely to rupture e.g. cavernous carotid artery aneurysm and observation may trump treatment due to the risk associated with clipping, etc).

The risks of treatment should also be considered: rupturing the aneurysm during surgery can lead to hemorrhage and ultimately death.

Patients with a ruptured aneurysm are considered a medical emergency. Hunt and Hess grading should be done as this impacts treatment severity and swiftness. Hunt and Hess’s grades are used to assess how severe a subarachnoid hemorrhage is and are as follows:

Give calcium channel blockers (to reduce vasospasm) and maintain a systolic blood pressure press 135 mmHg. Clipping or endovascular therapy should then be considered for any unruptured aneurysms. Endovascular therapy is preferable.

Patients with an unruptured cerebral aneurysm are at significant risk of rupture and death. Patients can also develop hyponatremia, experience seizures and hydrocephalus. In the longer term, aneurysms may recur.

Prevention is done via screening for unruptured aneurysms. Magnetic resonance angiography (MRA) is indicated in patients with two+ family members who have been diagnosed with cerebral aneurysms. Screening is also performed for patients with heritable connective tissue disorders like Ehlers Danlos syndrome. Patients who have had a previous history of aneurysms should also be screening periodically (every few years).

Hunt WE, Hess RM. “Surgical risk as related to time of intervention in the repair of intracranial aneurysms.” Journal of Neurosurgery 1968 Jan;28(1):14-2