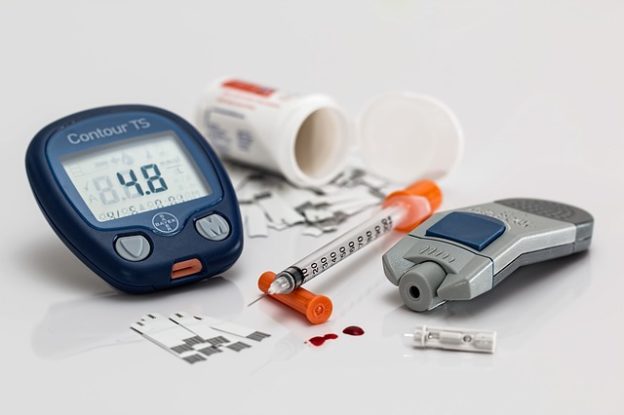 There are 2 main types of diabetes mellitus: type 1 and type 2. In type 1, patients have a complete deficiency of the required amount of insulin; type 2 is caused by insulin resistance (insulin deficiency can also occur in varying amounts, but it is not the primary cause). Type 1 diabetes is an autoimmune disease that leads to the destruction of the beta cells of the pancreas.

In type 1 diabetes mellitus, insulin is given as replacement therapy, while in type 2, insulin is given for the control of hyperglycemia and is added when initial treatment with non-pharmacological treatments such as exercise, diet control, weight reduction, and oral medication (i.e. metformin) are not able to control a patient’s glucose level.

In the past, insulin was extracted from animals for use as treatment in humans. This resulted in the development of antibodies against the injected insulin in some patients, leading to complications.

This barrier was resolved through the introduction of biosynthetic human insulin, which is manufactured by using recombinant DNA technology.

There are 2 categories of recombinant insulin. The first category is rapid-acting insulin, which is intended to be administered after a meal. It takes effect approximately 15 minutes after the injection. The second category is long-acting insulin, which lasts for around 24 hours (basal insulin). A combination of the 2 types of insulin is usually used to treat diabetes mellitus.

Insulin facilitates glucose intake into the cell by increasing potassium intake (a mechanism that is an asset for the treatment of hyperkalemia) (see table below). The main mechanism of degradation of insulin is receptor-mediated endocytosis followed by degradation through insulin-degrading enzymes.

Insulin also decreases glucose levels by increasing the synthesis of glycogen (the storage form of glucose), decreasing the formation of new glucose (gluconeogenesis), and channeling the glucose into a lipid synthesis pathway (see image below). 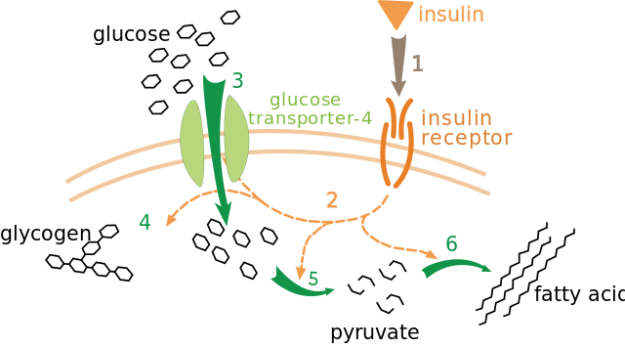 Image: Effect of insulin on glucose uptake and metabolism. Insulin binds to its receptor (1), which in turn starts many protein activation cascades (2). These include: translocation of Glut 4 transporter to the plasma membrane and influx of glucose (3), glycogen synthesis (4), glycolysis (5), and fatty acid synthesis (6). By: XcepticZP. License: Public Domain

Insulin is given as replacement therapy.

Metformin is the drug of choice for the treatment of type 2 diabetes. If metformin-only therapy is not effective, another oral anti-diabetic drug or insulin can be added. Insulin is preferred in patients with glycated hemoglobin > 9.5%, persistent random glucose level > 300 mg/dL, the presence of ketones in urine, and fasting blood glucose > 215 mg/dL.

In patients with gestational diabetes mellitus, insulin is not the preferred therapy; however, if necessary, insulin detemir can be administered.

The aim when treating patients with type 1 diabetes mellitus is to maintain the glycated hemoglobin level (HbA1c) at a value of 7% or lower.

Insulin therapy provides a complete physiological alternative (replacement therapy). Treatment consists of the administration of basal insulin (long-acting or intermediate insulin, or continuous administration of subcutaneous insulin) 1 to 2 times a day, and regular or short-acting insulin before meals.

The amount of the pre-meal bolus is determined by a number of factors, including the quality and composition of the food to be eaten, the amount of activity likely to be engaged in after eating, and the patient’s glucose level before the meal.

Hypoglycemia can occur frequently, so stringent glucose monitoring is required (i.e., at least 6 times a day through self-monitoring of blood glucose).

In addition, education, proper nutrition, and activity (30 minutes of aerobic activity per day) are an important part of symptom management. In fact, insulin administration can be modified based on results achieved from exercise.

Different types of MDI regimens are available, and the benefits of 1 regimen over another are unclear. The modest glycemic benefit that is seen with regimens that include insulin analog is not backed up by a corresponding benefit in the cardiovascular outcome, as clinical trials are lacking.

As its name denotes, in this mode of treatment, insulin is administered in a continuous manner and only short-acting or regular insulin is used. The disadvantage of using this mode is that it is not economical, and, as well, complications due to insulin pumps can occur.

The decision to use either continuous or injection treatment is mainly based on patient preference, as the efficacy and hypoglycemic episodes are the same. In 1 trial, it was demonstrated that when a patient was given a choice, more than half chose continuous subcutaneous therapy. 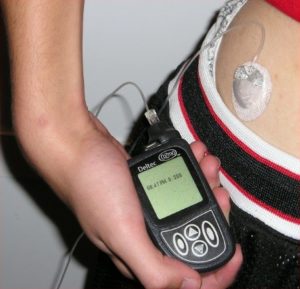 Image: Insulin pump with an infusion set. By: Mbbradford at English Wikipedial; transferred from en.wikipedia to Commons. License: Public Domain

Factors such as the variability in intra-day insulin requirements and inherent antagonizing hormones in the body need to be taken into account when administering insulin through the pump (see image below).

The types of insulin pumps currently available are as follows:

Weight gain and hypoglycemic attacks are concerns with the use of insulin in the treatment of type 2 diabetes. Insulin also has the risk of causing hypokalemia and lipodystrophy at the injection site. Another rare adverse effect is the risk of immunogenicity (allergic anaphylactic reaction).

Insulin as a Diagnostic Tool

Very rarely, insulin can be used to diagnose pituitary function problems, as insulin tolerance tests can help assess the integrity of the hypothalamic-pituitary-adrenal axis.

The effect of intensive treatment of diabetes on the development and progression of long-term complications in insulin-dependent diabetes mellitus. The Diabetes Control and Complications Trial Research Group. N Engl J Med. 1993 Sep;329(14):977–86.