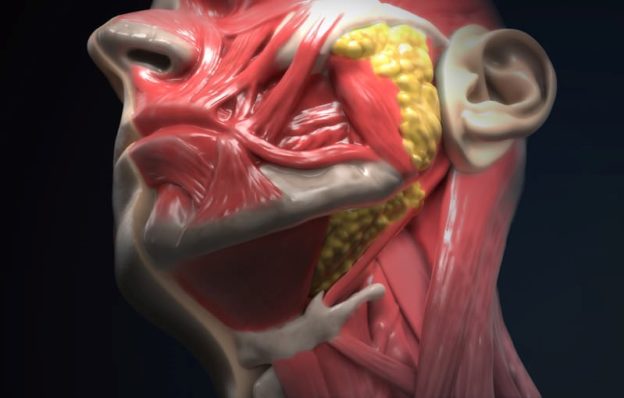 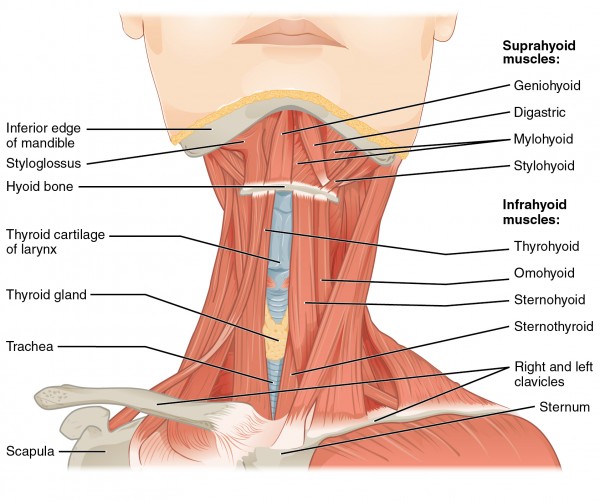 Picture: “Muscles of the anterior neck” by Phil Schatz. License: CC BY 4.0

Classification: Which Muscles Belong to this Group?

In evolutionary terms, the muscles are assigned to the large ventral longitudinal muscle system. In medical literature, the m. omohyoideus is considered part of the immigrated trunk musculature, which has insertion on the shoulder girdle, due to its osseous origin.

Via the venter inferior, the m. omohyoideus originates from the upper edge of the scapula, the margo superior scapulae, which is next to the incisura scapulae, and the respective venter superior inserts on the lateral third of the lower edge of the corpus ossis hyoidei. Its primary function is to stretch the fascia of the neck’s ventral chain; in a broader sense, it is also the vascular muscle of the vena jugularis interna, which is located below the m. omohyoideus.

Clinically, the v. jugularis interna is infiltrated with central venous catheters. Moreover, this muscle pulls the hyoid in a dorsocaudal direction and thus is involved in the process of swallowing. The muscle is innervated by the ansa cervicalis profunda of the plexus cervicalis (C1-C3).

Note: A peculiarity of this muscle is its origin. In some humans, the origin is the clavicula and not the scapula; this variation is called musculus cleidohyoideus. The function and innervation remain the same.

The middle neck fascia, also referred to as lamina praetrachealis, encloses both muscle bellies (the venter superior and inferior). At the site of the intermediate tendon, the lamina grows together with the vagina carotica, which is a firm sheath of connective tissue surrounding a vessel-nerve strand. The structures of this strand are a. carotis communis, v. jugularis interna, and n. vagus.

This muscle originates at the posterior surface of the manubrium sterni, the medial end of the clavicula, and partly from the sternoclavicular joint (SCJ). It inserts at the lower edge of the os hyoideum. Muscular sternohyoideus is innervated via ansa cervicalis profunda of the plexus cervicalis (C1-C3), pulls the hyoid bone in a caudal direction, and fixates it when the suprahyoid muscles tenses.

Note: This muscle can flatten at the origin and becomes narrower and thicker in the cranial direction.

Note: It connects to the glandula thyroidea with loose connective tissue.

This muscle is the continuation of the m. sternothyroideus and thus originates at its insertion, the linea obliqua of the cartilago thyroidea. The insertion of the m. thyrohyoideus is at the inner side of the lateral third of the corpus ossis hyoidei and at the lower edge of the medial surface of the cornu majus. This means that its insertion is lateral and distal to the m. omohyoideus. If the m. thyrohyoideus tenses, it closes the larynx by pulling the m. hyoid and the cartilago thyroidea close to each other. It also is innervated by the ansa cervicalis profunda of the plexus cervicalis (C1-C3).

As mentioned above, the m. levator glandulae thyroideae is not found in every human. It is a separated part of the m. thyrohyoideus. Its origin is at the corpus ossis hyoidei, and its insertion site is at the isthmus glandulae thyroidea. Innervated by ansa cervicalis profunda of the plexus cervicalis (C1-C3), it raises the thyroid gland.

Function and Pathophysiology of Infrahyoid Musculature

Picture: “Muscles that move the lower jaw” by Phil Schatz. License: CC BY 4.0

The infrahyoid muscles pull the os hyoideum and the larynx in a caudal direction. Besides the stabilization of the larynx via the sternothyroidal muscle loop, the infrahyoid muscles have another function: They influence phonation, the formation of speech. For example, if the thyroid cartilage is tilted against the cricoid cartilage due to changes in muscle tone, then vocal cord tension also changes.

This leads to the formation of hyperfunctional dysphonia, which presents as asynchronous oscillations of the vocal cords or even a unilateral halt of the vocal cords. Changes of the muscle tone cranially of the vocal cord plane influence the resonance chamber as well as vocal sound. Furthermore, the supra- and infrahyoid musculature is a functional muscle loop, with the os hyoideum as punctum fixum.

If the masticatory muscles of the jaw joint are stabilized, supra- and infrahyoid muscles act as flexors on the cervical spine and reduce its lordosis. This means that these structures also play an important role in the cervical spine.

Because of their connection to the hyoid, all the muscles described above have an influence on the hyoid, which results in the motion of osseous structures. If soft tissues are damaged (e.g., neuronal lesions), this can lead to position and movement disorders of the os hyoideum, which can result in speech disorders. When such symptoms arise, examination of the supra and infrahyoid muscles is required.

Because of the direct connection to the jaw muscles and the cranium or the cranial base, it may also be necessary to examine the atlanto-occipital joint. Treatment may include physiotherapy or speech therapy. 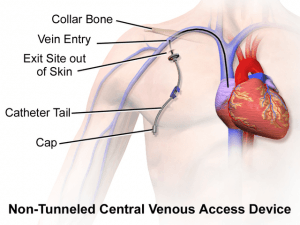 Because the infrahyoid musculature often is affected by secondary pathologies, largely as a result of neuronal lesions, it makes sense to take a closer look at the motor nerve branches innervating the muscles.

The motor fibers from segment C1 form the radix superior, which runs alongside the n. hypoglossus (cranial nerve XII) and then separates into the trigonum caroticum. There, it fuses with the radix inferior, which proceeds diagonally above the v. jugularis interna. The radix inferior contains fibers of vertebral segments C2 and C3.

One thought on “Anatomy of the Head and Neck: The Infrahyoid Musculature”