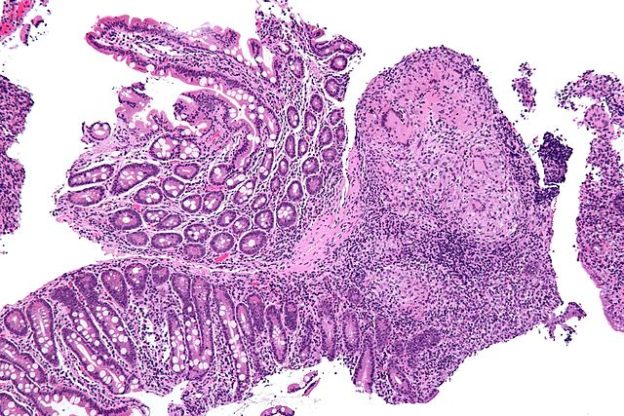 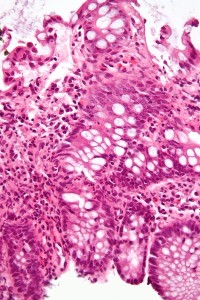 Inflammatory bowel disease (IBD) describes several autoimmune diseases involving inflammation of the bowel wall. Ulcerative colitis is usually isolated to the large intestine and rectum while Crohn’s disease may involve any portion of the gut tube, from mouth to anus. There are extraintestinal symptoms as well that range from connective tissue pathology to biliary disease.

The incidence of IBD is about equal in all races and both sexes. The age distribution is bimodal with one peak between 15–40 years old and one smaller peak between 55–65 years. There are higher incidents of the disease in developed countries and in countries further from the equator.

As with all autoimmune diseases, both genetic and environmental triggers work together to sensitize the immune system. There is about a 10-fold increased risk in developing IBD if a first-degree relative has the condition. Also, animal protein and recent antibiotic use increase the risk of developing the condition.

While the genetic trigger has not been identified several hundred genes are currently under investigation. These genes regulate cytokines and lymphocyte activation. Genetic influence may protect individuals from one form of IBD and increase the risk to another. Additionally, nicotine appears to provide some protection to ulcerative colitis and increase the risk of developing Crohn’s disease.

Pathology and Pathophysiology of IBD

The pathophysiology of IBD is currently under investigation. The most prominent theory involves a disruption in the intestinal response to luminal bacteria. Under normal circumstances, the intestinal mucosa is covered by a protective layer of mucin that inhibits bacterial colonization. Additionally, a large portion of the innate and adaptive immune system is involved in monitoring the GI tract and its contents through gut-associated lymphoid tissue (GALT) and microfold cells (M cells). These systems react to luminal pathogens and stimulate the adaptive immune system to secrete IgA antibodies.

Patients with IBD may have a deficiency in one of these protective mechanisms. The immune system of the large and small intestines abnormally reacts to gut bacteria resulting in inflammation. A reduced IL-10 response may also play a role. A dysregulation in Th-1 cell (helper T cell type 1) activation is associated with Crohn’s disease while a dysregulation in Th-2 cells is associated with ulcerative colitis.
Note:

Many signs and symptoms of ulcerative colitis and Crohn’s disease follow recognizable patterns. 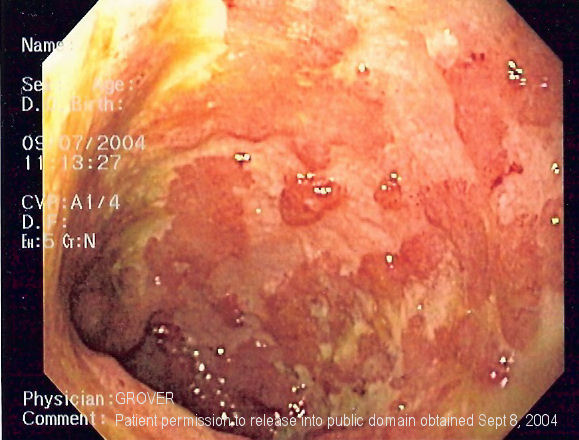 Image: “Endoscopic image of ulcerative colitis affecting the left side of colon. Note that the classic features of ulcerative colitis are not seen here, and that the image resembles Crohn’s colitis as it shows serpigious ulcers. The purpose of this image is to show the difficulty in differentiating between the two disorders on endoscopy.” by Samir. License: CC BY-SA 3.0

A battery of tests is recommended when IBD is suspected. A diagnosis is made after the evaluation of several testing methods. Endoscopy is the most definitive tool in this process.

A great deal of information can be gathered from a blood test. A CBC is useful to evaluate anemia, a major concern in IBD. Additionally, a thorough nutritional evaluation should be completed, especially iron studies, folate, and B12, and fat-soluble vitamins. ESR and CRP markers become elevated in the presence of an inflammatory event. Though they are not specific for IBD both can be used to monitor the condition. Every patient should also have a thorough stool analysis for infection by pathogenic bacteria such as Clostridium difficile or parasites. 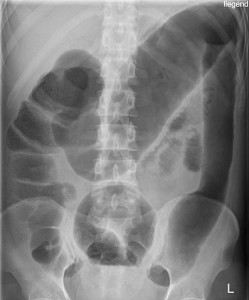 An abnormal abdominal x-ray may show a variety of intestinal issues. Signs of inflammation include thickened, edematous colonic wall with “thumbprinting” (an x-ray finding of thickened haustra projecting into the lumen of the colon) or air in the colonic wall, AKA pneumatosis coli. Colon enlargement greater than 6 cm is a sign of megacolon. This is seen in ulcerative colitis and is a surgical emergency.

The utility of an abdominal x-ray is greatly enhanced with contrast, especially the double-contrast enema (air is a negative contrast while the barium is the positive contrast). A lead-pipe sign implies a loss of haustra and is an indication of chronic ulcerative colitis. A normal rectum in the presence of inflammatory bowel disease implies Crohn’s disease. String sign, a heavily scarred and stenosed portion in the terminal ileum, and cobblestoning suggests Crohn’s disease. 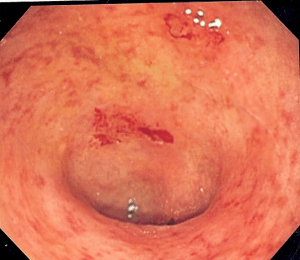 Image: “Endoscopic image of ulcerative colitis showing loss of vascular pattern of the sigmoid colon, granularity and some friability of the mucosa.” by Samir. License: CC BY-SA 3.0

Colonoscopy is useful to evaluate the mucosa directly for inflammation and strictures. The rectum is almost always spared and will appear grossly normal in Crohn’s disease. Biopsies can also be gathered via colonoscopy.

Esophagogastroduodenoscopy is only useful in evaluation lesions and aphthous ulceration in Crohn’s disease. Capsule enteroscopy is reserved for cases where standard colonoscopy and endoscopy do not provide results. Crohn’s disease may demonstrate longitudinal deep ulcers and skip ulcers, inflamed mucosa separated by normal mucosa. In advanced stages of the disease, these ulcers may appear as cobblestones.

The mucosa and submucosa of the colon and rectum are both involved in ulcerative colitis. Neutrophil infiltration and crypt distortion are common. Granulomas are not found in ulcerative colitis. About 50 % of Crohn’s disease biopsies will demonstrate granulomas. Inflammation extends throughout the entire wall and proliferation of the muscularis mucosa is frequently observed.

Many diseases besides Crohn’s disease produce non-caseating granulomas including sarcoidosis and leprosy; therefore, this histological finding is insufficient to diagnose Crohn’s disease. These hard tubercles contain giant cells epithelioid histiocytes without necrosis. Caseating (‘turning into cheese’) appear with necrotic tissue at their center.

Maintaining proper nutrition is an important part of IBD treatment, and they may provide some therapeutic effect. Deficiencies in fat-soluble vitamins (A, D, E, K), B12, essential fatty acids, and minerals are common. Low residue diets (low fiber) may provide therapeutic benefit.

There are two goals of therapy: remission and maintenance. It is a stepwise process.

Step 1: aminosalicylates: these drugs provide topical relief to the mucosa and are primarily used in ulcerative colitis. They are effective for inducing remission and maintenance.

Step 2: corticosteroids: steroids are ideal for flare-up treatment. They are not intended for prolonged use.

Step 3: immunomodulators: these drugs act as immunosuppressants by lowering the WBC or bind TNF-α. They take several months to achieve full effect and are reserved for maintenance therapy.

Surgery is also an option in ulcerative colitis only. Proctocolectomy, removal of the colon and rectum can surgically cure the disease; however, ulcerative colitis can also affect the distal ileum. It is usually reserved for complicated cases or malignancy.

Crohn’s disease can affect any part of the gastrointestinal tract from mouth to anus and is not curative. Surgery in this condition is reserved for complications of fistula, stricture, or obstruction.  Inflammation often reappears at the site of anastomosis. Short gut syndrome is a complication of excess small bowel resections.

Progression and Prognosis of IBD

Charlebois A, Rosenfeld G, Bressler B (2015). “The Impact of Dietary Interventions on the Symptoms of Inflammatory Bowel Disease: A Systematic Review”. Crit Rev Food Sci Nutr. 0