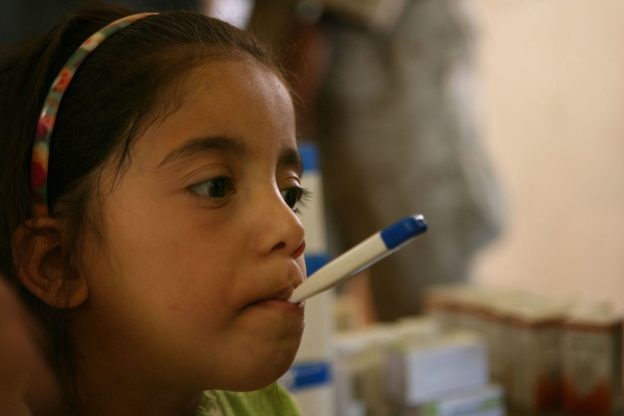 Image: “A young Iraqi girl waits patiently for her temperature to be taken by one of the physicians working at a medical clinic held for the people of Khandari, Iraq. Marines from 1st Battalion, 1st Marine Regiment worked with the Iraqi Army and Iraqi Police to organize the clinic.” by Cpl. William Skelton. License: Public Domain

Definition of Fever in a Well-Appearing Infant

Fever is a common presenting feature that can be seen in infants who appear well or ill. The distinction between ill and well-appearing is usually based on the clinical evaluation of the infant to exclude severe bacterial infections like meningitis, bacteremia, and urinary tract infection.

Up to 20% of infants have no specific cause of fever. Fever is defined as a documented rectal temperature of 38.0°C (100.4°F) or more. In this discussion, we also define well-appearing infants presenting with fever as those that do not have a previous medical condition, were not recently admitted to the hospital, or who have taken antibiotics for any other cause.

Epidemiology of Serious Bacterial Infections and Fever in Infants

Up to 70% of pediatric presentations to the clinic or emergency department are due to fever. Hence, fever can be considered the most common presentation in children who seek medical care.

The most important factors in predicting whether a child has a serious bacterial infection or not, are the age and toxic appearance of the child. Any infant who appears ill should be considered as having a serious condition behind their fever and should not be managed in an outpatient setting.

Most Common Diagnoses of Fever in a Well-Appearing Infant 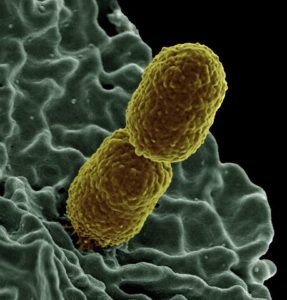 Urinary tract infections can present with fever in an otherwise well-appearing infant as they were the final diagnosis in up to 16% of the cases in one series. Meningitis was the final diagnosis in approximately 11.7% of infants who appear well despite having a fever. Further, bacterial meningitis was found to be the cause of fever in well-appearing neonates younger than 15 days. Infants of other ages who appeared well were unlikely to have bacterial meningitis as the etiology of their fever. Another diagnosis of fever in this group of infants was pneumonia, which was also noticed in neonates but not in older infants. Therefore, most infants above 28 days old and who have a fever but appear well are very unlikely to have any serious bacterial infection.

Diagnostic Tests for Fever in a Well-Appearing Infant

It is a challenge to determine which laboratory or invasive tests to perform in a case of fever in a well-appearing infant. Invasive examinations such as a lumbar puncture can lead to significant discomfort to the infant, with a risk of localized skin infection.

However, withholding such investigations might put the infant at risk of significant sequela. Because of these hazards and benefits, one should follow a systematic approach in determining which investigations should be performed in a given patient.

However, a diagnosis of bacterial meningitis was made in 2 of 81 cerebrospinal fluid examinations in well-appearing neonates with fever. Therefore, despite the low risk, this condition is very significant and a lumbar puncture should be performed in neonates who present with fever, even if they appear well.

While a complete blood count can show leukocytosis or leukopenia, these findings rarely point towards a single etiology in well-appearing infants presenting with fever. Regardless, a complete blood count with differentials should be performed in all infants presenting with fever because it can reliably differentiate between infants who are likely to have a serious bacterial infection and those who are not. A white blood cell count above 15,000 cells/mL or less than 5,000 cell/mL is highly suggestive of a severe bacterial infection, even if the infant looks well.

Perhaps, the most important investigation in a well-appearing infant with fever is a urinalysis. Up to 15% of infants who appear well despite having a fever were eventually diagnosed with a urinary tract infection.

Special imaging studies, such as chest X-rays, are most likely not indicated in well-appearing infants with fever, unless they are younger than 28 days. Even though only 1% of well-appearing neonates with fever might have pneumonia, the condition can still be considered severe enough to warrant a chest X-ray in this group. A chest X-ray should be reserved for infants who present with fever associated with cough or tachypnea, but appear well.

Finally, the most important diagnostic method to determine whether invasive investigations such as a lumbar puncture are needed in a febrile infant is perhaps the consultation of an emergency pediatrician. If an experienced emergency pediatrician is not available and the patient is less than 1 month of age, a complete blood count, urinalysis, and lumbar puncture should be routinely included in your evaluation of the feverish child, even if appearing relatively well.

Tests to order (in addition to febrile infant testing):

Critical: Do not start acyclovir until you get the culture results!

When to worry about HSV in a newborn?

Management of Well-Appearing Infants With Fever

Admitted infants should be watched for 24–36 hours. Discharge if cultures are negative.

If the only complete blood count is abnormal, consider discharge (on oral antibiotics?), and watch closely at home. Admitted infants should be watched for 24–36 hours, and discharged if cultures are negative.

A physical examination and patient history do not always identify patients with serious bacterial infections. Serious infections that are not recognized promptly, and are misdiagnosed and inappropriately managed, can cause significant morbidity or mortality.

Well appearing young infants with fever without known source in the emergency department: are lumbar punctures always necessary? via nih.gov