Infant of a Diabetic Mother 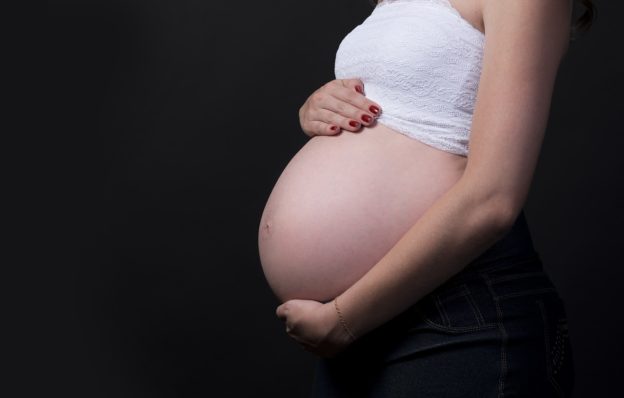 A significant proportion of pregnant ladies have some form of abnormal glucose homeostasis.

Recent estimates show that up to 10 % of pregnant women have:

The extent and type of complications that an infant of a diabetic mother might develop depend on whether maternal glucose levels were elevated during the first trimester or not. Early maternal hyperglycemia is commonly associated with congenital malformations of the fetus, whereas late maternal hyperglycemia might be associated with fetal macrosomia, polycythemia, and cardiomegaly.

Fetal macrosomia is associated with hypotonia and perhaps an increased risk of shoulder dystocia. They are puffy, fat and ruddy babies. Additionally, fetuses with macrosomia are more likely to be delivered by a Cesarean section. Infants who are classified as large for gestational age should be screened for hypoglycemia during the postnatal period. 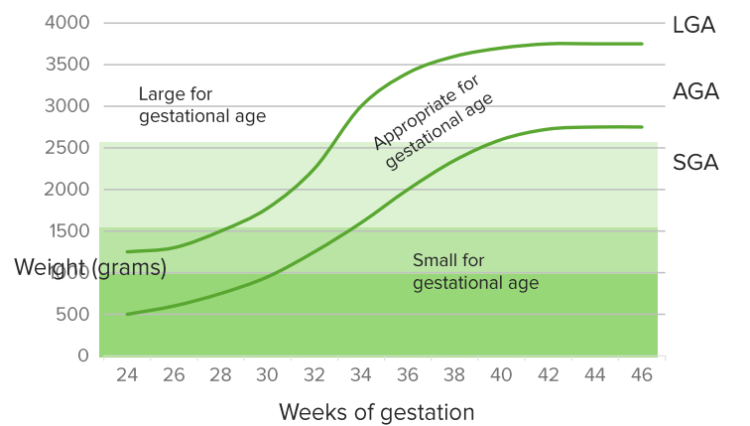 present within the first hours after birth. Hypoxia can be severe in these infants. Due to the increased risk of polycythemia, infants of diabetic mothers might develop persistent pulmonary hypertension of the newborn. Pneumonia is also more common in this group of infants. They present a few hours after birth with tachypnea, nasal flaring, and intercostal recession.

Infants of diabetic mothers who show the following symptoms should be screened for hypoglycemia:

Note: Hypoglycemia can also be associated with seizures, hypotonia, and other neurologic signs.

Hypoglycemia is due to hyperinsulinemia with low glucose levels. During intrauterine life, maternal glucose passes the blood-placenta barrier while insulin does not cross the blood-placenta barrier; thus the fetus has to produce insulin to control the glucose levels. Prolonged maternal hyperglycemia leads to fetal pancreatic beta cells hyperplasia which can cause hyperinsulinemia in the infant. After birth, maternal glucose is cut off, but the high insulin secretion remains in the newborn which triggers hypoglycemic episodes. The most important risk factors for hypoglycemia in infants of diabetic mothers are preterm labor and for the infant to be classified as large for gestational age.

In addition to the metabolic disturbances, infants of diabetic mothers can also develop electrolyte abnormalities such as hypocalcemia and hypomagnesemia. Infants who develop seizures with normal blood glucose have low parathyroid hormone levels after birth.

Additionally, two-thirds of infants of diabetic mothers have abnormal iron levels and metabolism at birth. This finding has been associated with impaired neuronal and brain development and can be associated with developmental delay. 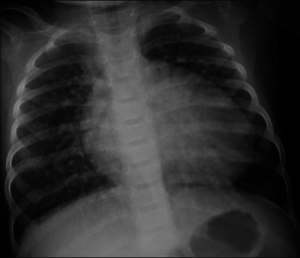 The high rate of congenital anomalies is associated with hyperglycemia and rapid growth of the body and other organs. This leads to misalignment of structures leading to development of anomalies, more so congenital heart abnormalities.

The use of insulin by the mother can be associated with neurologic immaturity which can manifest as immature sucking patterns.

Infants of diabetic mothers are also at an increased risk of:

and a myriad of congenital heart defects.

A complete blood count should be performed to diagnose polycythemia. Glucose concentrations should be determined in any infant who develops seizures, and hypoglycemia should be excluded.

Serum levels of magnesium, calcium and iron should be checked in infants of diabetic mothers. Hyperbilirubinemia is commonly seen in infants with polycythemia, and serum total and unconjugated bilirubin levels should be determined in these infants.

Management of Hypoglycemia and Electrolyte Disturbances in Infants of Diabetic Mothers

Hypoglycemia can be very hazardous to the infant and should be corrected as early as possible. Plasma glucose levels that are below 36 mg/dL but above 25 mg/dL require active intervention only if they remain below this level for a prolonged period, they do not improve with feeding and if the infant is symptomatic. When plasma glucose levels drop below 25 mg, intravenous administration of glucose should be initiated.

The best protocol to correct hypoglycemia is to administer a bolus dose of dextrose solution followed by continuous infusion of dextrose.

Infants diagnosed with respiratory distress syndrome might require oxygen supplementation, or intubation and assisted ventilation. Infants who develop apnea should be put on assisted ventilation to avoid prolonged periods of hypoxia which can be associated with permanent neurologic sequelae.

Finally, infants of diabetic mothers should be always referred to a specialist in neonatal care due to the increased risk of the various complications we described in this article.