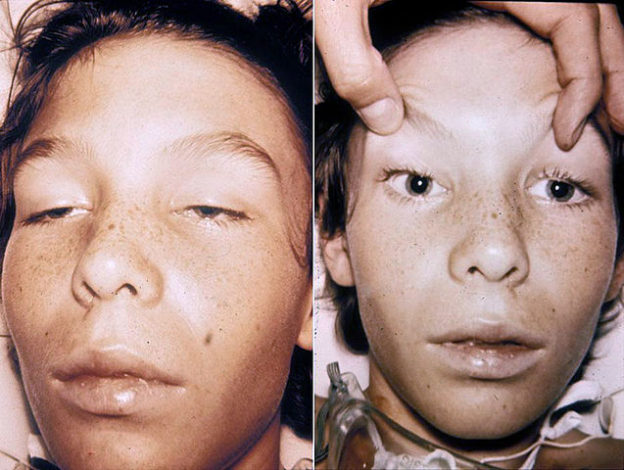 Image: “Five days after sustaining a compound fracture of his right arm, this 14-year-old boy noticed that he had blurred vision. Four days later, he could not swallow, move his lips, or protrude his tongue. Other findings included bilateral total ophthalmoplegia with ptosis (left) and dilated, fixed pupils (right). His mental status and sensory examination were normal. When symmetric, descending cranial nerve paralysis develops four to 14 days after an open injury and spares mental and sensory function, think of wound botulism. In this patient, culture of serosanguineous fluid from the fracture site grew Clostridium botulinum.” by Herbert L. Fred, MD and Hendrik A. van Dijk. License: CC BY 2.0

Botulism is a disease of neuromuscular paralysis, secondary to a neurotoxin secreted by the Clostridium botulinum bacteria. Infant botulism is the most common form of botulism worldwide. Other forms of botulism that affect older age groups include:

Although infant botulism is more common in children between the ages of 2 and 8 months, it can occur any time up to the age of 1. It is a rare disease that affects up to 100 children annually in the United States.

The disease arises from neurotoxin secreted from C. Botulinum bacteria that is acquired through various mechanisms such as:

C. botulinum is a group of gram-positive anaerobic bacilli that can form spores during unfavorable environmental conditions. The spores are heat resistant up to 100ºC for hours, and therefore can be easily transmitted via food. With low acidity, oxygen, and appropriate temperatures, the spores germinate into a toxin-producing bacteria.

The bacteria are commonly isolated from the soil and can be found on the surfaces of vegetables and fruits. The toxin produced by C. botulinum is the most potent toxin known; a very low level of the toxin can be lethal. It is a heat-labile protein that can be easily denatured by temperatures above 80ºC. However, it can resist the gastric acidity and proteolytic enzymes of the gut. It is easily absorbed through the stomach or the intestinal mucosa to the bloodstream.

The botulinum toxin affects the presynaptic cholinergic transmission of sensory, motor, and autonomic nerve fibers, leading to neuromuscular paralysis. It reaches the central nervous system through systemic spread or axonal transport and can inhibit the release of dopamine, serotonin, somatostatin, gamma-aminobutyric acid, and noradrenaline from presynaptic neurons.

The disease has an incubation period of between 3 and 30 days, after which patients present with symmetric descending weakness with bilateral cranial neuropathies without fever or mental dysfunction. Weakened muscles supplied by cranial nerves followed by weakness of the limbs and diaphragm are characteristic.

Some cases have gastrointestinal symptoms as the most predominant symptom. In infants younger than 12 months of age, colonization of the intestine with the bacteria presents early on with constipation; this may be the 1st sign. This is followed by progressive hypotonia and loss of deep tendon reflexes. Cranial neuropathies present with a weak cry, poor sucking and feeding, drooling, ptosis, and pupillary paralysis. Autonomic dysfunction may be present with dry mouth, dry eye, and fluctuating heart rate and blood pressure.

Ingestion of the preformed toxin in foodborne botulism presents first after a few hours with:

Clinical suspicion is important, as early administration of antitoxin therapy is lifesaving while waiting for culture results and confirmatory tests. Detection of the botulinum toxin in the serum of suspected individuals is diagnostic.

The toxin can also be isolated in stool, vomit, and food remnants. Repetitive nerve stimulation and electromyography can be used to differentiate between myasthenia gravis, LEMS, and botulism, especially wound botulism. Cerebrospinal fluid is usually normal.

In infant botulism, the spores and toxin can be isolated from the stool of infected infants but not in the serum. The diagnosis usually takes a few days until the results of the culture are positive or the toxin is detected in stool samples.

Patients with suspected botulism should be monitored closely in the hospital or even the intensive care unit to ensure adequate respiration and oxygenation. Many patients will need intubation and mechanical ventilation to prevent respiratory failure and airway compromise. Adequate feeding should be continued for prolonged respiratory support with a nasogastric tube or even parenteral nutrition.

Antitoxin therapy should be administered to all patients based on clinical suspicion of botulism without waiting for confirmatory tests. This therapy is proven to decrease mortality rates for patients diagnosed with botulism even after a long period of symptoms. Patients presenting with a febrile descending paralysis and cranial neuropathies should also be evaluated for botulism.

There are 2 types of antitoxin therapy: equine serum heptavalent botulism antitoxin and human-derived botulism immunoglobulin. Equine serum heptavalent botulism antitoxin therapy includes antibodies against 7 types of botulinum toxins. It is mainly administered to adults and children older than 1 year of age. A hypersensitivity reaction with anaphylaxis and serum sickness can result from the equine serum antitoxin; thus, a skin test, desensitization, and proper dosing are important prior to therapy. Other adverse effects include rash, nausea, fever, headache, and chills.

Human-derived botulinum immunoglobulin therapy is used for infants younger than 12 months of age.

Antibiotics can be given to patients with wound botulism due to infection, but they are contraindicated in patients with infant botulism or foodborne botulism. Antibiotic-mediated lysis of the Clostridium bacteria can increase the toxin amount and its absorption in the circulation.

Prevention of foodborne botulism depends mainly on the proper canning of food. Boiling of food before consumption is sufficient to denature the heat-labile toxin. For infant botulism, prevention is mainly achieved through the avoidance of honey in infants younger than the age of 1. Early treatment is mandatory in infants with no history of honey consumption.

Avoidance of exposure to dust in areas that have high toxin content in the soil has also been shown to reduce the occurrence of the disease.