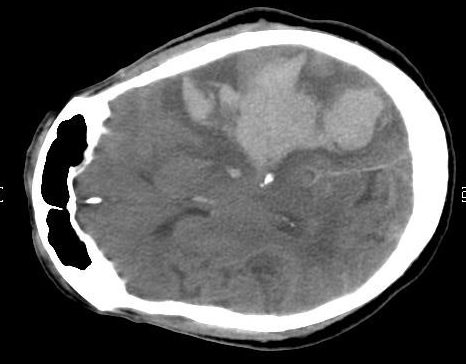 However, raised ICP can be diagnosed via thorough history and examination. It is often the case that therapy must be started even before monitoring can be initiated. Therefore, knowing how to identify raised ICP in clinical practice is incredibly important.

Monro-Kellie doctrine says that the brain is a defined “box” of incompressible space, i.e., that the volume inside the cranium is fixed. There are a number of constituents to the inside of the cranium (blood, CSF, brain tissue) and an increase in any one volume will decrease the volume of another.

The brain tissue (or parenchyma) usually makes up around 80 % of the fixed internal volume (which itself is usually between 1400 and 1700 mL). The CSF makes up around 10 % of the total volume (around 150 mL) and blood—the final 10 %. As discussed previously, when any of these increases, either the others must decrease, or the intracranial pressure must increase (or both processes occur simultaneously).

Intracranial pressure is raised by a number of pathological processes including masses (like tumors), abscesses and blood collections (hematomas). Impaired CSF flow can also cause a rise in intracranial pressure. This is because CSF is produced in the choroid plexus (amongst other areas) and is reabsorbed by arachnoid granulations back into the venous system. Blockages can stop the reabsorption of CSF, thus increasing its volume and raising intracranial pressure.

Herniation can occur when focal or global pressure force portions of the brain into the wrong area. For instance:

When the intracranial pressure increases beyond a certain point, herniation can occur. These can be:

A patient with raised intracranial pressure will usually have a headache. The current reasoning is that this is the result of cranial nerve V pain fibers running along the dura and blood vessels. Patients may also have reduced consciousness, which can be from local lesions or from pressure pushing on the reticular formation (which is a structure in the brain stem involved in consciousness). Patients may also experience vomiting.

On examination, fundoscopy should be performed. Often, raised ICP can be visualized as papilledema. A full cranial nerve examination should be conducted as cranial nerve VI palsies are common with raised ICP (cranial nerve VI, the abducens nerve, controls the lateral rectus muscle of the eye. Patients will present with eye resting in the adducted position. They may complain of double vision or “diplopia”).

Other symptoms and examination findings are localized and can be different depending on the localization of the lesion. Herniation syndromes can also result in neurological deficits.

The only truly reliable diagnosis is investigation via IVP monitoring, although most diagnoses will rest on clinical findings and a good history.

Below is a summary of the major reasons that cause an increase in intracranial pressure. Usually, the differential diagnosis for patients with raised ICP will be much smaller than this list as patients don’t usually present with “raised intracranial pressure” and diagnosis is more obvious given the total clinical picture. However, this is an important list to keep in mind if the immediate cause is unknown.

Space-occupying lesions are self-explanatory in that they are tumors or hematomas. Cerebral edema can be caused by a number of things including traumatic brain injury, an infarction, and ischaemic encephalopathy.

A choroid plexus papilloma can cause an increased CSF production whilst decreased production can be the result of adhesions on the arachnoid granulations (typically the result of meningitis). An obstruction in the venous outflow can be from a venous sinus thrombosis or jugular vein compression.

Monitoring the patient with raised ICP

Although early interventions will often be performed without direct monitoring of raised ICP, therapies are reversible. Therefore, the ultimate treatment goal should be the placement of an ICP monitoring device. CT scans can show a raised ICP (i.e., with the presence of a tumor or a hemorrhage), however, they are unreliable, and other methods to define ICP should be performed.

Intraventricular monitors are considered the gold standard. Infection risk is very high with this equipment and occurs in some 20 % of the patients. There is also a small but substantial risk of hemorrhage (at around 2 %)—this risk is greater in those with coagulopathies.

Other methods of measuring ICP include intraparenchymal devices (that are inserted directly into the brain parenchyma via a small borehole in the skull), subarachnoid bolts or epidural monitoring devices.

Treating the patient with raised ICP

Many simple end-of-the-bed practices can make a huge difference. Raising the head of the bed by 45 degrees or not putting circumferential tape around the neck for securing ETT (jugular venous pressure) are some examples.

Patients should be hyperventilated with around 25—30 mm Hg of PCO2, although this is not absolute. Hyperventilation works because CO2 induces vasodilation and decreasing the level of CO2 from hyperventilation can decrease the volume of intracranial blood, resulting in lower ICP. It is useful in raised ICP as a result of cerebral edema, intracranial hemorrhage or tumor.

However, its use is not indicated in those patients suffering from traumatic brain injury or acute stroke. This is because it reduces cerebral perfusion and can worsen neurological outcomes. As such, the underlying cause of raised ICP should be discussed before hyperventilation.

Patients can also be administered antiepileptic therapies because the raised ICP puts them at an increased risk of developing seizures, and these can complicate the clinical picture. As such, antiepileptics should be prescribed to an individual where a seizure has happened or has been suspected to have occurred. Prophylactic treatment can also be given, but currently, there are no clear guidelines as to when and where to apply it.

In many cases where the underlying cause is not known or is untreatable, diuretics can be given to reduce blood volume and thus, ICP. The first line diuretic is usually Mannitol at 2 g/kg (although some evidence suggests it should be given at 0.5 g/kg).

Hypertonic saline can be given to acutely lower the ICP. The volume of saline is governed by no guideline and will be different between hospitals. Some studies have suggested that hypertonic saline bolus is more efficacious than Mannitol.

In patients with a CNS neoplasia, IV steroids (Glucocorticoids) are indicated and have a role in the management of the condition. In ICP raised due to hemorrhage and severe head injury these therapies are associated with a worse outcome in large controlled trials and should not be used.

In some instances, CSF can be removed to relieve ICP. This is indicated in patients with hydrocephalus. CSF can be removed at a rise of 1—2 mL a minute for 2 minutes per procedure. Patients may also undergo decompressive craniotomy, whereby the finite volume that can be housed in the skull is increased, therefore reducing pressure on the brain parenchyma, etc. However, this surgery is not without complications as herniation can occur and infection or hemorrhage may worsen the clinical picture.

Tuite, G., Chong, W., Evanson, J., Narita, A., Taylor, D., Harkness, W., Jones, B., Hayward, R. and Eppley, B. (1997). The Effectiveness of Papilledema as an Indicator of Raised Intracranial Pressure in Children with Craniosynostosis. Journal of Craniofacial Surgery, 8(1), p.81.