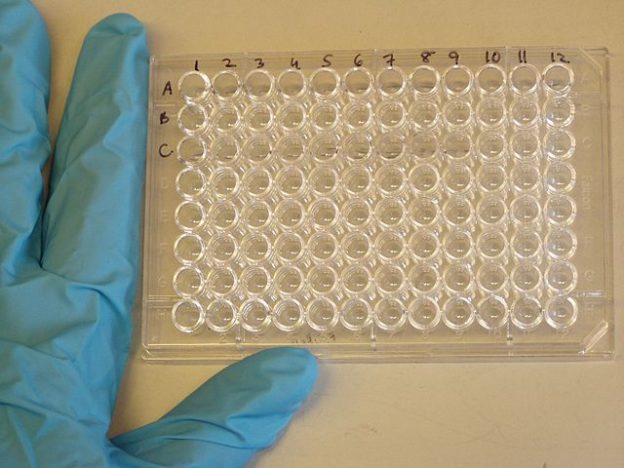 Evidence attests to the first use of immunology as a diagnostic tool when a test for serum insulin was performed. Since then, it has developed into a science, a discipline of using antigen-antibody reactions as primary means of detection of molecules. The can be used to detect even a small number of molecules.

The methods are admired for their speed, accuracy, and simplicity in arriving at the diagnosis of the disease. The various tools in the armamentarium of immunodiagnostics are described in the sections below.

Originating from the Latin word “agglutinare,” which stands for “gluing to,” agglutination is said to occur if an antigen is mixed in a solution containing its corresponding antibody; also known as “Isoagglutinin.” Agglutination of antigen-coated particles is frequently used for detection of specific antibodies. Common examples of the use of agglutination are blood grouping techniques and identification of Rheumatoid factor as well as the autoantibody to Fc component of gamma globulin in Rheumatoid arthritis assessment.

Nephelometry is used for quantification of proteins in the serum, plasma or cerebrospinal fluid. The principle is to measure forwarded scattered light when a laser beam passes through a sample and the light is deflected by the particles. proportional to the turbidity of the solution. The amount of scattering is measured, compared to known mixtures, and then the amount of unknown is determined using standard curves.

The specific polyclonal antibody and the analyte in the test sample interact and immune complexes are formed. Light from a laser light source results in the scattering of the molecules. The light scattered onto the receiving photodiode is proportional to the number of complexes (that is, the concentration of the analyte).

There are 2 types of nephelometry, summarized as below:

Used for the isolation of a specific antigen from a mixture of antigens, this technique entails adding an excess of immobilized antibody specific for the antigen of interest in the solution, collecting the immobilized antibody by centrifugation, washing with fresh solution to remove unbound antigens and then subsequently denaturing the antibody to elute the antigen.

A prerequisite for immunoprecipitation is the potential coupling of the antibody to a solid substrate at some point of time during the procedure.

The types of immunoprecipitation can be summarized as follows:

It is based on the principle of differential segregation via diffusion through a substance such as agar.

It is also known as agar gel immunodiffusion or passive immunodiffusion. It is an immunological technique used to identify and quantify immunoglobins and extractable nuclear antigens.

It is done by making a series of wells on the gel agar and antigen is placed on one and the test sera placed on the other to check for the presence of antigens.

The plate is left for 48 hours as the contents diffuse across and meet and if the antibody and antigen reaction takes place a white precipitate is formed in the form of a straight line known as a precipitate line.

Radial immunodiffusion is used for quantification of antigens. Agarose gel containing a specific polyclonal antibody is allowed to stand for 24 to 48 hrs. As the analyte diffuses into a gel, the specific antibody binds to the antigen of interest and a precipitate forms. The size of the precipitation ring depends on the quantity of loaded analyte.

Electrophoresis is commonly used to achieve separation of serum proteins.

First observed by Ferdinand Frederik Reuss from Moscow, this electrokinetic experience is based on the motion of particles relative to the suspending medium under the influence of an electric field. Electrophoresis of cations is termed as Cataphoresis, while that of negatively charged particles is known as Anaphoresis.

Polyacrylamide gel provides improved clarity and segregation and, hence, is used in quantitative analysis of DNA and RNA.

Electrophoretic transfer of proteins to the membrane is followed by labeling of the proteins in the membrane using a primary antibody specific for the antigen of interest as well as a secondary one specific for the primary antibody. The latter is tagged with an enzyme. A substrate is added, which emits light when cleaved by the enzyme. The use of an antibody-labeled membrane, with light-emitting substrate added to expose film, completes the process.

Biochemical tests using antibodies or, occasionally, antigens to detect macromolecules in a solution constitute “immunoassays.” The entity thus detected is known as “analyte.”

Immunoassays typically involve the use of specific molecules which have the potential to conjugate to the molecule of interest. These molecules are termed as “labels.” Different types of labels used to define the type of immunoassay performed. The significant ones can be summarized as follows:

These high-yield assays involve the use of pre-coated, color-coded beads, which are covered with the analyte-specific antibody for segregation of the molecule of interest. They find use in the diagnosis of Hepatitis A, for instance, where the amount of signal emitted at the end is proportional to anti-Hep A antibody in the patient’s serum.

These methods are primarily used on body tissues to determine specific biomolecule targets conjugated to antibodies with tagged fluorescent dyes. Immunofluorescence is a very important diagnostic tool and can be considered a subset of immunohistochemistry where fluorophores are used to determine the location of specific antigens and antibodies.

There are 2 types of immunofluorescence as summarized below:

Direct immunofluorescence uses a single, primary antibody, chemically linked to a fluorophore. In this test, the biopsy sample is placed on a slide, and fluorescein-labeled sheep antibodies against the antigen of interest are added. Under ultraviolet light, the fluorescein label emits visible light over the antigen of interest. The tissue used can be of animal or human origin, as long as it contains the antigen. Then, the patient’s serum is added. Next, autoantibodies bind to the antigen. Fluorescein-labeled sheep anti-human IgG is added, which binds to the IgG. Bound IgG is detected under ultraviolet light.

Fluorescein-labeled anti-human immunoglobulin antibody and the patient’s serum are used with substrate tissue from rat liver, kidney, and stomach.

The 2 kinds of IHC assays can be tabulated as follows: 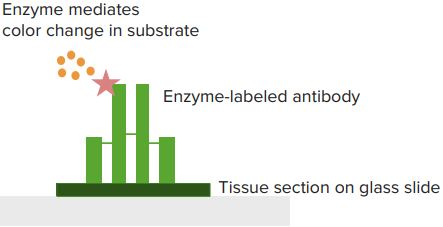 The enzyme mediates a color change when the substrate, enzyme-labeled anti-human antibody, the patient antibody, and the tissue section form a conjugated complex on the glass slide.

Flow cytometry is a laser or impedance-based technology employed in cell counting, cell sorting and applied in protein engineering. The slow stream passage of fluid containing various molecules of cells of interest through an electronic detection apparatus allows simultaneous appreciation of the multitude of physical and chemical characteristics of about a thousand particles per second.

Flow cytometry finds application in diagnosis of cancer markers, biomarker detection, cytology, and proteonomics. Additional linking of the analytical capability of the flow cytometry to a cell sorter is also possible for purification and separation of proteins of interest.

Some of the common applications of flow cytometry are mentioned below:

Being a scientific instrument of crucial significance, FACS employs flow cytometry to sort a heterogeneous mixture of different kinds of biological cells based on light scattering and fluorescent properties of the cells in question.

A mixed population of cells labeled with fluorescent antibodies is put forward the scatter detector. Parallel plates are used to detect flowing cells. An analyzer computer makes final analysis, with the results showing on the computer display.

There are various tests of direct clinical relevance for the evaluation of cellular activity based on the modern concepts of immunohistochemistry, immunofluorescence. Therefore, immunodiagnostics can be summarized as follows:

The production of various antibodies can be summarized as follows:

Animals are inoculated with the antigen of interest. After multiple injections, the animals are supposed to have developed antibodies against the antigen. Blood is extracted from the animals and required polyclonal antibody is isolated, purified and refined to serve in diagnostic and therapeutic ways. Animals used are mammals: mouse, rabbit, sheep, and goat.

The cells are cultured in a selective medium such as the HAT medium. After several days, only fused cells will survive. Cells are diluted so that one cell is plated per well. Cells are grown in individual culture plate wells, and culture supernatants from wells containing growing hybrid cells are screened for the presence of the desired antibody by ELISA. This clone hybridoma is an immortal producer of the desired monoclonal antibody.

In “phage display,” the gene contributing to the production of the antigen of interest is introduced into a phage coat protein gene. This causes the gene to “display” the protein externally, while the gene is present internally. These displaying phages are systematically screened and then isolated to form the source of production of the required antigen.

Immunodiagnostics as science has progressed rapidly and extensively. Various techniques, based on the unique antigen-antibody reaction, are developed to isolate, quantify or produce the specific molecule of interest.

Immunodiagnosis involves the use of tests like Agglutination, Nephelometry, Immunoprecipitation and Radial Immunodiffusion to determine the desired antigen. Electrophoresis and Western Blot uses protein separation techniques based on differential migration of molecules across an electric field to separate different genres of proteins present in a given sample.

Immunoassays such as ELISA, RIA, and Luminex:tm use labeled antibodies to isolate and identify antigens of interest. The labels commonly used are enzymes, radioactive isotopes or chemiluminescent substances.

Immunofluorescence and Immunohistochemistry use appropriately labeled antibodies to detect the antigen of interest, especially in biological tissues. Flow Cytometry involves simultaneous evaluation of a multitude of properties of a myriad number of molecules as the solution suspending them is passed slowly across an electronic detection apparatus.

Fluorescence-Activated Cell Sorter (FACS) is a scientific instrument based on flow cytometry, with extensive applications in cytology like cell counting, cell sorting, and study of the cellular property. The cellular activity can be measured with the help of immunodiagnostics.

Various antibodies such as polyclonal and monoclonal can be commercially produced using advanced molecular biological techniques like production of hybridomas, phage display, and cell culture.