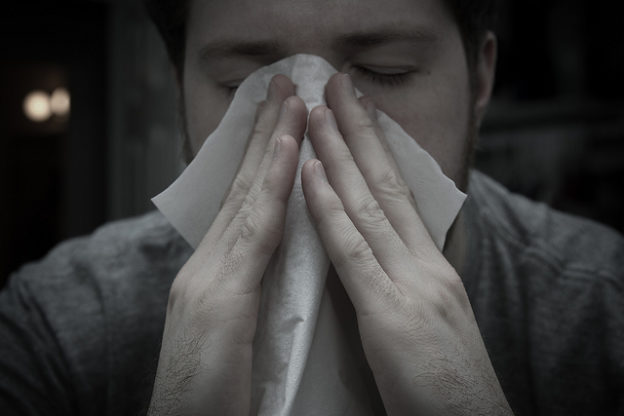 The nonspecific immune system, also known as the innate immune response, is composed of the cellular and humoral nonspecific defenses. Both systems are complementary in their functions.

Components of the Immune System

Monocytes are phagocytes with the additional ability to expose foreign substances to the specific immune system.

Macrophages are phagocytes that develop from monocytes and specialize depending on their location. Thus, a macrophage that is located in the connective tissue is called a histiocyte.

Granulocytes are leukocytes and are divided into 3 types:

Images: Biology. By: Wikiversity Journal of Medicine by Blausen Gallery. License: CC BY 3.0

Lysozyme
The lysozyme is defined as a type of enzyme that destroys the cell wall of bacteria and can be found in saliva, tear fluid, etc.
Cytokines
Cytokines are messenger substances that aid communication between leukocytes. Thus, they provide a coordinated immune response to pathogens. There are 3 different types of cytokines as follows: 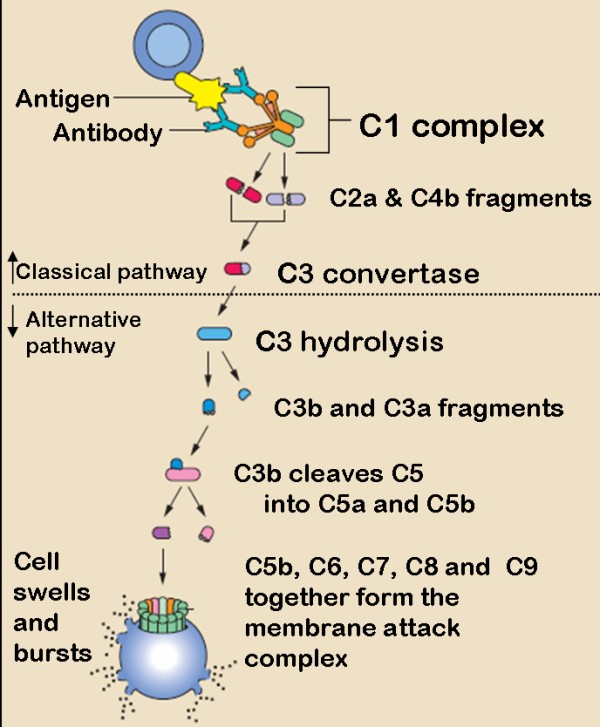 Components of the specific immune response

Antibodies are immunoglobulins that are formed by plasma cells, which, in turn, are derived from B lymphocytes. There are 5 types of antibodies: 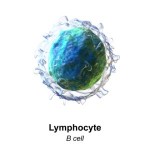 B lymphocytes are cells of the humoral immune defense which, after antigen contact with the B lymphocyte receptor, turn into plasma cells and B memory cells through cell division.

The plasma cells produce antibodies (immunoglobulins) in the Golgi apparatus and endoplasmic reticulum of the cell and are, therefore, defined as the ‘actual antibody producers’.

After the initial infection, the B memory cells remain in the body and lead to a faster immune response in case of reinfection with the same pathogen. 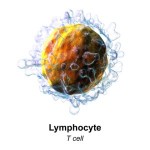 T lymphocytes originate from stem cells in the bone marrow and migrate to the thymus where they mature and specialize.

Upon activation of antigen-presenting cells, T helper cells bind to B lymphocytes in order to secrete cytokines.

The functions of cellular immunity are carried out by cytotoxic cells or T killer cells. With their receptors, they bind to exogenous or infected cells and destroy them using perforins (destruction of the pathogen cell membrane) and granzymes that penetrate the foreign cell and cause apoptosis (cell death). 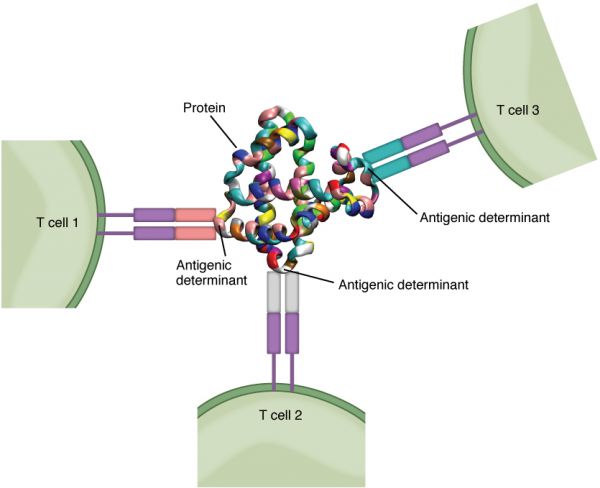 Components of the organic immune defense

The lymphatic system consists of organs that produce, specialize, and locate immune-active cells. This system is divided into the primary and secondary lymphatic systems.

The primary lymphatic system includes the bone marrow and thymus.

Physiology of the Immune System

The immune response becomes effective when the body is confronted by pathogens. It is important to know that the immune response only starts the moment a pathogen overcomes the mechanical protective barriers of the body. The types of immune responses can be classified based on various parameters.

Classification according to time of development

In this classification, the nonspecific innate immune response is distinguished from the adaptive specific response.

In the nonspecific immune response, the pathogen is first engulfed and destroyed by phagocytes. This is the so-called receptor-mediated phagocytosis, which is performed by macrophages and granulocytes. The emerging fragments of the pathogen are then presented to the cells of the specific immune defense (B and T lymphocytes)—a process that is called opsonization.

The adaptive specific immune response is directed against a specific antigen that is already known to the body. Two systems of adaptive immunity protect all vertebrates, namely, cellular and humoral immunity. In cellular defense, the T lymphocytes are active, while in humoral defense, the antibodies of B lymphocytes are active. For viral infections, cytotoxic T cells (killer T cells) are activated by the presented antigen and destroy the foreign cell using perforins and granzymes. The effects of both classes of immune responses may be harmful or beneficial and are mediated by cells of the highly distributed lymphoid system.

The adaptive specific immune response is more complex than the innate response. It is characterized by the following:

Within the specific immune response, it is important to make a distinction with regard to the major histocompatibility complex (MHC), as there are responses of Class I and Class II MHC molecules. MHC molecules are integral plasma membrane proteins that are important in antigen presentation during the immune response.

Adaptive immunity is often subdivided into 2 major types depending on how the immunity was introduced.

Both naturally and artificially acquired immunity can be further subdivided depending on whether immunity is induced in the host or passively transferred from an immune host. Thus, we have the following:

Passive immunity is acquired through the transfer of antibodies or activated T cells from an immune host and is short-lived, usually lasting only a few months, whereas active immunity is induced in the host by an antigen, and lasts much longer, sometimes throughout life. The figure below summarizes these types of immunity. 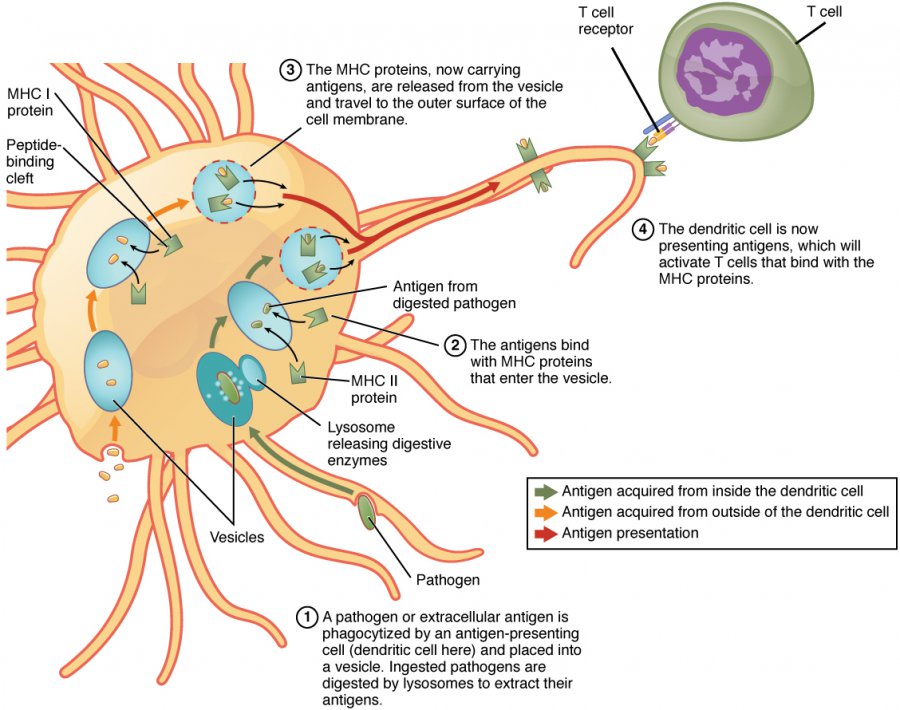 Classification according to involved components

In this classification, there is an important distinction between the cellular and humoral immune responses.

Diseases of the Immune System

There is a specific difference between 2 forms of immunopathology: autoimmune diseases and allergies.

In autoimmune disease, antibodies attack endogenous tissue. Here, the physiologic immune tolerance a person has acquired during his/her lifetime is lost. Well-known examples are juvenile diabetes mellitus, ulcerative colitis, or autoimmune thyroiditis (Hashimoto’s disease). One possible treatment is immunosuppressant therapy; however, this is not directed at the cause and only provides symptom relief by alleviating the autoimmune reaction.

Allergies are hypersensitivity reactions of the immune system to one or more certain antigens. Any substance that can elicit an allergic response is referred to as an allergen. However, an allergen can only be effective in causing an allergic reaction if the recipient has been previously sensitized i.e. antibodies of the IgE class directed against the allergen must be present in the tissues. A predisposition to allergies is called atopy. Typical allergy-related diseases include asthma, hay fever, or eczema. There are 4 basic types of allergic reactions, which are caused by different immunoglobulins.

Allergies are treated via desensitization therapy with allergen extracts either subcutaneously (SCIT) or sublingually (SLIT). This therapy involves deliberate immunization with small but increasing amounts of a particular purified allergen over months or years. The effectiveness of this procedure is thought to result from the induction of high levels of IgG antibodies, which can prevent allergic reactions by competing for the allergen and preventing it from reaching mast cell-bound IgE.

Avoidance of allergens is the single most important and effective method of managing allergic states. This may include eliminating known allergens from one’s diet (nuts, milk, eggs, etc).

Drugs can be useful for preventing and treating allergic reactions. Antihistamines inhibit the binding of histamine to its receptors (but will not affect the target tissue response once histamine is bound). Corticosteroids are anti-inflammatory (useful for the late-phase response), and can also inhibit histamine synthesis. Cromolyn sodium is known to stabilize mast cells.

Isoproterenol, salbutamol, and epinephrine can be used to counteract the effects of several of the mediators released by mast cells, and unlike the drugs mentioned above, they can be effective in controlling an ongoing allergic reaction. Prompt treatment of a systemic anaphylactic reaction (to food, drug, or insect bite, for example) can be lifesaving. For very severe allergies, immunosuppressants can be administered.

Diagnostic tests for immediate hypersensitivity include:

Total IgE and specific IgE antibodies are measured by a modification of the enzyme immunoassay (ELISA).